” … [Israel Shamir] says the Teheran Holocaust Conference of 2006 ‘proved that the Holocaust dogma is a basic tenet in the great world-embracing brainwashing machine of mass media,’ and added that the prevalence of Holocaust awareness and education ‘show that the mass media machine is well integrated and concentrated in philosemitic, mostly Jewish hands.’ … “ 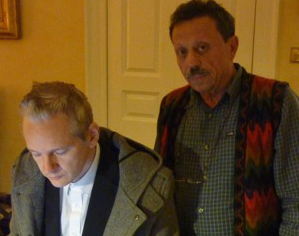 Digital state secrets exposer WikiLeaks has employed an Israeli-Swedish anti-Semite and Holocaust-denier, according to reports published this week in American and Swedish news outlets.

According to New York magazine and Reason magazine, a WikiLeaks spokesman confirmed that a self-titled “leading Russian-Israeli writer” who goes by the name “Israel Shamir” works for the organization as its content aggregator in Russia, where he selects and distributes cables to Russian news outlets.

A similar report was made by the Swedish Radio program Medierna, in a broadcast this week in which it stated that “Israel Shamir represents WikiLeaks in Russia.”

Shamir’s website doesn’t give any solid confirmation of his employment at WikiLeaks, but it does have on its home page a very prominently displayed picture of Shamir and WikiLeaks founder Julian Assange, reportedly taken at the organization’s headquarters in Sweden. In the picture, Shamir stands behind Assange, looking into the camera as the WikiLeaks founder types on a laptop.

In an entry titled “On the Good Ship Cablegate,” Shamir refers to Assange as “our real-life Neo,” battling what he describes as the matrix of “American Imperium,” a reference to the 1999 Wachowski brothers’ action film. He also describes Assange as being hounded by “castrating feminists and secret services.”

Shamir has a shadowy past and present that is hard to pin down or confirm. His official biography on his website says that he was born in Novosibirsk, Siberia, in 1947 and moved to Israel in 1969 where he served as a paratrooper during the Yom Kippur War. He later reportedly worked for the BBC and translated the works of Nobel laureate Shai Agnon from Hebrew to Russian.

Along the way, he published a number of anti-Israel and arguably anti-Semitic books including Cabbala of Power, Galilee Flowers and Masters of Discourse.

Shamir also goes by the names Joran Jermas and Adam Ermash, having received the latter title in 2004 when he was baptized into the Greek Orthodox Church of Jerusalem. He is a Swedish citizen and spends much of his time in Stockholm.

Other entries on Shamir’s website make his feelings on Israel and Jews and the Holocaust clear. In one titled “Return of the Body Snatchers,” Shamir defends Swedish tabloid Aftonbladet’s 2009 report that IDF soldiers stole organs from dead Palestinians, saying, “It fits into a larger pattern. All over the world, Israel and Israelis are involvecd in trafficking human flesh, this modern form of cannibalism.”

The website includes other defenses of blood libels and one entry that states “Jews asked God to kill, destroy, humiliate, exterminate, defame, starve, impale Christians, to usher in Divine Vengeance and to cover God’s mantle with blood of goyim,” and that “the picture of Jews slaughtering children for cultic reasons exerted huge impact on the Christian peoples of Europe.”

Other writings by Shamir show him to be an avowed Holocaust-denier, including one entry where he says the Teheran Holocaust Conference of 2006 “proved that the Holocaust dogma is a basic tenet in the great world-embracing brainwashing machine of mass media,” and added that the prevalence of Holocaust awareness and education “show that the mass media machine is well integrated and concentrated in philosemitic, mostly Jewish hands. The occupation of Palestine by Jews is painful, but it is not more harmful than this captivity of free discourse.”

Shamir, who purports to live in Jaffa, could not be reached by e-mail or phone for comment on Thursday.

A man who claims to be one of Israel’s leading intellectuals is also a Swedish antisemitic writer. Israel Shamir presents himself on his website as a leading Russian-Israeli intellectual and a writer, translator and journalist. But in 2001 he changed his name to Jöran Jermas and has surrounded himself in Sweden and Norway with antisemites and strange conspiracy theorists.

By Tor Bach, Sven Johansen and Lise Apfelblum | Searchlight |  May 2004

Shamir also claims to have occupied a string of important positions as a translator of classical works and to have worked as a journalist in several heavyweight media institutions, including for the major Israeli paper, Haaretz. However, when Monitor started investigating Shamir’s past last year, it found no evidence that Shamir had ever held these positions. His supposed job as Moscow correspondent for Haaretz turned out to consist of just a few freelance articles.

The Swedish Census Registry does give a few clues about Shamir and his movements. It shows that his name was entered onto the Registry in October 1984 and he later obtained Swedish citizenship. According to the register he still lives in Dalagatan, Stockholm, not in Jaffa, Israel, as he publicly claims. Shamir’s first wife and two sons also live in Stockholm.

In July 1993, Shamir emigrated to Russia and later to Israel, where he married again in July 1994. He and his new wife returned to Sweden in autumn 1998.

Shamir, who claims to be one of Israel’s leading intellectuals, has concealed the fact that he has lived in Sweden for a long time. Another strange fact is that there are hardly any references to Shamir on the internet before 2001, the same year in which he changed his name. This was a strange time to do this, just as he was being noticed and had started to publish his works under the name of Israel Shamir.

Jermas’s translator in Norway is Hans Olav Brendberg, a teacher, who was recently asked to leave the executive committee of a branch of the Red Electoral Alliance (RV). The left-wing RV, which took 1.2% of the vote in the general election in 2001 and has over 80 local councillors, accused Brendberg of making anti-Jewish statements on the internet and in his work as Jermas’s translator.

Brendberg, 35, stirred up controversy after writing articles for the left-wing daily Klassekampen in which he charged the Jews with killing Christ and hating all non-Jews. But it is through the KK-forum, Klassekampen’s semi-official web-based discussion forum, that Brendberg has gained most notoriety for statements such as: “Millions of nice Germans have always existed but not one of them is mentioned in Anne Frank’s Diaries. As for the broader picture: is not the world bigger than the attic of a Dutch city apartment block?”

On several occasions, Brendberg has referred to Kevin MacDonald, an extreme right-wing American, as an authority on Jewish matters. MacDonald, a professor at an obscure Californian university, is a white racist, antisemitic, anti-black, anti-left apologist for Hitler’s genocide and an inveterate fascist.

MacDonald is perhaps most infamous for his claim that the Jews have effected a breeding programme to conquer other “races”. He appeared in court as a witness on behalf of David Irving, the British quasi-historian and Hitler admirer, in his libel case against Deborah Lipstadt.

In his books MacDonald alleges that Marxism and the Russian revolution of October 1917 are Jewish conspiracies. He also claims that the Jews and Asians are threatening to wrest power from the Europeans in the USA and considers it genetically dangerous to “import Africans”. Brendberg regards MacDonald’s books as classical, academic works worthy of critical debate.

Shamir has found other, even more extreme friends in Sweden. One of his Swedish translators, Lars Adelskog, is not only a leading figure in the Swedish UFO movement but can also be found in the jungle of conspiracy theories where the Illuminati, the Freemasons and lizards in human form are supposedly working together to end civilisation as we know it.

Adelskog was previously the editor of the Swedish “alternative” magazine Nexus, where he also spread his pet conspiracy theories. The Nationalsocialistisk Front later touted unsold issues of Nexus through its website.

Jermas/Shamir himself is no stranger to conspiracy theories. When he visited Norway in 2001, he made the laughable claim in the mainstream newspaper Adresseavisa that many Jews received text messages warning them to get out of the World Trade Centre in New York before the terror attacks of 11 September.

Another outlet that eagerly promotes antisemitic conspiracy theories is the Russian magazine Zavtra and its editor Alexander Prokhanov. While in Moscow, Jermas worked as a journalist for Zavtra, which has been described as Russia’s most antisemitic rag. When the notorious racist and former Ku Klux Klan leader David Duke went to Russia to promote his new book, Jewish Supremacism, and his National Association for the Advancement of White People, it was on Prokhanov’s invitation.

Despite the dogs with which he is willing to lie down, Jermas does not seem afraid of catching fleas. In the USA, Alex Linder of Kirksville, Missouri, who has seemingly fallen from grace in the nazi National Alliance (NA), has set up his own outfit called the Vanguard News Network. Lindner is eagerly promoting a forthcoming congress of Holocaust liars in Sacramento this year and published parts of a peculiar email correspondence with Jermas, posing under his old name of Shamir.

According to Lindner, Bob White the NA leader had told Jermas that the conference had been called off. Then Jermas told Lindner in an email that if the conference were to go ahead he would be interested in taking part as a speaker, “provided:

“1) There will be no leak about my coming until the day of my coming, and

“2) You can pay for trip for me and my wife including flexible return flight tickets, hotels and two hundred dollars a day for food and similar expenses, plus 1,000 dollars speaker’s fee.

“If you can’t afford it, I shall supply you with my talk and you may read it or distribute it the way you like.

“In any case, I would advise to keep this exchange entres [sic] nous, as premature publicity would severely undermine our ability to communicate freely.”

Jermas’s demands must have confirmed all Lindner’s beliefs about “greedy Jews”. As he put it: “Who does he think he is? Not even Horst Mahler has made demands like this.”

Jermas is also a keen propagandist. He poses as a friend of the Palestinian people and claims to be promoting systematic criticism of the state of Israel. Because of this several of his writings have been quoted in international debates on the Middle East.

However, leading Palestinian representatives do not share this view. Ali Abunimah, a prominent media critic on the Electronic Intifada website, and Hussein Ibish, press spokesman of the American-Arab Anti-Discrimination Committee (ADC), warned as early as 2001 that Shamir was an antisemite and not just against Israel. They claimed that his opposition to Israel was no less than a rehash of the classical elements of the European antisemitic tradition.

Brendberg has consciously chosen to convey Shamir’s views and other politically toxic material to the Norwegian public. Questions are being asked whether a person who spreads such views on Jews should be allowed to work as a religious education teacher in the state school system. Christine Mohn, the leader of the Norwegian Association against Antisemitism, left no doubt about her view: “No, definitely not!”