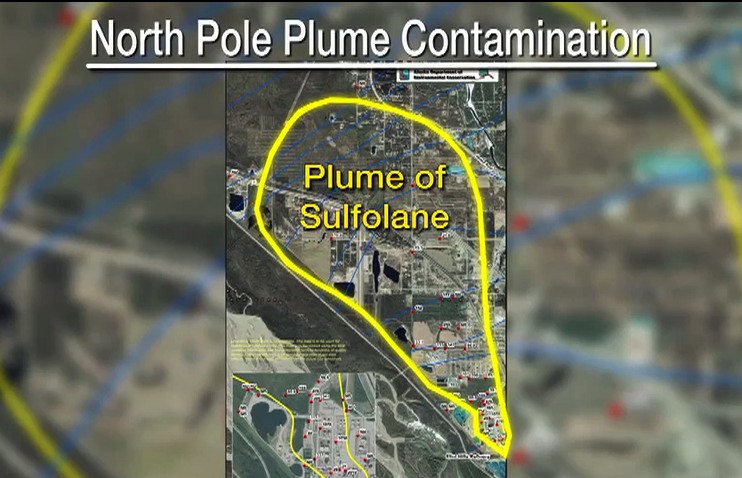 The Christmas season probably isn’t the best time to be the subject of a lawsuit for polluting North Pole.

The city of North Pole, Alaska, is suing an oil refinery owned by the billionaire Koch brothers for alleged water contamination. The lawsuit names Flint Hills Alaska Resources, owner of the Earth Resources refinery, for allowing the chemical sulfolane to leak and seep into the town’s groundwater supply.

In the complaint, North Pole says, “The presence of sulfolane contamination in the city’s groundwater has rendered that groundwater unfit for human consumption and endangers the public health or welfare, or fish, animals, vegetation or any other part of the natural habitat in which it is found.”

Lawyers for Flint Hills say the litigation should target only Williams Alaska Petroleum, claiming the contamination occurred under that company, and that Flint Hills has prevented additional leakage of sulfolane.

“As part of our effort to ensure everyone had access to clean water, we drilled new wells for the city and extended the city’s water system to homes that previously didn’t have service,” Flint Hills spokesman Jeff Cook told Newsminer.com. “We did this at a cost of millions of dollars and then donated the wells and water system to the city, free of any charge.”

The city wants both companies to pay for the cleanup of the contamination. It also is seeking an unspecified amount for damages, “including damage to water wells, loss of income and loss of means to produce income,” according to Rod Boyce at Newsminer.com.

Even the state of Alaska, normally sympathetic to oil interests, has taken notice of the problem. A 2013 report called the problem “unprecedented…due to the distance that sulfolane has traveled in groundwater, and the number of properties affected with private drinking water wells,” according to ClimateProgress.

The state says the effects of sulfolane are unknown, but it hopes to have a better idea of its toxicity in four or five years. Maybe North Pole residents can drink egg nog until then.