" ... in 2003, Aviv signed an intelligence contract with the NXIVM Corporation. ... former members of NXIVM have come forward to claim that the company is in fact a predatory personal-growth cult that subjects its members to intensive brainwashing ... " 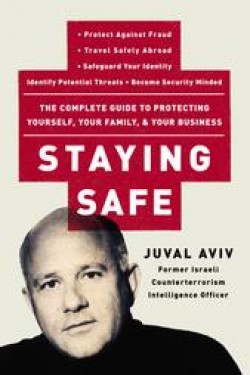 Meet "Juval Aviv, an 'international security expert' and post-9/11 media celebrity who has parlayed his mysterious past into countless appearances on local and national television. Most famously, Aviv has promoted the idea that he was the lead Mossad assassin tasked with avenging the 1972 massacre of Israeli Olympic athletes in a secret operation that was portrayed in Steven Spielberg's 2005 film Munich."

"But throughout Aviv's rise as one of New York's biggest corporate spies and as a terrorism expert on television," The Village Voice's Chris Thompson writes in a dynamite, old-school expose, "there have been nagging questions about his legitimacy. Is this guy really who he says he is?

Officially, the Israeli government says that Aviv is full of it. According to a 1990 letter from Yigal Carmon, then the Israeli prime minister's counterterrorism adviser... the closest that Aviv ever came to intelligence work was as a security official for an El Al office in New York."

Nonetheless, Aviv has built a remarkable career for himself. In 1989, following the Pan Am 103 bombing that killed 270 people in Lockerbie, Scotland, airline officials hired Aviv to investigate the incident. His report—alleging that the bombing was a CIA gun- and drug-smuggling operation gone terribly wrong—was leaked to the press, reportedly by Aviv himself. News outlets like Time, NBC, ABC, and Barron's picked up the story. But as more skeptical journalists began to examine Aviv's report, Pan Am officials suddenly dropped their plans to use it as a defense, and the media outlets that had run Aviv's allegations squirmed under the scrutiny. A Brooklyn federal magistrate later found Aviv's report to be utterly without merit....

"This guy's full of shit," says Larry Johnson, who served in the CIA and as a deputy director in the State Department's Office of Counterterrorism. "What's true is, yes, he has a security and corporate-intelligence firm, and he's big at playing up the Israeli mystique. If you say it with a foreign accent, you're good to go."

Aviv, these senior counterterrorism officials insist, is no terrorism expert; instead, he's a liar who's been spreading falsehoods about his résumé and his prowess as an investigator. But even Aviv's most virulent critics express astonishment at what he's been accused of doing lately.

Court documents allege that in 2003, Aviv signed an intelligence contract with the NXIVM Corporation, an Albany-based company that offers seminars in achieving personal and business goals, and whose devotees include heirs to some of the richest fortunes in America and Mexico. In the last few years, former members of NXIVM have come forward to claim that the company is in fact a predatory personal-growth cult that subjects its members to intensive brainwashing and requires them to swear their lives to its leader, an accused pyramid-scheme operator and self-styled genius named Keith Raniere. According to court papers, NXIVM hired Aviv to dig up dirt on someone that Raniere considered an enemy: New Jersey–based cult expert Rick Ross, a controversial figure himself who is also a frequent guest on television news programs...

Juval Aviv: trusted Fox News terrorism expert, or a fraudulent tale teller willing to hire himself out to a thuggish cult leader? It's a question that is at the heart of three lawsuits in two jurisdictions, with as many twists and turns as an espionage potboiler.