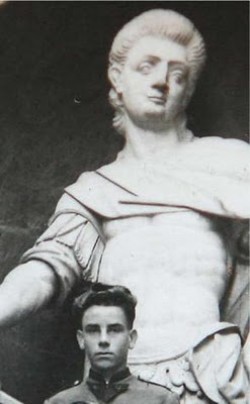 A man identified as the then 16-year-old Josef Fritzl in the park of the Hellbrunn Residence near Salzburg, Austria

Josef Fritzl: The Making of a Monster

For the past week the world has been transfixed by the appalling crimes committed in Amstetten. But now it has emerged that Josef Fritzl was the victim of brutal abuse at the hands of his mother. Could this explain the man he became?

Josef Fritzl has been depicted as one of the most evil monsters Europe has ever known. The world has reacted in horror as the full extent has been revealed of the torment to which he exposed his daughter for almost a quarter of a century, raping her and fathering her seven children. But yesterday there was a hint of different and more complex picture – one of the monster as victim, brutally abused almost daily by his own mother as he was growing up in what was then part of the Nazi-controlled Third Reich. new evidence about Fritzl’s past appeared to offer at least the beginnings of a plausible psychological explanation for his monstrous crimes of multiple rape, incest and child abuse which continued for 24 years. In an interview, the sister of Fritzl’s wife, Rosemarie, a woman identified as 56-year-old Christine R said that Fritzl had been brought up by a single mother with an explosive temper who resorted to violence to control her child. “Josef grew up without a father. His mother raised him with her fists,” Mrs R said. “She used to beat him black and blue almost every day. Something must have been broken in him because of that. He was unable to feel any kind of sympathy for other people. He humiliated my sister for most of her life.” Fritzl was born in 1935 and would have been four years old at the start of the Second World War. It was not clear whether he lost his father during the war, but, when the war ended, he would, as a nine-year-old, have experienced first hand the invasion of Austria by the Soviet Red Army in 1945. Reports in the Austrian media have claimed that as a child he “suffered badly” during this post-war occupation which was notorious for the high incidence of rape perpetrated by Russian soldiers on civilian German and Austrian women. Doctors have already provided an initial assessment of Fritzl’s personality. Reinhard Haller, an Austrian psychiatrist whose analysis of defendants is used by the courts, has suggested that Fritzl suffers from a power complex that may have resulted from his being abused by his mother. Sigrun Rossmanith, another Austrian court psychiatrist, concludes that Fritzl developed two personalities, one of which was dominated by the need to exert total control over others. His own daughter, whom he held in his cellar from the age of 18 onwards was the victim of his power complex: “She was a slave that he could use at any moment of his choosing,” she said, “He made her submissive and used her according to his needs. He exercised absolute control over her.” Fritzl’s double personality is even reflected in the design and build of his (at first sight) ordinary looking two-storey house in Amstetten’s Ybbsstrasse. The light grey facade of the building which looks out on to the main street is a normal turn-of-the-century provincial townhouse with net curtains hanging in the front windows. However the back of the house which was extended out to include Fritzl’s notorious cellar, looks not unlike the kind of massive Second World War above-ground bunkers that were built by the Nazis to withstand air raids. Passers-by are confronted with solid windowless concrete walls at ground level, the only windows at the back of the building are on the top floors, and the garden is hidden behind a row of evergreen trees. Wolf Gruber, one of Fritzl’s neighbours said last week: “Much has been made of the neighbours failing to notice anything funny going on, but the fact is that you can’t see anything that’s going on in the Fritzl house from the outside. Everything is concealed.” … Story continues