Also see: "Recovery Clinic Treating Fritzi Family has a NAZI Past", and "Josef Fritzi is a Multiple Personality, Say Psychiatrists" 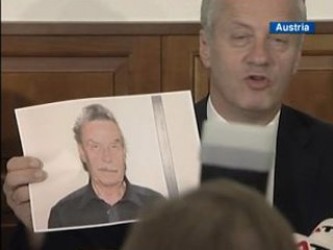 WITH his Mercedes-Benz and the rings on his fingers, Josef Fritzl looked every inch a property owner. Even when running errands, his neighbours said, he wore a natty jacket, crisp shirt and tie.

Fritzl's apartment house, its back garden obscured by a tall hedge, was his kingdom, one neighbour said, and interlopers were not welcome. On Monday, investigators combed the house and garden for clues after it was revealed that Fritzl, 73, had kept one of his daughters imprisoned for 24 years in a basement dungeon, where she bore him seven children.

The daughter, Elisabeth, 42, is in psychiatric care, along with two of her children. Her eldest daughter, Kerstin, 19 — whose illness exposed Fritzl's secret after he had her taken to a local hospital — was in a medically induced coma and is in critical condition.

The Austrian man was reported to have spent time in jail for a previous sexual assault as a young man, it has been revealed. Josef Fritzi has also been found to have been convicted for arson, seriving prison sentences in the late 1960s.

Austrian prosecutors have confirmed details of the alleged crimes — reported in The Times in London — and state that they are aware of the allegations and are now trying to trace the official records in court archives.

The case has left this town of 22,000 people, about 130 kilometres west of Vienna, in stunned disbelief. Neighbours milled around the three-storey apartment building on Monday, watching the investigation unfold and asking how such an atrocity could have occurred in their midst.

"One cannot comprehend the dimension of this," said Doris Bichler, 34, a neighbour. "Natascha Kampusch was bad, but this is of a totally different scale."

Bichler was referring to the notorious kidnapping of an Austrian schoolgirl, who was hidden in a windowless cellar for eight years until she escaped in August 2006. Until now, the Kampusch case was considered by many as the epitome of depravity in the post-World War II history of this country.

But as details of this latest case filter out, it seems even harder to fathom than Kampusch's abduction, involving nearly a quarter-century of confinement and sexual abuse, and the birth of seven children, three of whom never emerged from the cellar into daylight until last week.

It also raises a troubling question: Why did two such horrifying crimes occur in the same period in Austria, known as a tranquil, picture-book land? There seems no easy answer — and Austrian officials, while insisting that similar crimes had occurred in other countries, said they were struggling to make sense of Fritzl's singular misdeeds.

"He was a man of stature," Franz Polzer, the chief of the criminal investigations unit for the Province of Lower Austria, said at a news conference here, holding up a photograph of Fritzl, a heavy-set, grey-haired man dressed in black.

The police described Fritzl as an authoritarian figure who brooked no dissent.

Trained as an electrician and an engineer, Fritzl owned the small apartment building, renting out a few apartments and living on the top floor. Over many years, he built an underground world for his captives in a warren of cramped, windowless rooms. He provided them with food and clothing, bought outside town to avoid suspicion.

Photographs show a miniature bathroom, finished with tile and wood trim on the ceiling. A claustrophobic passageway leads to a bedroom. The chamber was accessible through a 1.2-metre-high door that opened with a remote-control device, for which only Fritzl held the code.

The police said his wife Rosemarie, 68, had no inkling of his secret life, believing that their daughter had fled the family for a cult and was unable to take care of her children.

Fritzl forced Elisabeth to give up three of the children as babies, and he and his wife raised them. A seventh child, a twin boy, died soon after being born; Fritzl told the police he threw the body in an incinerator, the authorities said.

"You have to imagine that this woman's world fell apart," a local official, Hans-Heinz Lenze, said of Rosemarie.

Officials came under sharp questioning about how the situation could have remained unknown to the authorities. After Fritzl and his wife began taking care of Elisabeth's children, social workers visited their home several times.

Officials defended themselves hotly, saying that if Fritzl was able to keep his wife ignorant of his crimes when she lived upstairs from the cellar, how could outsiders have guessed?

"You're amazed that something like this could happen in your neighbourhood," said Gunther Pramreiter, who runs a bakery next door to the Fritzls' building. He said the couple, or their adopted children, came in every other day to buy rolls.

By most accounts, the three children who grew up in the Fritzls' care were well-adjusted, each learning to play a musical instrument.

Karl Dattinger, 20, a volunteer firefighter, recalls that one of the daughters, Monika, had received a perfect score on a test of fire safety he gave at their school.

Matthias Sonnleitner, who manages a hardware store, said his children had taken martial arts classes with the Fritzl children.

Even two of the three children imprisoned in the cellar were surprisingly healthy, if pale, according to the authorities. Elisabeth had taught them to speak, and they had access to a television.

The television played a key role in untangling the case, police said.

After the 19-year-old, Kerstin, was taken to hospital, authorities appealed for her mother to come forward. Elisabeth saw the broadcast and persuaded her father to release her and her children.

Mr Fritzl confessed to imprisoning his daughter for 24 years
A lodger at the Austrian house where a father allegedly imprisoned and abused his daughter says he saw another man go to the cellar where the abuse happened.

Alfred Dubanovsky told the BBC the man was introduced as a plumber.
His claim contradicts those of investigators who say the father, Josef Fritzl, had no accomplice ...