"... It sends a chilling message to all Americans ... that John Boehner and the Republican leadership in Washington would actively seek out a candidate like this and embrace him ..." 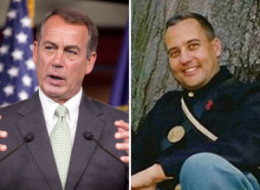 Don Seymour, a spokesman for the Freedom Project, told POLITICO Boehner would make no effort to recoup the money. Iott spokesman Matt Parker said there would be no reason for Boehner to withdraw his help.

Joshua Green at the Atlantic first reported on the conservative contender's participation in the WWII reenactments:

Iott, whose district lies in Northwest Ohio, was involved with a group that calls itself Wiking, whose members are devoted to re-enacting the exploits of an actual Nazi division, the 5th SS Panzer Division Wiking, which fought mainly on the Eastern Front during World War II. Iott's participation in the Wiking group is not mentioned on his campaign's website, and his name and photographs were removed from the Wiking website.

Iott told Green that despite his decision to take part in the reenactment, he is not an adherent of Nazism. The GOP hopeful explained, "It's purely historical interest in World War II."

A spokesman for Boehner's PAC told Politico on Wednesday that the organization doesn't intend to recover the funds it donated to Iott's campaign.

"It sends a chilling message to all Americans, especially to our veterans and to those of the Jewish faith, that John Boehner and the Republican leadership in Washington would actively seek out a candidate like this and embrace him," said Democratic Congressional Campaign Committee spokesman Ryan Rudominer.

Meanwhile, House Minority Whip Eric Cantor, who is the lone Jewish Republican serving in the House, made a point to distance himself from Iott and the political firestorm that erupted around the controversy.