The national civil rights organization Advancement Project and the Ohio Organizing Collaborative today voiced strong concerns regarding a series of bills passed in the Ohio legislature that will make it harder for eligible Ohioans to vote. The groups urged Governor John Kasich to immediately veto the bill.

“Election officials and lawmakers have an obligation to keep our voting system free, fair, and accessible to all Americans,” said Advancement Project Voter Protection Director Katherine Culliton-González. “Apparently, this is a principle not shared by some members of the Ohio legislature, whose actions place them among the ranks of states shamefully going out of their way to make it harder for certain people to vote.”

“Instead of working to create a just democracy, where all people have an equal opportunity to make their voices heard, Ohio lawmakers have passed bills that will eliminate ’Golden Week,’ the period where voters can register to vote and cast an in-person absentee ballot on the same day; and place new restrictions on mail-in absentee ballots,” said Advancement Project Staff Attorney Leigh Chapman. “To protect the franchise, Governor Kasich must immediately veto these bills.”

“The harmful elimination of Golden Week and the changes to absentee balloting will make it harder for African Americans, seniors, and Ohioans with disabilities to vote,” said Ohio Organizing Collaborative Co-Chair, Pastor Michael Harrison.

The Ohio legislature adopted in-person absentee voting in 2005 in response to Ohio’s seven-hour lines during the 2004 presidential election—the longest in the country. Since its implementation, an increasing number of Ohio voters have taken advantage of early voting each year. In 2012, 600,000Ohioans – 20 percent – voted early, and in Cuyahoga County, 41 percent of voters voted early. Many of those voters were voters of color, as Cuyahoga County is nearly 30 percent African-American and nearly five percent Latino.

In 2008, over 77 percent of people who voted early in Ohio were African-American. Early voting is embraced by all voters, but voters of color are more likely to vote early during popular programs, such as “Souls to the Polls” that encourages voters to vote on the Sunday before Election Day.

“To add insult to injury, the legislature took their changes one step further and changed the rules for absentee balloting,” Pastor Harrison added.

This change could have a large impact on low-income voters, in particular voters of color, who wish to vote absentee but cannot afford postage to return the absentee ballot by mail. “Preventing boards of elections from prepaying return postage for absentee ballots would create unnecessary additional hurdles for voters; in particular the 14.8 percent of Ohio residents who live below the poverty level – 40 percent of whom are African-American, and 42 percent whom are Latino, as compared to 15 percent of Whites,” Pastor Harrison said.

“Ohio is better than the politically manipulative actions taking place in the state legislature today,” Culliton-González continued. “If the Buckeye State wants to live up to its promise to provide all citizens with equal opportunities, then its legislatures cannot pass laws that block some eligible Americans from voting.” 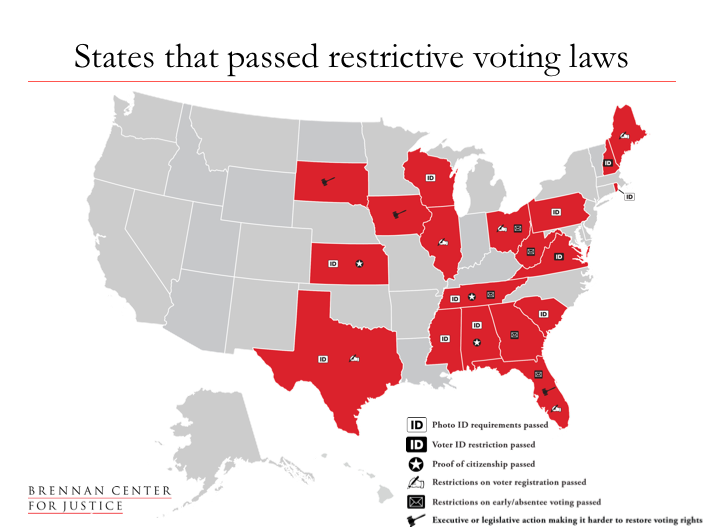