Neo-Nazi Leader Back in Ohio - The Constantine Report
0 SHARES 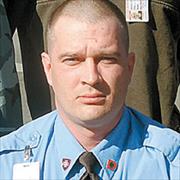 PORTLAND - A white supremacist leader who once set his sights on Grant County says he's settling in his former home state of Ohio, instead.

Paul Mullet, the self-avowed Aryan Nations leader who stirred up the John Day community last winter, told a Portland television station that a death in the family caused the group to temporarily move to Chillicothe, Ohio. He said they're still looking for a permanent home.

Mullet has roots in the Midwest. He moved from Ohio to Northern Idaho in 2009, claiming he would buy land there to establish an Aryan Nations headquarters.

In February, Mullet shifted his sights to Grant County. Visiting acquaintances here, he announced plans to create a white homeland and training center in John Day. That news prompted demonstrations by local people on the main street of John Day. Two community meetings organized by the Blue Mountain Eagle drew more than 600 people to learn about the neo-Nazi movement in America and ways communities can respond.

A Blue Mountain Eagle article in March noted that Mullet's history in the Midwest included prison stays in both Minnesota and Ohio. Convicted in a felony theft case, he served time in the Ohio state prison system from December 1993 to July 1995.

Mullet told Fox12 News that he and his group have been discriminated against by the Eastern Oregon city. He said they have not ruled out John Day or Grant County completely, but they're having trouble finding a lawyer who will handle their discrimination case.