Why is This GOP House Candidate Dressed as a Nazi? - The Constantine Report
0 SHARES

Nazism » Why is This GOP House Candidate Dressed as a Nazi?

(Thanks to Ralph Hernandez for the lead) 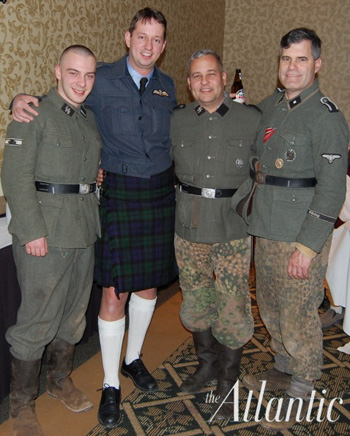 An election year already notable for its menagerie of extreme and unusual candidates can add another one: Rich Iott, the Republican nominee for Congress from Ohio's 9th District, and a Tea Party favorite, who for years donned a German Waffen SS uniform and participated in Nazi re-enactments.

Iott, whose district lies in Northwest Ohio, was involved with a group that calls itself Wiking, whose members are devoted to re-enacting the exploits of an actual Nazi division, the 5th SS Panzer Division Wiking, which fought mainly on the Eastern Front during World War II. Iott's participation in the Wiking group is not mentioned on his campaign's website, and his name and photographs were removed from the Wiking website.

When contacted by The Atlantic, Iott confirmed his involvement with the group over a number of years, but said his interest in Nazi Germany was historical and he does not subscribe to the tenets of Nazism. "No, absolutely not," he said. "In fact, there's a disclaimer on the [Wiking] website. And you'll find that on almost any reenactment website. It's purely historical interest in World War II."

Iott, a member of the Ohio Military Reserve, added, "I've always been fascinated by the fact that here was a relatively small country that from a strictly military point of view accomplished incredible things. I mean, they took over most of Europe and Russia, and it really took the combined effort of the free world to defeat them. From a purely historical military point of view, that's incredible."

Iott says the group chose the Wiking division in part because it fought on the Eastern Front, mainly against the Russian Army, and not U.S. or British soldiers. The group's website includes a lengthy history of the Wiking unit, a recruitment video, and footage of goose-stepping German soldiers marching in the Warsaw victory parade after Poland fell in 1939. The website makes scant mention of the atrocities committed by the Waffen SS, and includes only a glancing reference to the "twisted" nature of Nazism. Instead, it emphasizes how the Wiking unit fought Bolshevist Communism:

Nazi Germany had no problem in recruiting the multitudes of volunteers willing to lay down their lives to ensure a "New and Free Europe", free of the threat of Communism. National Socialism was seen by many in Holland, Denmark, Norway, Finland, and other eastern European and Balkan countries as the protector of personal freedom and their very way of life, despite the true underlying totalitarian (and quite twisted, in most cases) nature of the movement. Regardless, thousands upon thousands of valiant men died defending their respective countries in the name of a better tomorrow. We salute these idealists; no matter how unsavory the Nazi government was, the front-line soldiers of the Waffen-SS (in particular the foreign volunteers) gave their lives for their loved ones and a basic desire to be free.

Historians of Nazi Germany vehemently dispute this characterization. "These guys don't know their history," said Charles W. Sydnor, Jr., a retired history professor and author of "Soldiers of Destruction: The SS Death's Head Division, 1933-45," which chronicles an SS division. "They have a sanitized, romanticized view of what occurred." Sydnor added that re-enactments like the Wiking group's are illegal in Germany and Austria. "If you were to put on an SS uniform in Germany today, you'd be arrested."

The guy’s a Nazi through and through, as are the group’s participants. Every one of them.