" ... The [summer] exhibition at the National Gallery of Canada, The 1930s: The Making of 'The New Man,' continues in this tradition. It grapples fearlessly with a gargantuan theme - the rise of fascism in Europe ... " 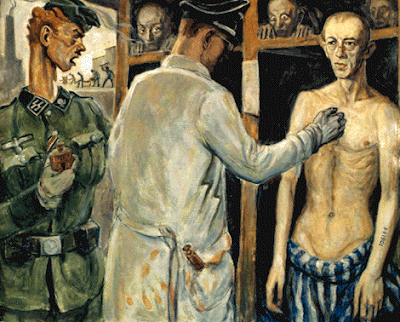 A new National Gallery show explores the scientific seedbed in which many Nazi notions took root.

OTTAWA -- The term "blockbuster" tends to give off a bad smell in critical circles, conjuring up visions of Monet water-lily umbrellas, coffee mugs à la Degas and crowds, crowds, crowds. In Canada, two men have been largely responsible for lifting us above this commercialized morass: Jean Clair, the Paris-based writer, curator and former director of the Musée National Picasso, and his Canadian colleague Pierre Théberge, now in his final year at the helm at Ottawa's National Gallery of Canada.

Their association goes back to 1967, when Jean Clair was in his salad days, serving briefly as a curator at the NGC. (His legal name is Gérard Régnier; he had created his nom de plume in 1961 for the publication of his first novel, as a genuflection to French filmmaker René Clair.) Théberge was also working at the gallery as a fledgling curator at the time, and the two shared a creative flair for showmanship unusual in the museum world.

As their careers ascended, so did the scale of their ambitions. When Théberge moved to the directorship of the Montreal Museum of Fine Arts in 1986, Jean Clair helped to orchestrate a number of its most memorable and meaty shows, among them The Twenties: Age of the Metropolis, and Lost Paradise: Symbolist Europe. After Théberge's move to the NGC in 1998, the collaboration continued, with Jean Clair producing the 2004 exhibition The Great Parade: Portrait of the Artist as Clown.

The current exhibition at the National Gallery of Canada, The 1930s: The Making of "The New Man," continues in this tradition. It grapples fearlessly with a gargantuan theme - the rise of fascism in Europe - with an eclectic reach and an amiable air of non-conformity. Like Jean Clair's earlier shows, it feels pulled from the oven before it's been fully baked - some of the themes are not clearly developed enough - but it leaves you with lots to think about and a sheaf of new images floating in your head. As an experiment in popular education, it must be counted a success.

There have been many exhibitions about the thirties, a period much mined by historians and art historians alike. This show, however, takes a somewhat novel approach, underscoring the rise of science - in particular biology and the study of regeneration and genetics - as the ideological seedbed in which dangerous notions of human perfectibility and genetic hygiene took root. The idea of man having the capacity to fashion his own future, to modify, control and improve the self in accord with a heroic vision of newly industrialized society, held enormous allure. Western culture from Leningrad to Los Angeles was besotted with notions of modernity, progress and human mastery. Who knew where it would lead?

The exhibition opens with a display of biomorphic abstract sculptures. Max Ernst's Mysterious Egg, a sculpted granite form bedded down in sand, greets you at the entrance, where it keeps company with related works by Hans Arp, Naum Gabo and others, objects inspired by the photographs of cellular life that had suddenly become widely available to the mass public.

The show includes a suite of such photographs by German Carl Struwe, and a film on cell division in Stickleback fish eggs by Jean Painlevé, a French filmmaker with an underground following among artists of the period. Wassily Kandinsky found these images a great inspiration, and the show includes several canvases demonstrating his indebtedness to these scientific sources.

But here's the show's vulnerability: Those paintings exemplify the theme, but they are not great Kandinskys. Thematic concerns are permitted to trump aesthetic accomplishment at several critical junctures in this show, and at times the dreck quotient gets close to overflowing. Ultimately, though, the composite of the good, the bad and the ugly allows you to develop a sense of the period unfiltered by art history's calcified hierarchies. It's a tricky balance, but Jean Clair pulls it off.

The show progresses through its argument, with a room devoted to surrealism - visceral and disturbing bronzes by French-American sculptor Gaston Lachaise (his Female Acrobat: a multibreasted organism with erupting labial cleavage); photo-collages of cut-up dolls by Hans Bellmer; André Kertesz's hallucinatory distortions; Alberto Giacometti's convulsive sculpture Woman with Her Throat Cut; and Picasso's figurative hybrids of man, beast and machine - all of them works that violently rebel against minimalist utopian purity.

Turning from this salon of unreason, though, you meet the stern gaze of Mussolini - a chillingly sleek bronze bust by Adolfo Wildt that stands at the entrance to a gallery filled with representations of the era's dictators. Here, again, one discovers a mixed bag: scorchingly satirical anti-Nazi collages from 1935 by German John Heartfield share the stage with Gerardo Dottori's Il Duce, a hackneyed, quasi-Cubist portrait embellished with bombs and fighter planes. Shifting gears, the viewer must navigate a terrain of aesthetic high and low, of political left and right, but the different kinds of artistic works brought together deliver a three-dimensional view. If it's social history you're after, kitsch can sometimes be as revealing as a work of genius.

Throughout, Jean Clair has chosen his themes judiciously. The show takes us through the collective fascination with the health and purity of the body (expressed by the fetishization of athleticism, and the dark art of eugenics), revealed with particular clarity in the photographs of Alexander Rodchenko. Here, the human body takes on a kind of machine-tooled perfection. One gallery is devoted to the motif of Mother Earth (in fascist iconography, the Earth is invariably mother, the leader is the father, and the citizens are the children); another, to the embrace of classical motifs by dictators who sought to honour themselves by association.

The most striking passages, from an aesthetic standpoint, are the galleries devoted to the humanist portrait, a strength in 1930s art that arose in response to totalitarianism. (Among the high points are the hyperrealist paintings by Christian Schad and Stanley Spencer; and an exquisite self-portrait by Otto Dix); and August Sanders's eloquent photographic series, People of the 20th Century, a portrait of German citizens - from bricklayers to artists to university professors to financiers - installed here within earshot of Leni Riefenstahl's Triumph of the Will. Subsequent galleries bring together photos and paintings of crowd scenes, and representations of the apocalyptic pan-European conflict that brought the modernist obsession with human perfectibility to a head.

This section, near the show's conclusion, includes some of the exhibition's most spectacular loans, such as Salvador Dali's famous 1936 painting Soft Construction with Boiled Beans (Premonition of Civil War), in which an enormous human figure (reminiscent of Goya's giants) seems to divide like a cell, one part of his anatomy holding the other in a fierce grip of terror. A small figure who looks like Lenin picks his way through the rubble of this shattered landscape.

In the show's final room, Jean Clair creates a mood of reverence and stillness, assembling a display of drawings made in concentration camps by Canadian war artists Alex Colville and Aba Bayefsky, Gershon Iskowitz (a Polish émigré to Canada who was a prisoner at both Auschwitz and Buchenwald), and Zoran Music (a survivor of Dachau). The exhibition, which began with the motif of the egg and the idea of regeneration, ends up here, in a pile of bones - the remnants of lives annihilated by ideas that haunt us still.