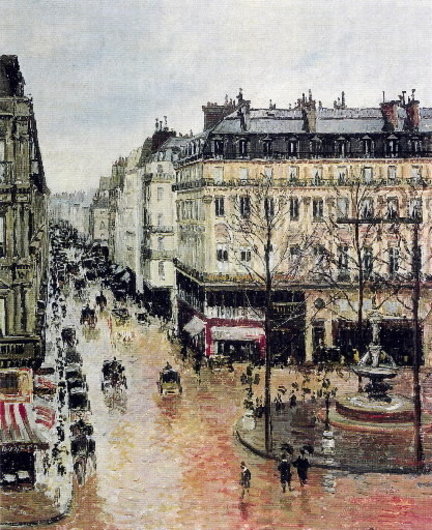 LA MESA, Calif. -- After a lunch of chopped egg and crackers, Claude Cassirer plants his walker on the worn floorboards of his tiny living room, rhythmically inching his way down the hall to his study. It is a short constitutional he takes each day to regard a gilt-framed memento of a lost life of privilege.

The frame holds a copy of an Impressionist masterpiece, "Rue Saint-Honore, Apres Midi, Effet de Pluie," by Camille Pissarro, which takes him back to his grandmother's lavishly furnished Berlin parlor in the 1920s. It was at the foot of the original painting depicting horse-drawn carriages on a rain-dappled Right Bank thoroughfare that Cassirer played as a child, running his wooden trucks and trains over a plush Oriental carpet.

"She was like a mother to me," Cassirer, who will be 89 next month, recalls of his grandmother, Lilly, who raised him when his mother died shortly after his birth.

Adolf Hitler's rise to power in 1933 scattered his Jewish family of industrialists and art collectors around the world. In the early days of the Third Reich, Cassirer's father, Fritz, moved him to Prague, where the father founded a newspaper for others who had fled the threat of Nazi persecution. It would fail in the increasingly anti-Semitic climate of Central Europe as war approached, forcing the elder Cassirer to send his teenage son to boarding school in Britain.

"I was a big shot at school because I could translate Hitler's speeches from the radio. Everyone wanted to know what he was saying," Cassirer says of his schoolmates and masters, all of them aghast at the Nazi dictator's fanatical oration.

After an ill-timed move to France in 1940, just ahead of the Nazi occupation, the young Cassirer managed to escape a year later, making his way via Casablanca in Morocco to an impoverished immigrant's life in Cleveland.

His grandmother, who had moved to Munich and married a prominent physician after her only grandchild left, was among the last of the family to flee the looming horrors of the Holocaust. She was forced to surrender the Pissarro to a Nazi official in 1939 in exchange for an exit visa, avoiding the fate that would later befall her sister in the death camp of Theresienstadt.

"My grandmother never knew what happened to the painting," Cassirer says of the 1897 Pissarro his great-grandfather, Julius, had purchased directly from the Caribbean-born Jewish artist.

Cassirer arrived in Cleveland penniless in the summer of 1941, working first as a stock boy for a department store owned by a distant cousin, then as a photographer's assistant before taking up the camera himself and opening his own studio.

His 1944 marriage to Beverly Bellin, the daughter of Russian Jewish emigres, gave him entre to Cleveland's Jewish community, and he soon commanded the photography market for weddings, bar mitzvahs and family portraits.

As he arranged fidgety children for their pictures, he would reminisce with their mothers about his early life in prewar Berlin, the tense years evading the Nazis and the mystery of the missing Pissarro.

His grandmother, whom he called Mumsie, came to live with him and his wife in Cleveland after her second husband died in 1957. When she died five years later, she left all she had to Cassirer -- the antique armoires she'd been allowed to take with her when she fled, the porcelain dishes handed down through generations and the rights to the purloined Pissarro, should it ever surface.

Cassirer says neither he nor his grandmother ever lost faith that the painting would one day be found. Through the years, the stories of former owners recovering looted treasures that had been located in museums and private collections filled him with hope.

In 2000, long after Cassirer and his wife had raised their two children, retired and moved to their ranch house in a San Diego suburb, an old customer who had talked with him years before about the painting called from New York. She said she had found it.

"I was in shock," Cassirer says of the news.

A catalog of Pissarro's works noted it had been acquired by Baron Hans-Heinrich Thyssen-Bornemisza, a Swiss art collector and scion of Germany's Thyssen steel-making empire. The Pissarro had been leased to the Spanish government along with the rest of the baron's collection, the whole of which Spain bought in 1993 for $327 million.

"Rue Saint-Honore" has been displayed in a government-run museum near the famed Prado since then and reproduced for sales and promotions.

With only meager savings at their disposal, the Cassirers turned to the World Jewish Congress for help in approaching the government of Spain, a signatory to agreements to restore Nazi-looted artworks to their rightful owners.

"They have been most unfriendly, not cooperative in any way," Cassirer says of the Spaniards.

After fruitless efforts to persuade Madrid that he was the rightful owner, Cassirer filed suit in U.S. District Court in Los Angeles in 2005 against the Kingdom of Spain and the Thyssen-Bornemisza Collection Foundation. Although Spain signed accords promising restitution to victims of Nazi art expropriations, the country and foundation have fought Cassirer on jurisdictional grounds, claiming the Foreign Sovereign Immunities Act protects them from U.S. court proceedings.

One issue delaying trial is whether Cassirer first needs to petition Spanish courts to resolve the ownership dispute before U.S. federal courts can consider his claim. For nearly five years, lawyers and judges have debated that question, and also if Spain could be made to compensate for the wrongdoing of another country -- Nazi Germany.

The painting's provenance after Cassirer's grandmother left Germany was as tortuous as the Continent's history. Jakob Scheidwimmer, the Nazi-appointed Munich art dealer who forced her to "sell" it, traded the painting to another dealer who was persecuted by the Nazis and fled with it to Holland. After Germany invaded Holland, the Gestapo seized the painting and returned it to Germany, where it was sold at auction to an anonymous buyer in 1943, according to court documents.

After the war, the German government voided the dubious 1939 sale and declared Lilly Cassirer Neubauer the rightful owner should the painting ever be found. The Bonn government in the late 1950s paid her token restitution of about $13,000, which she had to share with others thought to have acquired it legally after it was taken from her. The painting is now valued at $20 million.

Should the case go to trial, Spain is likely to argue that Cassirer's grandmother has already been compensated, but many legal experts believe the reparations paid by postwar Germany shouldn't affect the family's claim. That issue of jurisdiction is now before a full 11-judge panel of the 9th Circuit Court of Appeals, but a decision is probably still months away. The painting surfaced at a New York gallery in 1952 and was sold to a private collector in St. Louis, then to an unknown dealer in 1976 and soon thereafter to Thyssen-Bornemisza, one of the world's foremost collectors.

Spain paid the baron $50 million in 1988 to lease his collection for a decade, and half way through bought it outright. The baron had designated Spain for his prized collection, valued at more than $2 billion, an apparently sentimental gesture honoring the last of his five wives, a former Spanish beauty queen. Thyssen-Bornemisza died in 2002.

Citing the statute granting foreign states immunity from U.S. lawsuits except under a few defined conditions, Stauber said "we do not think that the case properly belongs in the U.S. courts."

A federal district court and a three-judge panel of the U.S. 9th Circuit Court of Appeals disagreed, both citing the undisputed dispossession of Lilly Cassirer Neubauer as justifying an exception to the immunity statute.

The courts also found Spain and the foundation engaged in commercial activity in the United States in promoting the museum that houses the painting, further grounds for allowing Cassirer's lawsuit to go forward.

Stauber said the foundation would have nothing more to say before the 9th Circuit rules, and a lawyer for the Kingdom of Spain didn't return calls for comment.

Cassirer's lawyer, Stuart R. Dunwoody, concedes that the legal road ahead for his client could be a long one.

Cassirer, who is hard of hearing and tires too easily even to travel to the court hearings in San Francisco, suffers no illusions about the likelihood of recovering the painting in his lifetime.

The Plot Against The Peace, by Michael Sayers and Albert E. Kahn – Excerpts