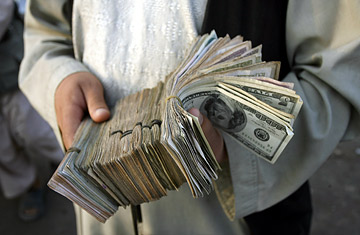 The rampant corruption coursing through President Hamid Karzai’s administration is probably the biggest impediment to success in the Afghanistan war for U.S.-led forces, but more of this corruption is coming to light as a widening probe has implicated Karzai’s closest adviser as well as members of Karzai’s family.

How bad is the corruption? It is so pervasive that a majority of Afghans would welcome the return of the Taliban’s Islamic fascism if the only other alternative is continuing to live under the illegitimate Karzai regime’s reprobate incompetence and mob-like rule.

How bad is it? It is so bad that currency counters are being installed at the Kabul airport to record serial numbers on bills to see if money is being siphoned from aid and flown out of the country – cash that is alleged to be funding the Afghan drug trade.  These are U.S. tax dollars at work.

Authorities want to eliminate a surreal arrangement that allows government officials and other well-connected figures to board planes carrying suitcases packed with cash without declaring the transfers or being searched.

A senior U.S. official said that serial numbers on U.S. currency were used to nail Afghanistan’s former minister of Islamic affairs this year, who has been accused of extorting millions from companies seeking contracts.

On Jan. 14 a U.S.-trained special task force raided the headquarters of money transfer company New Ansari Exchange and discovered that New Ansari was helping to launder profits from the illicit opium trade and moved Taliban money that had been earned through extortion and drug trafficking. The crime unit also found links between the money transfers and some of the most powerful political and business figures in the country, including relatives of Mr. Karzai.

So much money had been passing through New Ansari in so many different currencies that it effectively set Afghanistan’s exchange rates say officials from Afghanistan’s central bank. Afghan customs documents reviewed by the Wall Street Journal indicate that $3.18 billion in cash was flown out of the country between January 2007 and February 2010, with 90% of that transported by New Ansari couriers. And this only includes “declared” amounts – the “undeclared” total is anybody’s guess.

Late last week Karzai directly intervened to win the quick release of senior aide Mohammad Zia Salehi who had been arrested on corruption charges, even after the detention had been personally approved by the country’s attorney general. The latest story is that the corruption case against Salehi is wider than previously thought and Karzai wants to prevent Salehi from spilling his guts to investigators.

A commission formed by Karzai concluded that Afghan agents and U.S.-supported law enforcement units had violated Salehi’s human rights and were operating outside the constitution – charges which U.S. officials believe are politically motivated. Two American-backed Afghan task forces, one known as the Major Crimes Task Force and the other called the Sensitive Investigative Unit have caused Karzai the most problems and have come the closest in exposing the totality and enormity of the corruption in Kabul.

Karzai’s actions were so out of line that he was chastised by Secretary of State Hillary Clinton and Sen. John F. Kerry (D-Mass.) made a trip to Kabul last week to issue a warning to Karzai that he is putting U.S. funding and congressional support for the war at risk.

Afghanistan’s attorney general said that, according to wiretapped conversations – which are inadmissible in an Afghan court of law – Salehi had accepted gifts to interfere in a corruption investigation aimed at New Ansari.

Hamid Karzai’s brother, Ahmed Wali, has been implicated before for causing persons to “disappear”, if you will. This is interesting because now Afghan corruption investigators say they fear for the safety of their families and do not believe it is possible to convict those close to the president.

And these corruption investigators might have a point. Mr. Karzai, who finally came out and admitted that he did intervene to free his close adviser, said he would announce new instructions for the two anti-corruption units and try to bring them under the central government’s control. The units are designed to be self-contained, with their own lawyers, investigators, judges and detention centers – in an effort to insulate the group from political interference and corruption. They could be described as the Afghan version of the “Untouchables”.

Thus it appears Karzai is taking steps to consolidate power before the investigation leads to the highest office. And – just like Watergate – obstruction of justice could be one of the charges that ends up hanging Karzai.

Perhaps a Watergate-like scandal – which seems imminent –  and a purge of Karzai’s regime might actually be a blessing for the U.S., as it would remove one of their biggest obstacles to date. Then the problem becomes finding an adequate replacement.

Previous Article
Iraq: The Illegal, Genocidal, $736 Billion Bloodbath that ‘Conservative’ Murderers Couldn’t Live Without – War Criminals, Apparently Immune from Prosecution, Cash In
Next Article
How to Blackmail the CIA

How to Blackmail the CIA
Aug 29