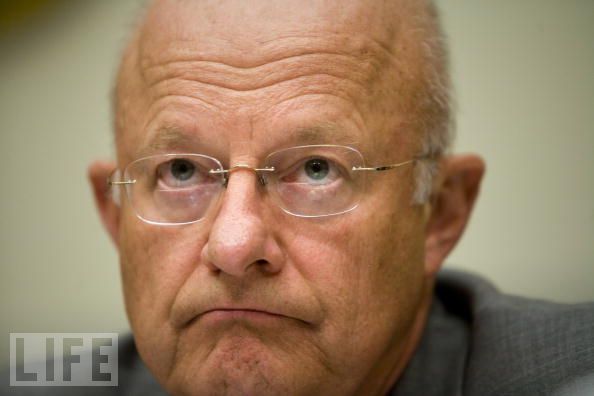 The chickens-for-checkups candidate may have lost in this week’s Nevada primary, but now the country has a potential Director of National Intelligence whose ability to garner federal money for private contractors once caused him to be compared to Kentucky Fried Chicken founder Colonel Sanders.

When retired Air Force Lieut. General James R. Clapper was between federal jobs in 2006, he was appointed to the board of directors of a company that had received a $500 million contract from the agency he’d previously headed. The vice president of the firm boasted at the time to journalist Tim Shorrock, “It’s like hiring Colonel Sanders if you’re selling fried chicken.”

Clapper’s nomination to serve as the Obama administration’s next DNI has focused the spotlight on a man who is praised by his supporters for his many years of intelligence experience but who is equally well known for being part of a “revolving door” system in which he has shuttled between government service and working for private intelligence contractors who depend on government contracts.

Clapper has for many years been a solid although relatively undistinguished member of the old boys’ network of intelligence professionals. Since 2007, he has held the post of Undersecretary of Defense for Intelligence, a position to which he was appointed as part of a shake-up which followed Donald Rumsfeld’s departure as Defense Secretary on December 18, 2006 after the Democrats had taken back control of Congress.

But Clapper has also spent many years deeply embedded in a system where former top military officers alternate between federal jobs, in which they are responsible for handing out lucrative contracts to private contractors, and lobbying on behalf of the same private contractors to obtain those federal contracts.

According to Tim Shorrock’s Spies for Hire: The Secret World of Intelligence Outsourcing, the 2007 shakeup that brought Clapper back into the Pentagon put an end to “the corrosive rivalry between the Pentagon and the CIA” but “for the contractors, however, nothing changed.”

“Gates and Clapper continued to fund the expensive programs in netcentric warfare and information technology started by their predecessors,” Shorrock explains. “One sign of the continuity was the Pentagon’s record spending on secret research and development.”

Prior to his retirement from the Air Force in 1995, Clapper had been in the military for over 32 years, concluding his career with four years as director of the Defense Intelligence Agency (DIA). He then spent the next six years holding executive positions in three successive companies where, according to SourceWatch, “his focus was on the intelligence community as a client.”

In August 2001, Clapper was appointed as director of the National Imagery and Mapping Agency, later renamed the National Geospatial-Intelligence Agency (NGA). It was while holding that position that he made the claim — for which he is now being mocked — that satellite imagery had “led him to believe that illicit weapons material ‘unquestionably’ had been moved out of Iraq.”

Clapper clashed with Rumsfeld, however, by telling him the NGA could function just as well under the Director of National Intelligence as under the Pentagon, and according to Shorrock that was why he was let go in June 2006. Clapper then spent several months working for yet another military contractor, DeticaDFI, before being appointed Undersecretary of Defense for Intelligence in April 2007, following Rumsfeld’s resignation.

The potential for conflicts of interest resulting from this alternation between public and private service has earned Clapper the attention of the National Corruption Index (NCI), which describes itself as dedicated to revealing the “substructure of ingrained conflicts of interest, subtly understood quid pro quos and malfeasance/dereliction at the nation’s most vital command posts.”

Clapper’s profile at the NCI website notes that just five months after he left DeticaDFI in 2007, “DeticaDFI was one of 11 contractors chosen by Clapper’s office to share in a five-year contract worth $250 million.”

In addition, according to NCI, as head of the NGA, “Clapper oversaw a program giving a single private contractor $500 million to design, build and launch a next-generation spy satellite. In 2006, he joined the winning company’s board of directors.”

According to Shorrock, that firm was GeoEye, the company whose vice president, Mark E. Brender, said of his decision to bring Clapper on board, “It’s like hiring Colonel Sanders if you’re selling fried chicken.”

The three firms in Virginia that Clapper had worked for between 1995 and 2001 also enjoyed profitable dealings with the federal government during his tenure. In the late 90s, the end of the Cold War was prompting defense contractors to move their corporate headquarters to the Washington, DC suburbs and engage in active lobbying efforts, and all three of Clapper’s employers appear to have been particularly successful at that game.

The first, the Vredenburg IT group, became the beneficiary of an executive order signed by President Bill Clinton in 1995 to accelerate the declassification of National Security Agency documents.

The second, Booz Allen Hamilton, has employed so many former intelligence officers that it is sometimes described as “the shadow intelligence community.” Admiral Mike McConnell, who headed the National Security Agency while Clapper was running the DIA in the early 90s, joined Booz Allen at about the same time as Clapper did, in 1996. Booz Allen won its first multi-million dollar contract on the Total Information Awareness project the following year.

Clapper’s longest stint was with the firm of SRA International, which he joined in 1998. In 1999, SRA was awarded an estimated $22 million task order by the General Service Administration “to provide systems integration services to the Army’s Force Management Support Agency.”

At the same time that he was with SRA, Clapper became president of the Security Affairs Support Association (SASA), the trade group for intelligence contractors, which has since renamed itself the Intelligence and National Security Alliance (INSA). “Reading through the lists of speakers at past SASA events is a voyage through the revolving door,” Shorrock notes.

In 2006, in addition to his positions with DeticaDFI and on the board of GeoEye, Clapper held a professorship in the practice of intelligence at Georgetown University, funded by INSA.

When Clapper returned to the Pentagon in 2007, however, he was praised as a consummate intelligence professional. National Journal correspondent Shane Harris, for example, described the shake-up which had begun with Rumsfeld’s resignation as “the return of the grown-up.” Harris saw the turnover as something approaching a coup d’etat by the professional spymasters against Rumsfeld and the Neocons, under whose leadership the Pentagon had waged an ongoing war against the CIA.

“After two years of turnover and uncertainty in the top ranks of the U.S. intelligence establishment,” Harris wrote, “which saw such outsiders as a former congressman and a career ambassador elevated to high posts, four of their own are now in control or soon will be.”

The four high-level intelligence professionals to whom Harris referred were former CIA Director Robert Gates as Secretary of Defense, former National Security Agency director Mike McConnell as Director of National Intelligence, another former NSA director, Michael Hayden, as head of the CIA, and James Clapper, who became both an undersecretary in the Defense Department and McConnell’s chief adviser on military intelligence.

Harris described all four men as “professionally close” to one another and noted that “while McConnell was leading the NSA in the early 1990s, Clapper was director of the Defense Intelligence Agency, and Gates was head of the CIA. … Also, when McConnell was the military official in charge of intelligence for Operation Desert Storm, Clapper was the assistant chief of staff for Air Force intelligence and played a leading role in coordinating the air war.”

Michael Hayden and Mike McConnell both left the government after the election of Barack Obama, with McConnell returning to his former job at Booz Allen Hamilton. It was the new administration’s decision, however, that in order to provide continuity, “Defense Secretary Robert Gates will be staying on in the top Pentagon job, for at least the first year of the Obama administration.”

A year and a half later, however, Gates shows no signs of leaving, while Clapper — described by Shorrock as Gates’ partner in bestowing “record spending on secret research and development” upon private contractors — is in line for a far more prominent and powerful position as DNI.