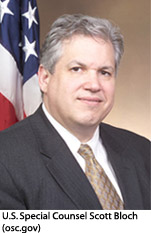 ASHINGTON - Former Special Counsel Scott Bloch pleaded guilty today in Washington to one misdemeanor charge of contempt of Congress for withholding information from a House oversight committee that was investigating his decision in 2006 to delete files from four government computers.

Bloch resigned from his post in late 2008 following an FBI raid earlier that year at his office in Northwest Washington and at his house in Virginia. Prosecutors said Bloch withheld information about a private company's removal of files from four government computers—two belonged to Bloch and the two others belonged to political aides—during an interview in March 2008 with staff from the House Committee on Oversight and Government Reform.

Bloch pleaded guilty today in front of Magistrate Judge Deborah Robinson of the U.S. District Court for the District of Columbia. ...

FROM THE US ATTORNEY'S PRESS RELEASE

" ... According to the Statement of Offense, on March 4, 2008, Bloch submitted to a transcribed interview with staff members of the United States House of Representatives Committee on Oversight and Government Reform ('House Oversight Committee'), which was investigating, among other things, whether and why Bloch: (i) directed the deletion of emails or files on any of Bloch's OSC-issued computers in December of 2006 by using the computer repair service Geeks On Call; (ii) directed that Geeks On Call delete emails or files contained on the computers of two of his OSC aides; and (iii) directed that any such deletion of computer files be done by use of a "seven-level wipe" process. This duly empowered Congressional inquiry came after various media reports that Bloch had directed the deletion of files on several OSC-issued computers by enlisting Geeks On Call to perform a "seven-level wipe" on them.

The Statement of Offense describes five separate exchanges during Bloch's March 4, 2008 interview with staff members of the House Oversight Committee during which Bloch unlawfully and willfully withheld pertinent information from the Committee. Bloch admitted in Court today that he refused and failed to state fully and completely the nature and extent of his instructions that Geeks On Call perform 'seven level wipes' on his OSC computers as well as the two OSC-issued computers of two non-career OSC staff members in December of 2006. ... "