"... Central America served as a kind of testing ground for the American empire following the Vietnam War, a testing ground which Reagan used to rally Christian evangelicals, paramilitaries and conservative politicians. This was rekindled by the imperial presidency of Bush. ..."

The past ten years in Latin America have witnessed a major shift to the left in both the halls of government power and society. Since the turn of the century, ten different Latin American nations elected leaders who campaigned on platforms to end destructive neoliberal economic policies, resist US imperialism, provide more opportunities and freedoms for a majority of the population through socialistic economic policies, and work for justice through investigations into human rights violations committed during dictatorships. From Honduras to Argentina, and Chile to Venezuela, to varying degrees, presidents followed through on their campaign trail promises, transforming the continent’s political landscape and challenging Washington.

At the same time, the George W. Bush administration became known for largely the opposite of these policies and values. Some of his notable stances included justifying war in the wake of the September 11, 2001 attacks, cracking down on civil liberties and pushing forward on free trade agreements and neoliberal policies around the world. The contrast between Bush and the presidents of Latin America was stark, and resulted in a flurry of newspaper articles and books seeking to explain Bush’s imperial designs, the leftist trend in Latin America and the dynamics of US-Latin American relations.

Two such timely books were written by by New York University history professor Greg Grandin. In Empire’s Workshop: Latin America, The United States, and the Rise of the New Imperialism Grandin makes connections between the work of the US empire across decades and presidencies, and in Fordlandia: The Rise and Fall of Henry Ford’s Forgotten Jungle City, he tells the epic tale of an American businessman who failed to successfully apply his version of capitalism in the Amazon. Both books would be useful for historians, students and activists as they seek to understand, write and act upon Latin American history.

"What is happening today in Latin America? To find out, read Empire's Workshop." This is what Venezuelan President Hugo Chávez had to say about Grandin's book. Indeed, Empire's Workshop book provides a road map for understanding the roots of US-Latin American relations and their enduring legacy in Washington. 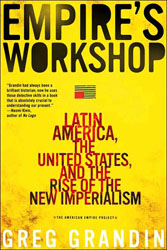 In Empire’s Workshop, Grandin explores the ways in which foreign policy toward the Middle East during the Bush administration was based on the US policies toward Central America during the Cold War, particularly during the Ronald Reagan administration. With the central thrust of the book being this connection to the Bush administration, Empire’s Workshop provides a brief history of US-Latin American relations from the end of the 1900s onward, then covering history of US interventions and meddling during the 1980s in El Salvador, Guatemala and Nicaragua, how Washington’s actions there were kept from the US public, and why these actions were commercially lucrative for US businesses.

Grandin writes that Central America served as a kind of testing ground for the American empire following the Vietnam War, a testing ground which Reagan used to rally Christian evangelicals, paramilitaries and conservative politicians. This was rekindled by the imperial presidency of Bush.

Grandin’s investigations yield a number of familiar names. Bush’s Deputy National security Advisor, Elliot Abrams, was Reagan’s Assistant Secretary of State for Inter-American Affairs. In the Iran-Contra investigations, Abrams pleaded guilty but was later pardoned by G. W. Bush. Bush’s Chief Intelligence Officer John Negroponte, was the US Ambassador to Honduras during the Contra War against the Sandinistas in Nicaragua, and was deeply involved in the Iran-Contra scandal as well. Otto Reich became Secretary of State for the Western Hemisphere in 2002 under Bush, and had founded Reagan’s Office of Public Diplomacy. John Poindexter and John Bolton were involved in the Iran-Contra during Reagan’s terms as well, and later ended up in the Bush administration.

These members of the Reagan administration got their diplomatic and foreign policy feet wet in the bloody conflicts in Central America where they “had near free rein to bring the full power of the United States against a much weaker enemy in order to exorcise the ghost of Vietnam” and made their case for US imperialism in a new era.

Some of the lessons these politicians learned in Central America that were used in the Bush administration included how to wage successful counterinsurgency wars, undermine international law and institutions, strong arm uncooperative local politicians and bureaucrats, and censure and pressure the press. Riech himself founded and ran the State Department Office of Public Diplomacy for Latin America and the Caribbean, which provided countless op-eds to the media, catered to reporters friendly to Washington’s efforts in Central America while sidelining and intimidating critical journalists and their editors. All of these tactics proved to be useful during the War in Iraq under the Bush administration where many of the same politicians returned to Washington.

Empire’s Workshop was clearly informed by current events in the US. In an interview on Democracy Now!, Grandin discussed how in the time between September 11th, 2001 and the invasion of Iraq, historians, journalists and commentators found it fitting to compare the US to other empires in world history. They looked to Rome, France, Britain, and Germany and Japan following World War II. Grandin said, “they all seemed to ignore the one place where the United States had the most extensive imperial experience, and that was in Latin America. … In Latin America was where the United States learned how to be an exceptional empire, extraterritorial—administer extraterritorial countries without actual direct colonialism.”

One profound connection between the Reagan and G. W. Bush years was the rhetoric being used to drum up support for, and justify, the Bush administration’s wars. In an interview with journalist Jeremy Bigwood, Grandin discusses this link. “It seemed to be unique for the Republican Party to justify militarism in such idealistic terms – ‘bringing democracy to the world.’ Then I realized that this wasn't actually unique for the Republicans - it was very familiar for anybody who had worked on Latin America, particularly Central America.” Grandin spoke of Reagan elevating the paramilitary Contras fighting the Sandinistas to “the moral equivalents of the U.S. founding fathers and began to justify the patronage of these killers in terms of keeping faith with America's revolutionary heritage.”

In making such connections, Empire’s Workshop helps us understand the machinations of the Bush administration, and the roots of the imperial policies that have continued into the Barack Obama presidency. This book works as both an accessible primer for those seeking to grasp the history of US-Latin American relations, and as an insightful resource for long-time observers of the region looking for a way to understand the twentieth century’s bloody ties to today’s news headlines. 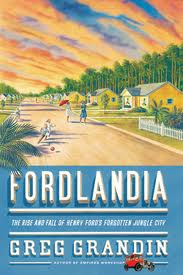 In Fordlandia: The Rise and Fall of Henry Ford’s Forgotten Jungle City, published in 2009, Grandin focuses on the fascinating and hubristic adventure Ford sets out on in the Brazilian Amazon. Ford’s interest in the region began because he needed rubber to make tires and hoses for his cars, but the industry was monopolized by European producers working in Asia. After investigating the matter, he decided to try and grow his own rubber in the Amazon. He bought up a large area of land in the Amazon in 1927 about the size of Connecticut and established Fordlandia, a town with a rubber plantation, logging operations, a movie theatre, a golf course, tennis courts, US-style homes, fire hydrants and sidewalks. Ford also outlawed drinking, as in his US factory towns, made gardening mandatory and had weekly town dances organized.

At the height of his political and financial powers, Ford attempted to replicate his version of American, small town values and assembly line techniques in the heart of a South American jungle. Grandin’s exhaustive work sheds light on the prospects of the American dream, imperial hubris and the nature of capitalism. He writes that it was Ford’s intention to use Fordlandia as “an example of his particular American dream, of how Ford-style capitalism — high wages, humane benefits and moral improvement — could bring prosperity to a benighted land.”

Ford’s Amazon experiment cost him millions, and became known as a complete failure both in its functionality as a factory town, and its ability to produce rubber: blight, the forces of nature and a lack of expertise – Ford refused to hire a rubber-growing expert – contributed to the collapse of the rubber crops.

But it wasn’t Ford’s failure to hire botanists and rubber experts that led to Fordlandia’s demise. Ford’s ultimate arrogance, writes Grandin toward the end of his book, is not that he “thought he could tame the Amazon but that he believed that the forces of capitalism, once released, could still be contained.” This belief manifested itself in number of emblematic ways.

Ford exported not just his vision, but the actual nuts and bolts of what he believed were the most effective components of an efficient workplace. Once a water tower was built in Fordlandia, his office called for a whistle to be attached to it. The whistle, which could be heard for miles around, was set according to the work day schedule. The first whistle of the morning was blasted when the jungle was often still covered in mist. By the time the second whistle sounded, “the morning sounds of the forest would give way to the noise of waking families, women grinding manioc, and the chatter, first subdued and then playful, of assembling men…. Time cards were punched, ignitions turned, instructions given, and the workday commenced.”

Many of the workers who arrived at Fordlandia weren’t accustomed to such structured work patterns – or avoided such structure in other jobs. It was no surprise then, that when workers organized a riot that was finally sparked in the cafeteria, the clocks were some of the first items destroyed. The clock, in this case, symbolized the assembly-line mentality that dehumanized the labor of workers in a repetitive fashion.

As Fordlandia offers a critique and explanation of the powers of capitalism, its publication – like that of Empire’s Workshop – was timely. It coincided, in 2009, with the US economic crisis and the collapse of various sectors of the US auto industry. By focusing on Ford and his unusual jungle experiment, Fordlandia exposes the philosophy, promise and peril behind much of American capitalism. Not only is it an impressive work of history, it is a fascinating and entertaining book that is hard to put down. With Grandin’s exceptional story-telling skills and nuanced analysis of imperialism and capitalism, Fordlandia and Empire’s Workshop untangle the some of the complicated webs that bind North and South America together.

Benjamin Dangl is the author of the new book, Dancing with Dynamite: Social Movements and States in Latin America (AK Press, 2010), and The Price of Fire: Resource Wars and Social Movements in Bolivia (AK Press, 2007). He is the editor of TowardFreedom.com, a progressive perspective on world events, and UpsideDownWorld.org, a website on activism and politics in Latin America. Email: Bendangl(at)gmail(dot)com