In a scathing report, a leading human rights group accuses the current Honduran government of “widespread” abuses committed in the wake of President Jose Manuel Zelaya’s ouster by a military coup in June. 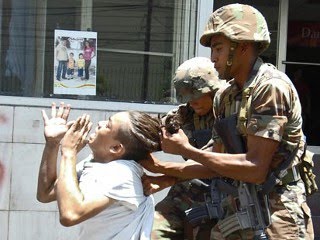 In this file photo, soldiers arrest and beat a supporter of ousted Honduran President Manuel Zelaya during a demonstration in San Pedro Sula, Honduras on July 2, 2009. Coup leaders in Honduras vowed that ousted President Manuel Zelaya will ‘never return to power’ despite mounting international pressure and an ultimatum by the Organization of American States. (STR/AFP/Getty Images)

The report, by the Inter-American Commission on Human Rights (IACHR), found instances of sexual violence, excessive use of military force, arbitrary detention and several confirmed deaths and so-called “disappearances.” The IACHR also alleged that the government has threatened, detained and beaten members of the media, creating “an atmosphere of intimidation that inhibits the free exercise of freedom of expression.”

“Given the ongoing abuses documented by the Commission and the lack of effective legal protection, it is urgent that the international community exert concerted and effective pressure to restore democratic government in Honduras,” said José Miguel Vivanco, Americas director at Human Rights Watch, which commissioned the IACHR report.

The deaths of four Hondurans, that the Commission claims resulted from the use of excessive force, are chronicled in a chilling timeline.

July 5: Isis Obed Murillo Mencías is shot in the head while participating in a protest outside Tegucigalpa’s Airport.

July 25: The tortured body of Pedro Magdiel Muñoz is found in the state of El Paraíso. According to witnesses, Muñoz was arrested by the military after participating in a rally in front of military roadblocks.

July 30: Roger Vallejos Soriano, a teacher, was shot in the head during a protest in the city of Comayagüela.

August 2: Pedro Pablo Hernández was shot in the head at a military roadblock in the agriculturally lush Jamastran valley, according to testimony collected by the Commission.

The report also details two “disappearances”, including a Honduran last seen on July 12 at a protest, and another person seized at home on July 26. They remain unaccounted for by the government, despite the Commission’s four requests for information. The alleged disappearances resemble those made infamous during the dictatorships of the 1970 and 1980s in Argentina, Chile, and Uruguay.

Calls to the Honduran Embassy in Washington, DC for a response to the IACHR findings were not returned. The Honduran diplomatic corps in the U.S. has thrown its support behind ousted president Zelaya.

The Commission’s findings have created tension between the IACHR and the Organization of American States (OAS), which has a delegation in Honduras. The OAS is attempting to persuade the current government to approve an agreement brokered by Costa Rica’s government for resolution of this crisis.