Hoffa: “Tea Party and John Birch Society are One and the Same” 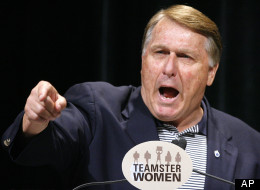 When James Hoffa, president of the International Brotherhood of  Teamsters, looks at the Tea Party today, he flashes back to 1964 and sees the John Birch Society.

“The Tea Party, these right wingers are basically the modern-day John Birch Society,” he told U.S. News. “They are being extremists.”

The John Birch Society gained traction in the earl 60s with its vehemently anti-communist rhetoric and distrust in government.

Hoffa  says just like in the early 60s when the John Birch Society pushed for  Barry Goldwater, who was the more conservative candidate, to be the  Republican presidential nominee, the Tea Party has forced its the GOP further to the right.

“It’s just like in 1964 when Goldwater ran against Johnson and the John Birch society was calling the shots.”

Hoffa  says the strong voice of the Tea Party in Congress has forced the  Republican leadership to ignore party centrists, which ultimately could put Republicans at risk among the general electorate this November.

But while Hoffa insists their ideas are  too radical for the country, the one advantage that the Republicans  have these days, Hoffa says is a financial one.

Hoffa  argues the Supreme Court’s ruling in the Citizens United case, which  allowed people to donate unlimited amounts of campaign cash in the name  of free speech, gave Republicans an edge and left the party vulnerable  to being held hostage to radical far-right interests.

“We cannot have one person underwriting an entire campaign,” Hoffa says.

Republicans have countered the argument by accusing the Teamsters of dumping millions into elections on behalf of Democrats.

According  to the Sunlight Foundation, a group that tracks election spending,  public sector unions alone have spent $139 million in the election so  far.

While the Teamsters are big donors, Hoffa says it’s an unfair comparison.