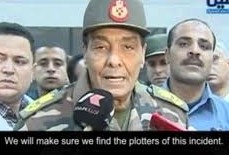 I have argued that what has just happened in Egypt is a bloodbath that is not a bloodbath, conducted by a military junta responsible for a coup that is not a coup, under the guise of an Egyptian “war on terror”. Yet this newspeak gambit – which easily could have been written at the White House – is just part of the picture.

Amid a thick fog of spin and competing agendas, a startling fact stands out. A poll only 10 days ago by the Egyptian Center for Media Studies and Public Opinion had already shown that 69% were against the July 3 military coup orchestrated by the Pinochet-esque Abdel Fattah al-Sisi.

So the bloodbath that is not a bloodbath cannot possibly be considered legitimate – unless for a privileged coterie of Mubarakists (the so-called fulool), a bunch of corrupt oligarchs and the military-controlled Egyptian “deep state”.

The Muslim Brotherhood (MB) government led by Mohamed Morsi may have been utterly incompetent – trying to rewrite the Egyptian constitution; inciting hardcore fundamentalists; and bowing in debasement in front of the International Monetary Fund. But it should not be forgotten this was coupled with permanent, all-out sabotage by the “deep state”.

It’s true that Egypt was – and remains – on the brink of total economic collapse; the bloodbath that is not a bloodbath only followed a change in the signature on the checks, from Qatar to Saudi Arabia (and the United Arab Emirates). As Spengler has demonstrated on this site (see Islam’s civil war moves to Egypt, Asia Times Online, July 8, 2013), Egypt will remain a banana republic without the bananas and dependent on foreigners to eat any. The economic disaster won’t go away – not to mention the MB’s cosmic resentment.

The winners, as it stands, are the House of Saud/Israel/Pentagon axis. How did they pull it off?

When in doubt, call Bandar

In theory, Washington had been in (relative) control of both the MB and Sisi’s Army. So on the surface this is a win-win situation. Essentially, Washington hawks are pro-Sisi’s Army, while “liberal imperialists” are pro-MB; the perfect cover, because the MB is Islamic, indigenous, populist, economically neoliberal, it wants to work with the International Monetary Fund, and has not threatened Israel.

The MB was not exactly a problem for either Washington and Tel Aviv; after all ambitious ally Qatar was there as a go-between. Qatar’s foreign policy, as everyone knows, boils down to cheerleading the MB everywhere.

So Morsi must have crossed a pretty serious red line. It could have been his call for Sunni Egyptians to join a jihad against the Bashar al-Assad government in Syria (although that’s formally in tune with Barack Obama’s “Assad must go” policy). Arguably, it was his push to install some sort of jihadi paradise from the Sinai all the way to Gaza. The Sinai, for all practical purposes, is run by Israel. So that points to a green light for the coup from both the Pentagon and Tel Aviv.

Tel Aviv is totally at ease with Sisi’s Army and the flush Saudi supporters of the military junta. The only thing that matters to Israel is that Sisi’s Army will uphold the Camp David agreements. The MB, on the other hand, might entertain other ideas in the near future.

For the House of Saud, though, this was never a win-win situation. The MB in power in Egypt was anathema. In this fateful triangle – Washington, Tel Aviv and Riyadh – what remains to be established is who was been the most cunning in the wag the dog department.

That’s where the Incredibly Disappearing Qatar act fits in. The rise and (sudden) fall of Qatar from the foreign policy limelight is strictly linked to the current leadership vacuum in the heart of the Pentagon’s self-defined “arc of instability”. Qatar was, at best, an extra in a blockbuster – considering the yo-yo drifts of the Obama administration and that Russia and China are just playing a waiting game.

Sheikh Hamad al-Thani, the emir who ended up deposing himself, clearly overreached not only in Syria but also in Iraq; he was financing not only MB outfits but also hardcore jihadis across the desert. There’s no conclusive proof because no one in either Doha or Washington is talking, but the emir was certainly “invited” to depose himself. And not by accident the Syrian “rebel” racket was entirely taken over by the House of Saud, via the spectacularly resurfaced Bandar Bush, aka Prince Bandar bin Sultan.

So the winners once again were the Saudis – as the Obama administration was calculating that both the MB and the al-Qaeda nebulae would then fade into oblivion in Syria. That remains to be seen; it’s possible that Egypt from now on may attract a lot of jihadis from Syria. Still, they would remain in MENA (Middle East-Northern Africa).

As for Sisi, he was clever enough to seize the “terror” theme and pre-emptively equate MB with al-Qaeda in Egypt, thus setting the scene for the bloodbath that is not a bloodbath. The bottom line is that a case can be made that the Obama administration has in fact subcontracted most of its Middle East policy to the House of Saud.

Only two days before the bloodbath that is not a bloodbath, Chairman of the Joint Chiefs of Staff, General Martin Dempsey was in Israel getting cozy with General Benny Gantz and Prime Minister Benjamin Netanyahu, discussing the proverbial “threats that could emanate out of the region – globally and to the homeland – and how we can continue to work together to make both of our countries more secure”. It’s unthinkable they did not discuss how they would profit from the imminent bloodbath that is not a bloodbath.

At the same time, Israeli Defense Minister Moshe Ya’alon bombastically announced a new “axis of evil”; Iran, Syria and Lebanon. That implies Tehran, Damascus and, significantly, Beirut as a whole (not only the predominantly Shi’ite southern suburbs). Ya’alon explicitly told Dempsey it was “forbidden” for them to win the civil war in Syria.

Considering that the Central Intelligence Agency itself has deemed the civil war in Syria as a “top threat” to US national security in case al-Qaeda-style outfits and copycats take over in an eventual post-Assad situation; and at the same time Washington is extremely reluctant to stop “leading from behind”, a case can be made that Israel may be entertaining another invasion of Lebanon. An always alert Sheikh Nasrallah, Hezbollah’s secretary-general, has already been talking about the possibility.

Then Dempsey went to Jordan – which already holds around 1,000 US troops, F-16s with crews, and an array of Patriot missiles. The spin is that the Pentagon is helping Amman with “border control techniques” as in one of those favorite Pentagon acronyms, ISR (“intelligence, surveillance and reconnaissance”).

That’s just spin. Most of all Dempsey went to survey the progress of the recent batch of anti-tank missiles, bought by – who else – the Saudis and supplied by the CIA, via Jordan, to (in theory) selected “good rebels” in southern Syria. Those “rebels”, by the way, were trained by US Special Forces inside Jordan. Obviously Damascus will be preparing a counterpunch to this offensive by the American/Saudi/Jordanian axis.

There’s hardly any “American credibility” left in the Middle East – apart from puppet entities like Jordan and selected elites in the feudal Gulf, that “democratic” realm of corruption, mercenaries and imported proletariats treated like cattle.

Perception is everything. Informed opinion all across the Middle East immediately identifies Ford as a creepy death squad facilitator. His CV prior to Syria – where he legitimized the “rebels” – is matchless; sidekick to sinister John Negroponte promoting the “Salvador Option” in Iraq in 2004. The “Salvador Option” is code for US-sponsored death squads, a tactic first applied in El Salvador (by Negroponte) in the 1980s (causing at least 75,000 deaths) but with deep origins in Latin America in the late 1960s throughout the 1970s.

Sisi will keep playing his game according to his own master plan – bolstering the narrative myth that the Egyptian army defends the nation and its institutions when in fact defending its immense socio-economic privileges. Forget about civilian oversight. And forget about any possible independent political party – or movement – in Egypt.

As for Washington, MB or “deep state”, even a civil war in Egypt – Arabs killing Arabs, divide and rule ad infinitum – that’s fine, as long as there is no threat to Israel.

With Israel possibly mulling another invasion of Lebanon; the Kerry “peace process” an excuse for more settlements in Palestine; Bandar Bush back practicing the dark arts; the pre-empting of any possible solution to the Iranian nuclear dossier; Egypt in civil war; Syria and also Iraq bleeding to death, what’s left is the certified proliferation of all kinds of axes, and all kinds of evil.