Photo: A supporter of the Hungarian radical right-wing party "Jobbik" attends a rally in Budapest, Oct. 23, 2009. The words read "my honor is my loyalty." (Laszlo Balogh/Reuters)

There's been a disturbing upsurge of extremism and anti-Semitism recently in the former communist country of Hungary. A political party called Jobbik, which rails against immigrants, Gypsies and Jews and whose rallies are protected by a black-clothed militia called the "New Hungarian Guard," is the third-largest in the Hungarian parliament. Verbal abuse directed at Gypsies, "foreigners" and Jewish Hungarians is commonplace, on the streets and the Internet.

A website whose domain is registered by a Healdsburg businessman, and whose server is listed in San Francisco, has quite a bit to do with it.

Jobbik and Hungarian Guard members in Budapest, 23 October 2009, anniversary of the 1956 uprising against the Soviet invasion.

The website, whose writers and editors are in Budapest, is registered in the United States by Bela Varga. Varga, 50, was well known around Healdsburg, having worked for a couple of Napa Valley wineries. He once owned a shop on Healdsburg's main drag, the Red Paprika, which sold imported foodstuffs and other Central European items.

That was until stories about his relationship to Kuruc.info began appearing in the local press last year. The Red Paprika closed, and Varga has been rarely heard from since. "He was a really nice guy," said Edie Bradley, who works at the B&B Lounge, next door to Varga's former store. "But it seemed he wasn't getting the traffic."

"Oh, the Nazi guy," said a waitress over the road at Bear Republic Brewing Co., when asked whether she knew Varga.

No one answered the door at his last known address in Healdsburg this week. Phone calls and e-mails were not responded to on Wednesday. A call to a cell-phone number I had been given was answered quickly with a "wrong number."

In September, Varga, who came to the United States from Hungary in 1988, acknowledged to the Healdsburg Patch that he had registered the Kuruc.info domain and opened a bank account for the website as a favor to friends. "I helped them out in 2008, when the government closed them down and they couldn't open a bank account," he said.

Varga said he had nothing to do with the site's content but allowed that some of its writers "leaned toward Nazism. In a healthy society," he added, "we have to tolerate differences."

Others have questioned Varga's hands-off assertion, pointing to reports that Kuruc.info offered a $340 bounty for every demonstrator outside Csatary's house courtesy of "our Comrade Bela Varga who lives in America."

Varga registered Kuruc.info with Domains by Proxy, a company that specializes in anonymous domain registration.

The server, according to IP Tracker, belongs to CloudFlare, a website performance and domain-name server company in San Francisco. Questions to the 3-year-old company about the server and whether CloudFlare is aware of Kuruc.info's content did not receive a response on Wednesday. 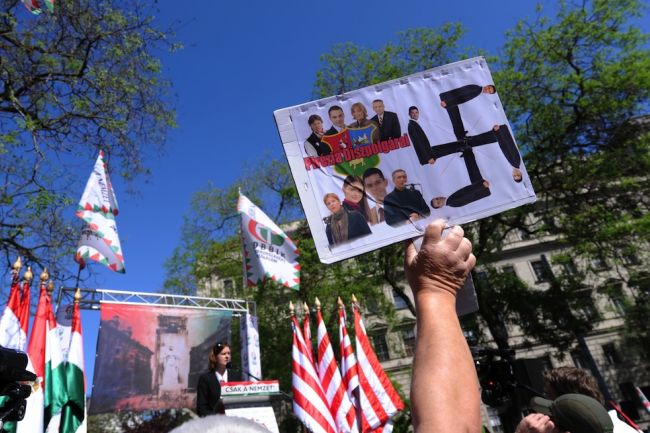 But why does a Hungarian website need to be registered and have its server located in the United States? The official answer: Hungary outlaws Holocaust denial and other forms of hate speech, which therefore cannot be transmitted from there. "To avoid the measures of the Hungarian government, (Kuruc.info) fled to the United States and has been conducting disgraceful activities from there. If this problem were to be resolved, then the Hungarian forces of anti-Semitism would be severely weakened," explained Orban in a letter to Rep.Joseph Crowley, D-N.Y., last year.

Yet, Kuruc.info's offices in Budapest appear to operate quite openly, as do other purveyors of hate and Holocaust denial, including a member of the far-right Jobbik party (with which Kuruc.info has very close ties), who recently called on the government to compile a list of Jewish members of parliament who pose a "national security risk."

"I'm so terribly angry at the Hungarian government for doing so little," said Eva Balogh, a former professor of East European history at Yale University, who writes the Hungarian Spectrum blog.

Orban's comments about Kuruc.info were part of a response to a letter from 50 U.S. lawmakers, including Rep. Barbara Lee, D-Oakland, to come out more strongly against the activities of Jobbik and the extremist policies it espouses. "This kind of despicable hate speech denigrates, intimidates and scapegoats minorities in Hungary and has no place in any society," said the letter.

Well said, but some attention closer to enablers at home might also be in order.

Although there are no equivalent hate and Holocaust-denial laws in the United States,Facebook did its part in July, quietly removing Kuruc.info's page, which had 70,000 followers, after receiving complaints from the Anti-Defamation League and other organizations. "It violated our standards on hate speech," said a Facebook spokesman.

The European Parliament's Hand-Out to the Far-Right