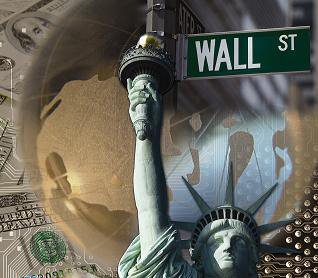 You've seen the news. You know the score. The House of Representatives has now completed the economic terrorist attack inflicted on the American people by the nation's elite.

The bailout bill -- or as Arthur Silber more rightly terms it, the "Extortion Bill" -- is already law, thanks to the Democrats in Congress, and to Barack Obama, who spent the day working the phones and twisting arms to make sure the $700 billion bonanza for the filthy rich passed without any more of the hiccups that held it up earlier this week.

The plan that Obama made his own -- despite its origins in the poison kitchen of the Bush White House -- is far worse than the version voted down on Monday. Every reputable economic expert says that the plan is unworkable; it will not solve the problems at the root of the current economic crisis, but will only make them worse. It entrenches many of the fraudulent practices that led to the meltdown in the first place, and rewards the perpetrators for their misdeeds with a gargantuan amount of public money, which they can now use to carry on largely as before, albeit with a few new toothless "oversight" mechanisms operated by their own Wall Street cronies, and their bribed-and-bought hirelings on Capitol Hill.

There were many viable, reasonable, eminently centrist alternatives to the radical, plutocratic Bush-Obama scam -- alternatives which would have been politically palatable to a broad spectrum of the electorate. One of the best ones of this ilk that I've seen was outlined in the eminently mainstream Washington Post earlier this week by two eminently respectable Yale economists. (You can find it here.) There were many other such practical and effective plans offered by reputable experts, any one of which could have gone a long way toward protecting ordinary citizens now exposed by the meltdown, supporting the banks, and stabilizing the markets -- all without effecting one of the largest single redistributions of wealth since the Bolsheviks seized power in Russia in 1917.

None of these plans were considered or debated or even mentioned, not even for a single moment, by the Democratic leadership in the House and Senate. Instead, they joined the Republican leadership and the Bush Administration in repeating, over and over, the Big Lie that there was NO OTHER CHOICE but some basic version of the unworkable Bush plan. The Democrats -- led by Barack Obama -- not only threw a political lifeline to the most despised president in American history (in the middle of an election year!), they deliberately took ownership of a measure widely rejected by the American public -- a class war weapon of mass destruction whose malign effects will reverberate through American society for years, perhaps generations to come.

Why have they done this? Why would they do such a thing? Why would they commit such an egregious offense against their own people, when they could have very easily NOT done it, and had the near-unanimous support of the American electorate in standing up to the Bush plan and choosing some other completely mainstream alternative?

You already know the answer. It's because they do not serve the American people. They serve a very small yet brutally powerful ruling class. And this elite wanted the Bush-Obama extortion plan, and no other, to make sure their power and privilege were not unduly threatened by the debacle that their own monstrous greed and fraud have made.

Let's go back to Arthur Silber on this, as we have done so often during the financial crisis. As always, he goes behind the heated headlines to see the deeper threads of connection knitting the bipartisan economic-domestic Terror War with the bipartisan foreign policy Terror War that is now wrapping the world in flames. And he traces one of the prime roots of this sinister web: the American elite's belief that whatever they do to maintain their primacy -- however many people they kill, how much destruction and suffering and degradation they cause, at home and abroad -- it is all reasonable, rational and right...because they are doing it. Here is Silber in "Terrorist State, At Home and Abroad." [And again, you should read the whole thing, with the many links that broaden and deepen the scope of the argument.].

"Militarized or otherwise, American policy remains under the influence of an unacknowledged and unjustified utopianism. This is the unanalyzed background to the work of all Washington's foreign policy agencies. It permeates the rhetoric and thinking of Republicans and Democrats alike. It is the reason Americans can think that history has an ultimate solution, and that the United States is meant to provide it."

"It has long been apparent to an honest observer that "utopianism" of this kind is immensely and unforgivably destructive, just as it is obvious that the belief that one person or one nation has the "ultimate solution" constitutes murderous arrogance of the kind we properly associate with the greatest monsters in history. One of the most deeply pathetic aspects of the tragedy of Iraq is that not a single element of this belief system has been dislodged in even the smallest degree. Thus, we continue to hear Obama, along with every other prominent national leader, proclaim: "The American moment has not passed. The American moment is here. And like generations before us, we will seize that moment, and begin the world anew."

Where it matters, on the ground, the American drive to world hegemony translates into brute force used to make others behave in the manner the U.S. government demands. Such force will often be deployed in the form of economic assistance, but offered only on certain conditions, which therefore more accurately means economic intimidation. On other occasions, the interference becomes harsher, while it is still kept under wraps to some extent: thus, we have numerous covert operations, sometimes used to engineer the overthrow of duly constituted governments. When all else fails, military force will be employed openly and with carefully crafted righteous anger."

It will also be cast as a "favor" to the victims, as Silber notes:

"...just as the genocide unleashed by the U.S. government in Iraq constituted a benevolent, disinterested gift to more than a million slaughtered Iraqis, and to many more millions made homeless refugees. "Freedom isn't free," our viciously stupid propagandists announced to the dead, maimed and displaced Iraqis, neglecting to note that it was beneath our lofty status to inquire whether the gift was desired in the smallest degree, especially when acquired by these methods and with the associated costs. (This assumes that "freedom" was, in fact, the goal, which of course it was not. All of this is propaganda, remember.)

The fundamental lesson is unmistakable, and unmistakably evil in intent and execution (a word made horribly appropriate in more than one sense by our government's actions): you will do exactly as we say -- or else."

Now comes the turn to the domestic scene:

"Just as it is not possible for an individual to restrict what constitutes a fundamental psychological methodology to only one area of his life, so a ruling class will not employ one approach in foreign policy while dealing with matters of domestic politics in a radically different manner. In any case, the U.S. ruling class never had such a desire: in one way or another, other nations would be made to submit to the demands of the U.S. government -- and the same is true for U.S. citizens. The citizens of America will do exactly as the ruling class demands -- or else. As far as the ruling class is concerned, you have as little reason to complain as the murdered Iraqis do: the ruling class only wishes to improve your life. The ruling class acts only on your behalf, and "for your own good."

You now witness these tactics of intimidation and of the most transparently, viciously manipulative fear-mongering deployed by almost every member of the ruling class in connection with the bailout bill....I have several other news articles offering comments from other members of the ruling class, and I could easily find many, many more, all to the same general effect: be terrified and do what they say. Or else. If you don't understand the urgency and necessity of doing exactly what they say, you're just stupid. In that case, you should obviously turn your life and your money over to your betters. Let them dispose of all of it as they see fit. That's why they're your rulers, isn't it? They know what's best for you.

...The system is now set up so that when the ruling class is particularly intent upon a certain objective, even your obedience isn't required any longer. After all, what are you going to do? Move to another country? Not vote for any of these bastards in November?

Most Americans won't do that. They protest now; once the deed is done, they'll go back to their lives, such as they will be at that point, and devote themselves to making the ruling class more wealthy and more powerful.

To a terrorist government, you're irrelevant, as irrelevant as a slaughtered five-year-old Iraqi girl. But they'll continue to try to scare you to death. You're easier to rule that way.

I suggest you get used to it. This is your future..."

In a later piece, written as the House was passing the bailout, Silber hammered home to the grim implications of the key role played by Barack Obama in its passage. [Again, see the original for copious links]:

"First, Obama and the Democrats fully own the extortion bill. Obama and the Democrats, as much as the Republicans, are nothing but whores for the sickeningly corrupt financial and corporate interests that control the U.S. government. I've been pointing this out about Obama for some time. Furthermore, in their determination to make certain that the ruling class's affluence and power are maintained with the work, blood and lives of "ordinary" Americans for generations to come, both Republicans and Democrats have turned their terrorist tactics on Americans with close to full force. All that is missing are the bullets -- but they may not be long in coming as conditions deteriorate. It should be illuminating (read: nauseating) to see most of those who would condemn brutal police state actions when ordered by Republicans watch identical events in total silence -- and in this context, silence means consent -- because a Democrat orders them.

Second, and see an earlier essay for much more on this subject, Obama's election will ensure the death of significant political opposition in this country for the foreseeable future as much as any single development can....

To sum up: the triumph of the ruling class, again, the destruction of the present and future for all other Americans, and the annihilation of political opposition, all within a matter of months."

But an even more apt quote, perhaps, is one we have used here many times, referring to the remark that the Emperor Tiberius once made when a groveling Roman Senate gave in once more to his authoritarian dictates: "Men fit to be slaves."