Grief And Anger At Aaron Swartz's Memorial; Prosecutor Linked To Another Hacker's Death

The information activist was “doomed to be just Aaron,” recalls a friend. But a prosecutor was “hellbent on destroying his life.”

The hundreds gathered at Cooper Union on Saturday called themselves "allies" of Aaron Swartz, the 26-year-old activist and programmer who took his own life earlier this month.

On the heels of a funeral held outside Chicago on Tuesday, where Swartz's father charged that Aaron was "killed by the government," speakers in New York once again inveighed against federal prosecutors who, they said, drove Swartz to suicide.

She recalled a court hearing in which Swartz shrugged off her embrace.  "I don't want to show Steve Heymann that," Swartz told her.

Several eulogists had known Swartz since his teenage years — a computer prodigy, he helped build RSS, Creative Commons, and reddit all before turning 20 — but the lines that drew the most applause addressed Swartz's legal demons, which had haunted him since a 2011 indictment for downloading millions of scholarly articles from a wiring closet at MIT.

"My first question was, why isn't MIT celebrating this?" said Edward Tufte, a professor emeritus at Yale. Along with Heymann and U.S. Attorney Carmen Ortiz, MIT has come under fire for participating in Swartz' prosecution, despite the university's longstanding commitment to open access.

Roy Singham, the founder of ThoughtWorks, an IT consultancy firm that employed Swartz, rallied against the "duplicity of our society that protects those that accumulate wealth, and treats those like Aaron in a completely different fashion."

While tech leaders like Mark Zuckerberg, Steve Jobs and Bill Gates "bent the rules for their own good," said Singham, "none of them faced 35 years in prison." Swartz's life, he said, was "the exact opposite of these people," dedicating his "incredible talents and privilege for the advocates of those without."

Although his legal travails loomed large over the service, Swartz was remembered by others as a rational altruist, an idealist who appreciated the mechanisms of change.

"The revolution will be A/B tested," Stinebrickner-Kauffman remembered Swartz as saying.

In a 2012 keynote address that has been shared widely since his death, and was excerpted at the service, Swartz recounts his role in the "Stop SOPA" movement, which successfully thwarted online trafficking legislation last year.

"I did what you always do when you're a little guy facing a terrible future with long odds and little hope of success," Swartz says. "I started an online petition."

An architect of the modern internet, Swartz saw more than most the practical power of connectivity, and the possibility to "change the world at scale," as his friend, Ben Wikler, said.

"Aaron believed in trying to maximize the good he accomplished," said Holden Karnofsky, co-founder of the charity evaluator GiveWell, which was the sole beneficiary of Swartz's will.

Music, too, filled the auditorium on Saturday. As mourners filed in, the protest songs of Pete Seeger — whose grandson read a statement from the famed songwriter — thrummed over the loudspeakers. Twitter's Glenn Otis Brown quoted from the Leonard Cohen song, "Anthem." And OK Go singer Damian Kulash performed an acoustic cover of Lavender Diamond's "Everybody's Heart's Breaking Now."

Having staged so many acts in his short life, Swartz could be all things to all people, said Quinn Norton, a longtime friend. Writers saw in him a scribe, sociologists a colleague, and activists a leader.

"Aaron was doomed from the very beginning to be just Aaron," Norton said.

Soon after the indictment, Tufte recalled reaching out to the founder of JSTOR, the digital library whose files Swartz had retrieved. JSTOR settled with Swartz privately in 2011, and said in athat they "regretted being drawn into [the case] from the outset."

"Aaron's unique quality was that he was marvelously and vigorously different," said Tufte. "Perhaps we can all be a little more different too."

Prosecutor Stephen Heymann has been blamed for contributing to Swartz's suicide.

Back in 2008, young hacker Jonathan James killed himself in the midst of a federal investigation led by the same prosecutor. 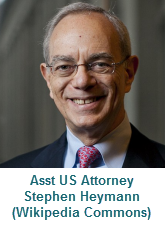 One of the prosecutors in the case of the online pioneer who killed himself this weekend, Aaron Swartz, was accused in 2008 of driving another hacker to suicide.

Some of Swartz's friends have accused Assistant United States Attorney Stephen Heymann of contributing to Swartz's suicide, with his unwillingness to compromise on the prosecution of Swartz in a case involving scholarly journal articles.

Back in 2008, another young hacker, Jonathan James, killed himself after being named a suspect in another Heymann case.

James, the first juvenile put into confinement for a federal cybercrime case, was found dead was two weeks after the Secret Service raided his house as part of its investigation of the TJX hacker case led by Heymann — the largest personal identity hack in history. He was thought to be "JJ," the unindicted co-conspirator named in the criminal complaints filed with the US District Court in Massachusetts. In his suicide note, James wrote that he was killing himself in response to the federal investigation and their attempts to tie him to a crime which he did not commit:

"I have no faith in the 'justice' system. Perhaps my actions today, and this letter, will send a stronger message to the public. Either way, I have lost control over this situation, and this is my only way to regain control." ... "Remember," he wrote, "it's not whether you win or lose, it's whether I win or lose, and sitting in jail for 20, 10, or even 5 years for a crime I didn't commit is not me winning. I die free."

Heymann received the Attorney General's Award for Distinguished Service for "directing the largest and most successful identity theft and hacking investigation and prosecution ever conducted in the United States."

Swartz's family has accused Heymann, U.S. Attorneys Scott Garland who was the lead prosecutor, and Massachusetts U.S. Attorney Carmen Ortiz of contributing to their son's death, who was known to have suffered from depression. "Aaron's death is not simply a personal tragedy. It is the product of a criminal justice system rife with intimidation and prosecutorial overreach. Decisions made by officials in the Massachusetts U.S. attorney's office and at M.I.T. contributed to his death."

While Ortiz ultimately holds the responsibility for the department, Heymann was the lawyer handling the negotiations with Swartz and his attorneys.

A petition has been put up online demanding that Heymann be fired because of his "overzealous prosecution of an allegedly minor and non-violent electronic crime led to the suicide of Aaron Swartz."

Christina DiIorio-Sterling, spokesperson for the United States Attorney Office said neither Heymann nor Ortiz would comment. "It is not appropriate to make a public comment," she said. "We want to respect the family's privacy at this time."

In 1998, Heymann also helped bring the first federal prosecution of a juvenile hacker, who brought down air traffic control communications at a Worcester Massachusetts airport. The unidentified teen plead guilty in return for two years probation, a fine, community service and was banned from using a computer with a modem for two years.

Heymann created one of the first computer-crime units in the country. Back in 1996, he prosecuted and supervised the electronic surveillance of the first case using a court-ordered wiretap on a computer network. "Harvard balked at the request," according to an article in Network World magazine (May 6, 1996). "We don't monitor the network, and we respect the privacy of our users," Franklin Steen, the Harvard network director told the magazine. To tap into the system, the DOJ had to get a court order, which came with a gag rule to keep anyone from tipping off the suspect.

The case found Argentinian Julio Cesar Ardita guilty of breaking into the Harvard University computer system, which he then used to break into numerous government sites, including the Department of Defense and NASA.

This is the face of the new Amerikkkan reich; nazis posing as political officials, catholics posing as americans pushing pot criminalization, corporate pigs pushing budget cuts killing off grandma years before her time, her situation forgotten in the rush to save or steal her resources for the next free oil war. Yeah, nazis.