Prague - Czech Social Democrat (CSSD) lawmaker Igor Jakubcik caused outrage with his statement that the Catholic Church was an ally of Nazi Germany and approved of Jews´ murders in the Chamber of Deputies today.

He took part in a debate on a draft amendment by some CSSD lawmakers, which extends the deadlines for the assessment of churches´ applications for the return of property to churches confiscated from them by communists and for checking the restitution decisions. The law on restitution took effect in January 2013.

Jakubcik also said the church assisted Nazi criminals when leaving for South America after the war.

"Such a social democracy is unacceptable for me," he said.

Based on Jakubcik´s logic, Sobotka professes collaboration with Nazism. "You have two options: either to shoot yourself to death, or vote no confidence in the government," Blazek said. 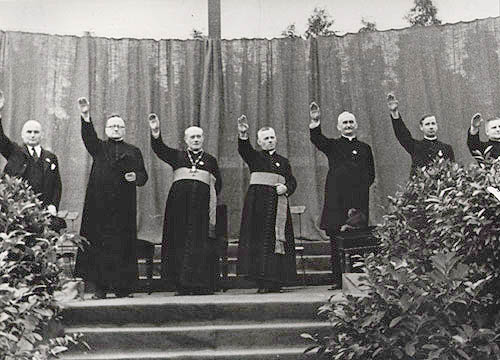 Jakubcik said later he has nothing against the current churches which he said suffered under the communist totalitarian regime.

He added he was only reacting to some words said in the debate and that what was happening during the war was a "black stain."

Culture Minister Daniel Herman (KDU-CSL), a former priest, said he considers this a sort of apology, but not sufficiently explanatory. He added that Jakubcik´s statements about collaboration do not correspond with historical facts.

Jakubcik made his statements one day after the Chamber of Deputies recommended to President Milos Zeman to award the For Heroism Medal in memoriam to Lidice priest Josef Stemberk whom the Nazis executed together with the other Lidice men on June 10, 1942.

Lidice, central Bohemia, was razed to the ground by the Nazis in retaliation for the killing of Deputy Reichsprotektor of Bohemia and Moravia Reinhard Heydrich by Czechoslovak paratroopers in May 1942. Its male inhabitants were shot dead and women and most children taken to concentration camps. Some children were taken to Germany for re-education.

The Real ODESSA: Smuggling the Nazis to Perón’s Argentina