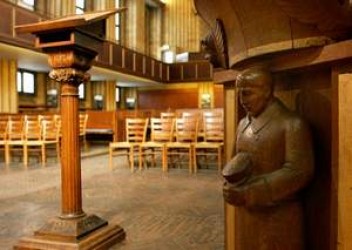 BERLIN // Entering the cavernous Martin Luther Memorial Church in Berlin is like taking echoing steps into the darkest era of German history.

The entrance hall has a black wrought-iron chandelier in the shape of an iron cross. The wooden pulpit is carved with a muscular, Aryan Jesus flanked by a Wehrmacht soldier and surrounded by a German family.

A statue of a Nazi stormtrooper adorns the base of the baptismal font. The organ was used at the 1935 Nazi party conference in Nuremberg. And the massive stone arch above the altar is covered with an unholy mixture of Christian and Nazi symbols. Carvings of crowns of thorns vie for space with helmeted soldiers’ heads and martial eagles clutching wreaths.

Those wreaths used to contain carved swastikas, but they were scratched out from the walls after the Second World War because the Nazi symbol is banned in Germany.

The Protestant church, located in the southern suburb of Marienfeld, seats more than 1,000 worshippers and was constructed between 1933 and 1935. It is now crumbling and the local parish is campaigning to save it from collapse.

It is unique because it contains more intact Nazi symbolism than any other church in Germany, which makes it a stark reminder that large parts of the German church, both Protestant and Catholic, succumbed to Nazi ideology during the Third Reich.

It is difficult to imagine that people are christened and married here and took part in regular church services until 2004, when the church was closed because its spire is crumbling.

However, occasional services, concerts and events such as confirmations still take place, along with ceremonies to mark historic anniversaries such as that of the liberation of Auschwitz on Jan 27 1945 and the anti-Jewish pogrom on Nov 9 1938.

Berlin’s Protestant church authority, which has been criticised by some historians in Berlin for neglecting the church and allowing normal religious services to take place despite its history, recently commissioned a local firm to develop a plan for its refurbishment and for its future use.

The parish has been trying to raise funds to save it, but has not managed to collect anywhere near the €3.5 million (Dh36.3m) required for a full repair.

“We would like it to be used both for religious services and for cultural purposes that do justice to its history,” said Volker Jastrzembski, spokesman for the authority. “It is worth preserving because it shows the collusion between the church and National Socialism especially clearly.”

Mr Jastrzembski, who is a pastor, admitted he would find it difficult to hold a service in surroundings so replete with Nazi ideology. “The hallelujah would stick in my throat,” he said.

Some pastors who have held sermons in the church said they felt overwhelmed by the sinister symbolism of the place.

But Hans-Martin Brehm, the local pastor who has been holding services in the church since 1983, said it was important that the building remain in use as a place of religious worship.

“It would be wrong for this to be turned into just a museum. It’s a lively place of worship because worshipping also has something to do with learning,” Mr Brehm said. “It’s important that we deal with the symbols and their message properly.”

The stones betray a history that Germany’s churches, both Protestant and Catholic, are still atoning for.

In the early 1930s, the Protestant Church came under the influence of a Nazi movement called the “German Christians”, who described themselves as the stormtroopers of Jesus and wanted to merge the faith with Nazi ideology and rejected the Old Testament as “Jewish”.

While many Protestants turned against the group, and scores of Protestant and Catholic clerics who opposed Adolf Hitler’s policies were pursued, neither church officially condemned the Nazis’ racial purity laws or the persecution of the Jews while it was happening.

Both churches declared their complicity in the crimes of the Nazis within months of the war ending in 1945. But that did not silence calls for deeper research into their actions under Hitler.

Recent studies revealed that they used thousands of forced labourers in church-run hospitals, homes, monasteries and farming businesses during the war. They have paid several million euros to compensate such labourers, and have commissioned further research.

The guilt echoes from the walls of the Martin Luther Memorial Church. “The longer I’ve been coming here, the more oppressive it is,” said Monica Geyler, director of the Berlin Forum, a group that studies historical buildings in the city and gives tours of the church.

“The figure of Christ on the cross is portrayed as a victorious Christ. If you imagine this smiling, healthy Christ was erected at a time of euthanasia and the persecution of Jews, he becomes ever more oppressive.”

“The figures on the pulpit equate the Christian community with a Germanic one listening to the Sermon on the Mount. The context makes it all so depressing. The church tells a lot about the era and about the susceptibility of people.”

The cash-strapped city of Berlin and the Protestant Church have said they cannot afford to repair the church on their own, and so far no private investors have come forward.

An application has been made to have the building classified as a historic monument, which would give it access to funds from memorial foundations.

Historians say the church serves as a warning to future generations. “It must be preserved, and we’d like it to become a place where young people are educated about the past,” Ms Geyler said. “This era needs to be explained over and over again.