Richard Williamson, planned to stand trial over questioning the scope of the Holocaust, hires member of far-right NPD part after previous lawyer pulled out the case. 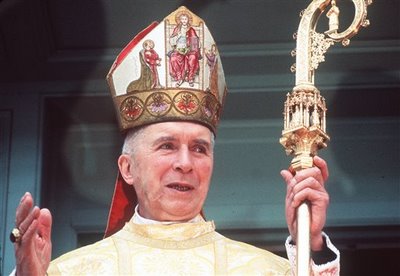 British Bishop Richard Williamson has appointed a radical right-wing lawyer to defend him in a German trial over his denial of scope of the Holocaust, Spiegel news magazine reported Saturday.

The lawyer, Wolfram Nahrath, is a member of the far-right National Democratic Party (NPD), the magazine wrote. He also led the Viking Youth, a neo-Nazi organization modeled on the Hitler Youth, until it was banned in 1994.

Earlier this week, his previous defense lawyer unexpectedly pulled out of the case, indicating that this was due to Williamson's choice of a new lawyer. The case is scheduled before court later this month.

Williamson, of the ultra-orthodox Catholic Society of St Pius X (SSPX), denied in a television interview last year that the Nazis had systematically murdered millions of Jews. The interview, for a Swedish television channel, took place in Germany, where Holocaust denial is a criminal offence.

Nahrath has reportedly asked the court to postpone the trial, scheduled for November 29, so he can familiarize himself with the material.

SSPX - which is seeking official recognition from the Vatican - has distanced itself from the lawyer and said it "could not accept the appointment of a neo-Nazi judge," Spiegel wrote.

Christian Thouvenot, the secretary general of SSPX reportedly said that this choice would inevitably cause them to separate from Williamson.

The bishop was fined 10,000 euros (14,000 dollars) in April over his remarks but his lawyer appealed against the fine, invoking a court appearance. Williamson's remarks shook the Catholic Church last year, as Pope Benedict XVI had ended the excommunication of Williamson and three other SSPX leaders weeks earlier.

In the TV interview, Williamson stated that no more than 300,000 people had died in concentration camps, and that nobody was killed in gas chambers.