" ... The appointment will give Opus Dei enormous influence in the American Church and Vatican, and is the most senior appointment for a member of the group. ... "

A member of the radically-orthodox Catholic group Opus Dei has been appointed as the new Archbishop of Los Angeles. 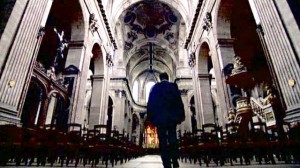 Jose Gomez has been parachuted into the archdiocese of five million to try to lure the increasingly lapsing faithful of southern California back to Church.

The appointment was described as the Pope's revenge on Hollywood for filming The Da Vinci Code.

Benedict XVI's choice comes after Colombia Pictures depicted Opus Dei as a secret society of murderous monks who, according to author Dan Brown, were trying to cover up the truth of Jesus's secret affair with Mary Magdelene. The appointment will give Opus Dei enormous influence in the American Church and Vatican, and is the most senior appointment for a member of the group.

It will also lead to Mexican-born Gomez, formerly the Archbishop of San Antonio, Texas, becoming the first Latin American US cardinal, a position that will give him influence in Rome and the right to vote at a papal conclave.

The choice is likely to dismay the Catholics of Hollywood, which falls within the archdiocese. The reigning archbishop, Cardinal Roger Mahony, avoided confrontation, but Archbishop Gomez is less likely to duck controversy.

Opus Dei, which he joined in 1978, is seen as one of the most devout of all the Catholic groups. Some of its priests practise self-flagellation while praying to the Virgin Mary and also wear a cilice – a spiked garter – to help them to mortify the flesh and avoid sexual sins.

One of Archbishop Gomez's primary tasks will be to deal with the fallout from the abuse crisis.

None of the 2,000 priests of Opus Dei, which has the status of a "personal prelature" of the Pope, has ever been embroiled in a sexual scandal.

The Archdiocese of Los Angeles, however, is one of the worst afflicted by the clerical sexual abuse crisis that has convulsed the US Church since 2002. Three years ago Cardinal Roger Mahony, the reigning archbishop, agreed to a record-setting £430 million settlement with more than 500 alleged victims of clergy abuse.

A federal grand jury is also investigating how the Archdiocese of Los Angeles handled claims of abuse.

Archbishop Gomez, 58, will work alongside Cardinal Mahony and take over when he retires next year. One of his first tasks will be to reform the priesthood.

"I welcome Archbishop Gomez to the Archdiocese of Los Angeles with enthusiasm and personal excitement," Cardinal Mahony said.

In a statement posted on the Los Angeles archdiocese website, Archbishop Gomez said:

"When I was collecting my thoughts for today, I wrote down that the Archdiocese of Los Angeles is one of the great Catholic communities in the United States. But it’s really much more than that. It’s one of the great Catholic communities in the world. Los Angeles, like no other city in the world, has the global face of the Catholic Church. That fact invites us to do two things: first, to thank God for our diversity and the energy it creates; and second, to commit ourselves more deeply to the things that unite us – a zeal for Jesus Christ; confidence in the Gospel; reverence for the Eucharist; service to the poor; defence of the unborn child, the immigrant and the disabled; and a love for the Church as our mother and teacher. These are the things that have purified and renewed the Church in every generation. And being with all of you now as part of Cardinal Mahony’s ministry is the greatest gift I've received in my life next to the priesthood itself."

Archbishop Gomez is one of 22 bishops worldwide who belong to Opus Dei, a movement founded in 1928 by St Jose Maria Escriva, a Spanish priest, to help Catholics to find salvation through their ordinary working lives.

Its penitential practices, courting of the professional classes, and its loyalty to the Pope has incurred the distrust of many within the Church and outside it.

The book In God’s Name, bu David Yallop is a good read about nazi/black order infiltration of the catholic church and the recent huge corruptions of church doctrine and theology that proceeded from that. There is no beast worse than those who figure that they are chosen to be the judgement of God based upon their position in society and their attainment of worldly success. God Bless You, Heal you, and keep you in the name of Father, Jesus Christ and all the saints and angels, especially his mother and the Holy Spirit in these dark times prophesied so long ago. Remember the central miracle of the bible is Christ’s immaculate conception and that is the root of all other deliverance and resurrection powers out there.

And also remember the four nuns of the Maryknoll missions and two priests who were raped and murdered in El Salvador along with Ben Linder, murdered by US supported Alactl millions of others murdered were not listed in the massacre coverup US media, slaughtered for an easy dirty global military-corporate buck.

Look at the Christian example of the new testament; there’s mercy and forgiveness in it. When the priests of liberation theology preached the preferential option for the poor, they were targetted by the traditionalist elites in the churches because God wanted some of their wealth. That was not the central issue though; it was the thought that those dirty, foul subhuman peasants who gave them their wealth were also self-determining human beings with their own independent perspective on their situation and it’s origins. Remember Pablo Friere, Archbishop Romero, Archbishop Dom Helder Camera, and read the book The Church and the National Security State by Jose Comblin. The truth will out.

Re: Ratzi the Natzi as he is referred to, here is his Wikipedia page quote, my comments in []
Following his 14th birthday in 1941, Ratzinger was conscripted into the Hitler Youth…In 1941, one of Ratzinger’s cousins, a 14-year-old boy with Down syndrome, was taken away by the Nazi regime and killed during the Aktion T4 campaign of Nazi eugenics.[11] [some say Ratzi the Natzi turned him in to get a leg up in the Natzi party as a Good German] In 1943, while still in seminary, he was drafted into the German anti-aircraft corps as Luftwaffenhelfer.[10] [ya know, the guys who bombed millions of people to oblivion] Ratzinger then trained in the German infantry…As the Allied front drew closer to his post in 1945, he deserted [he was a deserter too] back to his family’s home in Traunstein after his unit had ceased to exist [?????], just as American troops established their headquarters in the Ratzinger household[citation needed][say what, was this the HQ of Operation Paperclip to smuggle Nazis into the US using dead Jewish Concentration camp survivor ID’s]. As a German soldier, he was put in a POW camp but was released a few months later at the end of the war in the summer of 1945[citation needed]. He reentered the seminary, along with his brother Georg, in November of that year. [where they began creating homomanchurian candidates to set up politicians, judges, cops, etc. to gain votes. Easy, little GHB in the drink, hotel pictures with you and little boys, in the morning they had your vote. This is why no charges against any of the PEDOPHILE PRIESTS Ratzi the Natzi has deployed. Has the Catholic Faith been overtaken by Nazis disguised as their Religous leaders???