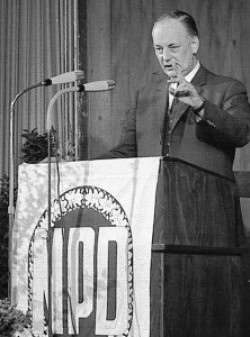 New information has surfaced alleging that the late Adolf von Thadden, who founded the German far-right party NPD, was actually an agent for the British Secret Service, M-I6.

The allegations, first printed earlier ths year in Cologne daily Kölner Stadt-Anzeiger, charged that von Thadden worked for M-I6 while leading the NPD to a string of local election victories, from 1967-1971. The report said von Thadden passed information on NPD members to British intelligence officers during clandestine meetings in a Hamburg hotel.

British newspaper The Guardian this week alleges von Thadden’s ties go even farther back, all the way to the party’s founding in 1964. That information comes from Dr. Hans Josef Horchem, who was the head of the Hamburg office of the Verfassungsschutz – the West German security service – from 1969 to 1981. During that time, Dr. Horchem recieved visits from British intelligence officers.

“We held general discussions on security. At one of these – I think it was towards the end of the 70s- they said, ‘Adolf von Thadden was in contact with us’, and that that was in the 1950s”. Dr. Horchem did not know whether the links between the German and British intelligence had continued into the 60s and 70s.

His younger sister, Barbara Fox von Thadden, said she had had no reason to suspect her brother worked for British intelligence. But she added that they had very different political views and steered away from political discussion.

They had an English grandmother, and Ms Fox von Thadden said her brother “did like coming to Britain, and did like Britain very much”.