A former horse riding school in the tiny Baltic state of Lithuania was used as a secret CIA prison to hold and interrogate top al-Qaeda terrorists, it has been claimed. 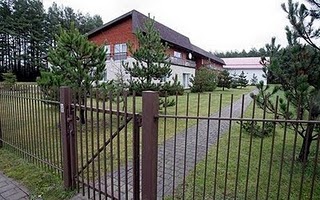 A photo taken on November 19, 2009 shows a training center of the Lithuanian State Security Department, the country's domestic intelligence agency, in Antavilis near Vilnius Photo: AFP/GETTY

The allegations have sparked a parliamentary inquiry after President Dalia Grybauskaite said she harboured "indirect suspicions" that such a facility existed.

According to unnamed former intelligence operatives quoted by ABC News, the CIA built the secret jail in 2004 and used it for more than a year, flying in at least eight suspected al-Qaeda terrorists from Afghanistan.

MI5 and MI6 get go ahead for secret hearings The prison was reportedly built from scratch on the territory of a former horse riding school about 15 miles from Vilnius, the Lithuanian capital, and included an underground annex. Pictures of the building said to be the former CIA jail show a bland-looking two-storey house surrounded by a fence and CCTV cameras. Locals say the building, which is now used as a training facility by Lithuania's state security service, originally had no windows.

Politicians in office at the time have denied all knowledge of such a prison and say there is no evidence to prove it existed. But President Grybauskaite has insisted that the claims be properly investigated.

"If this is true, Lithuania has to clean up, accept responsibility, apologise, and promise that it will never happen again," she said.

The scandal has affected the former Soviet republic's relations with Washington. Lithuania has said it will not accept a single former prisoner from the Guantanamo Bay prison until the matter is clarified. Former US government officials have suggested Lithuania was eager to please the Bush administration at the time in order to thank it for securing Lithuania membership of Nato in 2002.

The allegations make Lithuania the third European country after Poland and Romania to be accused of hosting secret CIA "black sites".