The Eichmann Files - Classified Documents Could Be Released After 50 Years 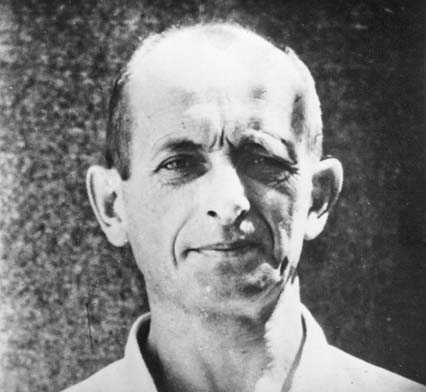 Fifty years after Nazi war criminal Adolf Eichmann's arrest by the Israeli Mossad in Argentina, basic details about his 15 years as a fugitive remain a government secret. The files kept by Germany's foreign intelligence agency, the BND, remain classified today - allegedly for reasons of national security. A German journalist is now suing in a federal court for the release of the files.

Fifty years have passed since Adolf Eichmann's arrest, but the German foreign intelligence agency, the BND, is still hoping to prevent the release of files detailing his post-war movements. A Federal Administrative Court in Leipzig is currently examining almost 4,500 pages of secret documents on Eichmann, a leading architect of Hitler's plans to murder Europe's Jews. The court is soon expected to rule whether the BND's justifications for concealing the files are still applicable and in line with the country's freedom of information laws.

The court is using closed "in camera" proceedings in which the three judges considering the case are the only people with access to the files.

"What's especially interesting is the sheer amount of paperwork that the government is concealing," says lawyer Remo Clinger, whose law firm Geulen & Klinger is representing German journalist Gabriele Weber in her case before the Leipzig court.

According to paperwork filed with the court, the BND maintains that secrecy is necessary because much of the information contained in the files was provided by an unnamed "foreign intelligence service." If the information were released, the BND argues, it would deter other nations from sharing intelligence with Germany in the future. "It would adversely affect future cooperations between foreign intelligence services and German security agencies," the agency's lawyers argue. The fact that the files are classified has prompted considerable speculation over the origins of the intelligence. The BND has clarified that the intelligence did not come from an American source, and it is widely assumed that it came from Israel's Mossad, whose agents captured Eichmann in Buenos Aires in 1960. He was subsequently brought to trial in Israel, where he was convicted and hanged.

Uki Goni, a prominent Argentine journalist and expert on the post-war Nazi fugitives, has taken a special interest in the BND files and thinks that references to a foreign intelligence service are a smokescreen. "They could easily redact the name of the intelligence service and the name of the informants," he told Spiegel Online. "The files would not be embarrassing to any other secret service but to Germany itself." Goni believes the files would reveal hitherto unknown levels of collusion between the German government and Nazis who fled overseas to escape prosecution.

In his book, "The Real Odessa," which describes how the Peron regime systematically aided Nazi war criminals, Goñi documents how Nazi war criminals lived free and easy in Buenos Aires. German Foreign Service members and Nazis visited the same establishments and drank in the same beer hall. The Nazis didn't hide their allegiances either: "The Nazis would come in, click their heels and throw up their traditional salute," said Goni. Eichmann didn't feel the need to keep a low profile in that community. The German embassy in Buenos Aires gave his wife and children passports in their own name, just as they had given infamous Nazi doctor Josef Mengele a passport.

Attorney Reiner Geulen thinks that the most explosive information enclosed in the files pertains to Eichmann's flight from Germany. "He was very chatty in Jerusalem - he knew he was going to die anyway," said Geulen. According to Geulen, Eichmann explained in great detail who helped him flee Germany and then Europe - information the Israelis were very interested in. "There is good reason to believe that he received help from German, Italian and Vatican officials," he said.

'The Time Has Come To Open Them Up'

One of the problems was West Germany's well-documented reluctance to hunt Nazi war criminals. "Why do you think the Auschwitz prosecutor, and Frankfurt public prosecutor, Fritz Bauer, traveled to Israel to the tell them about Eichmann's whereabouts instead of telling his own government?" asks Wilhelm Dietl, a former BND agent and author of a book about Eichmann's abduction from Argentina. "He didn't trust the Germans to want to find Eichmann."

Bauer's biographer, Irmtrud Wojak, agrees. She believes Bauer was reluctant to report Eichmann's whereabouts to his own government because of the number of former Nazis in office. "Last but not least, Werner Junkers, an ex-Nazi was the ambassador to Argentina," she wrote. Bauer feared someone in the government might tip Eichmann off.

Adolf Eichmann's son Ricardo Eichmann, an archaeologist in Berlin who has repeatedly expressed his disgust for his father, concurred with that view. "Whatever it says in those files," he told Spiegel Online, "the time has come to open them up for academic evaluation."

Reiner Geulen, of Geulen & Klinger, is confident the trial in Leipzig will yield results. "We presume that many of the files will be released, though they may be heavily redacted," he said. A decision is expected soon.

For his part, journalist Goni believes releasing the information will do more to boost Germany's reputation than besmirch it. "Whatever the German secret service did in the 1950s should not embarrass anyone today," he says. "The only thing that should be an embarrassment today is that they are trying to hide that information."