Corpwatch » On Smedley Butler and the FDR Coup Plot 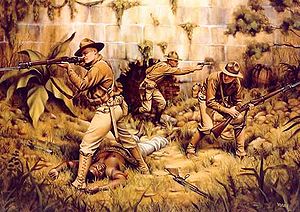 Major General Smedley Butler (1881 - 1940), left school 38 days before his 17th birthday and joined the U.S. Marines during the Spanish-American War. The former commandant of the Marine Corp. was the most decorated Marine in U.S. history at the time of his death. He is one of only 19 men to have received the Congressional Medal of Honor twice.

Butler was an outspoken critic of U.S. foreign policy, as observed in the following Butler quote in a socialist newspaper in 1935.

"I helped make Mexico and especially Tampico safe for American oil interests in 1914. I helped make Haiti and Cuba a decent place for the National City Bank boys to collect revenues in. I helped in the raping of half a dozen Central American republics for the benefit of Wall Street. The record of racketeering is long. I helped purify Nicaragua for the international banking house of Brown Brothers in 1909-12. I brought light to the Dominican Republic for American sugar interests in 1916. I helped make Honduras 'right' for American fruit companies in 1903. In China in 1927 I helped see to it that Standard Oil went its way unmolested... Looking back on it, I felt I might have given Al Capone a few hints. The best he could do was to operate his racket in three city districts. We Marines operated on three continents."

In 1935, a couple of years after his retirement from military service, Butler wrote a book titled WAR IS A RACKET. In it, he suggested the U.S. Navy should be prohibited from traveling beyond 200 miles from the U.S. coastline, military aircraft should be confined within 500 miles of the U.S. coastline, and the U.S. Army to be prohibited from leaving the USA. He also proposed that any future declaration of war should be passed by a vote in which the only ones eligible to vote would be those subject to conscription into military service.

A "coup d'etat" is the sudden, illegal overthrow of a government, to be replaced by others.

In 1934, a small cabal of influential elitists attempted to overthrow the President of the United States and replace him with fascist style dictator (similar to Hitler) to counter FDR's socialist polities, which they believed were contrary to the U.S. Constitution. They suspected FDR was secretly a communist. Some of FDR's goals were a redistribution of wealth and an active role by federal government in the American economy.

The plot included $3 million in funds and a fascist march on Washington by 500,000 veterans. FDR would then be captured and the leadership would be taken over by a military-based government.

Gen. Smedley Butler was approached by the plotters and urged to head the new government. Butler had a reputation as the enlisted man's general -- he would have attracted many veterans to the cause. Plus, he had many allies in the current military establishment who might have gone along with the conspiracy.

However, Gen. Smedley Butler believed in the U.S. Constitution, something he had sworn all his life to uphold -- he blew the whistle and the whole conspiracy came to a halt.

"There are only two things we should fight for -- one is the defense of our homes and the other is the Bill of Rights." - Smedley Butler

Congress appointed a special committee to explore the matter, where it stalled for four years due to various political considerations and the clout of those involved at the top. No prosecutions or further investigations followed.

When the committee's final report was released, the NEW YORK TIMES wrote that the committee "purported to report that a two-month investigation had convinced it that General Butler's story of a Fascist march on Washington was alarmingly true."

In the final committee report -- "In the last few weeks of the committee's official life it received evidence showing that certain persons had made an attempt to establish a fascist organization in this country... There is no question that these attempts were discussed, were planned, and might have been in execution when and if the financial backers deemed it expedient."

The next coup d'etat in the USA took place in November of 1963.

The true rulers of Planet Earth work behind the scene. They control monetary systems, governmental bodies, military-industrial complexes and the media.

And they don't take kindly to those who oppose their grand schemes.

Quote for the Day -- "War is a racket... I believe in adequate defense at the coastline and nothing else." - Smedley Butler

Bret Burquest is the author of 8 books, including THE REALITY OF THE ILLUSION OF REALITY, ORB OF WOUNDED SOULS and PATH TO FOURTH DENSITY (available on Amazon). He lives in the Ozark Mountains with a dog named Buddy Lee.

Did Roosevelt’s New Deal End the Great Depression? | The Most Revolutionary Act August 30, 2021
| |

Butler was a brave soldier as a youth, but it should be pointed out that his WWI decorations were not earned in combat; he was a brilliant administrator whose efforts to coordinate rear-area logistics were recognized by those medals.

Revealed: Multimillionaire du Pont family heir spared jail for raping his three-year-old daughter because judge decided he would 'not fare well' behind bars