From Gabriele D’Annunzio to Berlusconi – via Mussolini (Book Review)

Gabriele D’Annunzio visited England in February 1914. True to form, he used his time here to cheer on the slaughter of some terrified innocent creatures. After sharing a bed at the Savoy with two of the four women who accompanied him (more trademark behaviour), the dandy poet, playwright and novelist – still to embark on his chief political and military adventures – travelled up to Great Altcar in Lancashire. There he watched hares being torn to pieces for the annual highlight of the coursing calendar, the Waterloo Cup.

How fitting that the iconic proto- fascist’s visit to these shores should merge his two most abiding interests: spectacular violence, and predatory sex pursued strictly on his own terms. By the end of that year, the coming of the First World War had thrust the self-dramatising aesthete and passionate militarist into the front line, literally and figuratively. He would parlay his genuine bravery on the battlefield and as a pioneer aviator – who dropped actual bombs on Austrian-ruled Trieste and incendiary pamphlets on the enemy capital, Vienna – into a starring role on the stage of public life. It saw him not only clear the path for Mussolini’s fascist regime, but become a serious rival to Il Duce as the most likely leader of a savagely authoritarian new Italy.

On Monday evening, Lucy Hughes-Hallett’s utterly compelling biography of this sulphurous figure – The Pike – won the Samuel Johnson Prize for non-fiction. Mixing close-focus immersive storytelling with wide-screen historical reflection, the book triumphantly shows that one can write the life of a complete bastard and still keep the reader onside, and the author’s moral compass intact. As she drily notes of others who have simply cursed her subject, “disapproval is not an interesting response”. Superbly deployed, her sources reveal all the seductive charm of the narcissistic bully, deployed in the sexual, artistic and political arenas over the half-century from his sensational first novel, The Child of Pleasure, in 1889, through to his death as a national hero in 1938.

Modern European history scarcely has a stranger tale to tell. No mere dilettante in the vein of the painter Hitler and the poet Stalin, the prolific D’Annunzio had by the late 1900s become a dominant figure in Italian and indeed wider European literature. He braided lush late romanticism and the new wave of symbolism into verses, plays and novels that shook erotic, heroic and fantastic elements into a heady, mesmerising cocktail. Proust, Joyce and Henry James all praised his early work. A prototype literary rock star, he kept adoring groupies all over Europe, even as his pretty youthful curls fell out to be supplanted by the bald, bullet-headed bulldog look that would serve him – and his strutting imitators – so well in the future.

His lovers were invariably treated to a wild ride of acrobatic passion, control-freak idealisation and ruthless disdain when he tired of them. They included his great love Eleanora Duse, the most acclaimed actress of her time after Sarah Bernhardt. (He may, in fact, have slept with the Divine Sarah as well.) Dancer Isadora Duncan, as Hughes-Hallett reveals, reported that a woman courted by D’Annunzio “feels that her very soul and being are lifted into an ethereal region”. Distinguished men too fell for his silver-tongued allure. Writer-diplomat Harold Nicolson, having first snobbishly dismissed the mayor of Pescara’s son as “a chap one couldn’t know”, soon left a poetry reading “fervent with excitement”.

Yet, within a decade, D’Annunzio had test-driven a form of political power that wannabe strongmen all over the continent observed with fascinated admiration. In September 1919, he and his smartly uniformed squads of Arditi took control of the disputed port city of Fiume (now Rijeka in Croatia). They held it in a carnival of pomp and blood until Italian forces drove them out at Christmas 1920. In effect, D’Annunzio’s Fiume constituted the world’s first fascist state. Intellectuals who voice the hope that writers and artists should exert more influence on public affairs should study the fate of Fiume and be careful what they wish for.

By late 1922, when blackshirted thugs seized power in Italy street by street, town by town, cosh by cosh, the self-appointed “Regent” of Fiume posed a rhetorical question to his political heir Benito Mussolini. “In the movement which calls itself ‘fascist’ has not the best been engendered by my spirit?” If not the “best”, certainly the most typical: Mussolini could hardly have contradicted his forerunner.

Like many progenitors, D’Annunzio came to believe that Il Duce had “squandered” the legacy he gave him and vulgarised the fascist idea. No matter. The line of descent and inspiration is as pure as the cocaine that D’Annunzio so enthusiastically snorted. Not for nothing did Mussolini encourage a biography of D’Annunzio to be called The John the Baptist of Fascism. The poet-warrior never lost his popularity in Italy. Mussolini, justifiably, later came to fear him.

Above all, D’Annunzio introduced to the young, brittle nation of united Italy the toxic idea of power as performance: one that switches in a flash between charm and charisma on one hand, brutality and braggadocio on the other. Mussolini learned that lesson all too well. So, arguably, did Silvio Berlusconi during his – hugely successful – spells as seducer, debaucher and exploiter of the Italian state. One doesn’t need to label Berlusconi a “fascist” (which he isn’t) to find the deep affinity that links these three myth-making populists.

Neither is this penchant for outrageous chancers confined to Italy. For as long as a jaded mass democracy turns away in boredom from the grey, bureaucratic men-in-suits who manage most politics, the meretricious glamour D’Annunzio heralded will still appeal. But then a prolific author with a roguish reputation as a ladies’ man, a knack for crowd-pleasing stunts and a shaky grasp of economics could never come anywhere near the levers of power in Britain. Could he? 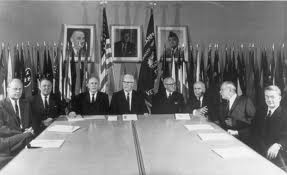 The Warren Report: The Mother of All Coverups (2004 Salon Article)
Nov 10