‘Agent Orange has Given Me a Death Sentence’ 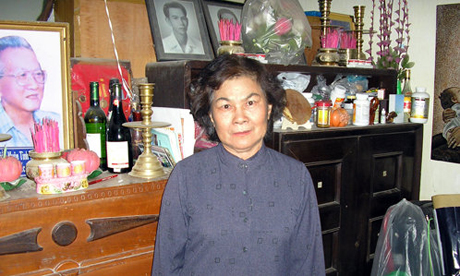 During the Vietnam war, the US army sprayed 18 million gallons of the toxic chemical Agent Orange over Vietnam to destroy food sources and defoliate hiding places of the Viet Cong. Thirty years after the war, three million Vietnamese are still suffering from the effects of the poison, which can cause birth defects and cancer, has had a devastating impact on the environment and is now affecting a third generation of victims. Vietnamese victims have yet to receive any compensation. Dang Hong Nhut was 29 years old when she joined the resistance forces against the US army and was heavily exposed to Agent Orange. She works with The Vietnam Association for Victims of Agent Orange and The Vietnam Agent Orange Campaign to lobby for compensation for the victims.

I was born in 1936, in the Cho Gao district of Vietnam, close to the Mekong Delta. Life was very hard when I was a child. The French had colonised Vietnam and there was a resistance war, and a lot of fighting in our village.

I remember one time when I was just six years old, French soldiers came to our house and told us to leave, they thought something political had been going on and wanted to burn the house. My Grandmother stood her ground and bravely refused. It was this event that politicised me. I realised then, at this young age, what was right and wrong.

I got married in 1959 and gave birth to a baby boy. In 1965 I was living in Saigon, working as a dress maker. The city was peaceful at this point, although the US had invaded and there was conflict in the areas surrounding Saigon. At this time, there was a huge uprising of the peasants and a growing Buddhist movement against the US invasion. I felt passionately about equality and joined the resistance called ‘the long haired army’.

I didn’t take up arms during the war, our role was to raise funds, demonstrate against the invasion as well as helping young men to avoid conscription. My husband was also involved in the resistance and it was when I visited the area around Chu Chi to see him that I was sprayed with Agent Orange. I saw the planes coming and hid in a shelter. After they had gone, there was white dust everywhere. I didn’t realise anything was wrong for a long time – I had very itchy skin, scabies and diarrhoea, but had no idea why.

I was arrested in 1966 by the US-supported government. A woman from the resistance had been tortured and gave my name to the authorities and I was imprisoned. I spent six years and nine months incarcerated. I was taken to the infamous Con Son Island prison and was shackled underground in a barbed wire tiger cage for nine months.

I suffered continuous beating, days and night – the guards wanted information about the resistance. I can’t put into words the suffering. I was also electrocuted many times. They put electric wires on my nipples, vagina and under my fingernails. They hung me upside down and used ‘water boarding’, water was poured on my face constantly and you feel like you are drowning, it’s terrifying. I suffered so much pain then, but I thought that if I gave out any names of other resistance fighters, they too would suffer the pain, so I refused.

When they finished torturing me, I was taken to court for prosecution and the only crime they could charge me with was writing leaflets. I was sentenced to three years.

I was released from prison in 1972, and it was then that I had my first miscarriage. I had no idea at the time that this was due to my exposure to Agent Orange. I had three more miscarriages after this and then in 1977, I became pregnant again. I so hoped I would deliver a baby, but the baby was born early, at five months. When it was born, the doctor told me it was dead and took it away before I had a chance to see it. They told me the baby was so deformed, they were afraid for my health if I saw it.

It was then I was told I’d been affected by Agent Orange and shouldn’t try for any more children. That was devastating for me: it was peace time at last after so many years of war, and I so wanted to have another child. Being unable to have more children has left misery.

In 2004, I was invited with other mothers to see our babies who had died. They had been kept at Tu Du Maternity Hospital as specimens in jars. We were taken to a room, and there in glass bottles were our babies. I can’t describe the pain of seeing my baby so many years later. Some women fainted. The babies were all so deformed, some had two faces, others were twins joined at the body, some had limbs distorted, and others had their intestines on the outside of their bodies. It was horror.

Agent Orange has continued to affect my health. In 2002, I was diagnosed with cancer in the intestine. A year later, I had another tumour in my throat. I was terrified I was going to die.

In all wars, there is tragedy, but the consequences should be immediate, rather than using chemicals that affect people for generations to come. The use of Agent Orange is an unforgivable crime. It’s wiped out future generations and has eradicated untold numbers of families. Children are still being born with deformities. My husband, who was also exposed to Agent Orange, died in 1999 of cancer.

I often worry about the future and feel I have a death sentence that has not yet been carried out. Who knows what will happen, but I know there will be more suffering, for me and thousands of others too.

I have a burning anger in my heart. The US government has paid compensation to US soldiers affected by Agent Orange, but Vietnamese victims have received nothing. The chemical manufacturers of Agent Orange, Dow Chemical and Monsanto, have also never taken any responsibility for the suffering they have caused. They all have an obligation to take responsibility and compensate us, for the devastating impact of Agent Orange and we won’t give up until we get justice.