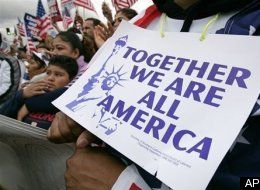 LAS VEGAS – Arizona’s controversial new immigration law, and the numerous similar proposals it has inspired across the country, show that Latinos – not just undocumented immigrants – are under attack by Republicans, a labor leader said today. 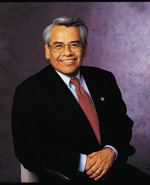 “The Republican Party appears to have declared war on Latinos in this country,” Eliseo Medina, international executive vice president of the Service Employees International Union, said at Netroots Nation, the largest gathering of liberal activists of the year.

He pointed to other proposed laws recently put forward: A Republican congressional nominee in New Mexico suggested the United States could place land mines along the Mexican border to stop illegal immigrants. Arizona’s Department of Education has ordered schools to remove teachers with heavy accents.

“Illegal immigrants has become the code word for Latinos,” Medina said. “What we’re faced right now is not a public policy debate. It is an ideological and political battle.”

The Obama administration has taken a side in the debate, labeling Arizona’s immigration law, which makes it a state crime to be in the country illegally, potentially racist and challenging it on constitutional grounds. Yet the administration made its own racial misstep in the past week, firing USDA official Shirley Sherrod based on an out-of-context video posted to a conservative website.

The race-based incidents have left liberal activists at the Netroots conference questioning what really needs to happen to improve civil rights.

Kate Kendell, who leads the National Center for Lesbian Rights, noted that the gay community has won a handful of legal victories recently, such as the recent Supreme Court ruling that a religious student group cannot discriminate against gays.

However, Kendell said that legal equality alone cannot be the basis for true equality in society. She pointed to the racial disparity in U.S. prisons as evidence.

Medina said that while most people “believe in justice and believe people ought not to be discriminated against,” the Republican party has become skilled at dividing people over issues such as immigration.

“There are such big problems in this country, and we have to stop being divided,” he said.

Immigrants and Latinos have to be more politically empowered to fight back against the GOP, he argued.

“We have to show that immigrant bashing is the path to permanent minority status,” he said.