Zirin is a former federal prosecutor in the Southern District of New York. 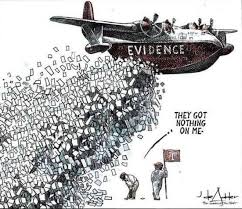 The clock is running out for the Justice Department’s investigations of Donald Trump and his co-conspirators, and Attorney Merrick Garland’s batting average so far has been less than underwhelming.

In its closing argument, the Justice Department attorney vainly told jurors that Barrack schemed to become the “eyes, ears and the voice” for the Emirates as part of a criminal conspiracy to manipulate Trump’s foreign policy. His tepid summation couldn’t close the deal with the jury.

Justice is supposed to bring a case only when they believe they can convince a jury of guilt beyond a reasonable doubt. In the Barrack case, the jury came back leaving a key Trump fundraiser free to go home, and the DOJ with egg on its face.

The criminal contempt case against Steve Bannon for defying a congressional subpoena seemed open and shut. Following a jury verdict convicting him of two counts of criminal contempt of congress, Federal Judge Carl Nichols, who presided at the trial, sentenced Bannon to four months in jail, less than the six months prosecutors recommended.

Nichols said that Bannon had “expressed no remorse for his actions,” but promptly stayed surrender, pending appeal, because of a “substantial question of law that is likely to result in a reversal or a retrial.”.

The “riddle wrapped in a mystery inside an enigma” is why Garland has not yet indicted Trump for mishandling classified documents in violation of the Espionage Act, as well as other federal statutes. Professor Laurence Tribe of Harvard Law School thinks “it’s time to indict Donald Trump for espionage and related federal felonies including obstruction.”

Citizens for Ethics has concluded that there at least 56 criminal charges of which he may be accused since he announced his campaign for president in 2015.

At a criminal trial in New York, the Trump Organization comptroller recently testified that a note on Donald Trump’s personal ledger referring to Allen Weisselberg was removed before the organization turned over a copy to the grand jury. That’s potential obstruction of justice.

While in office, The New York Times just reported, Trump repeatedly asked the White House chief of staff to order a number of his putative political enemies to be investigated by the IRS, including FBI Director James Comey and his deputy, Andrew G. McCabe. Against long odds, both men were selected for “random” audits, and the IRS inspector general is investigating why. It is a criminal offense for a president to request the IRS to audit any particular taxpayer.

Prosecuting Trump over Jan. 6 or the Mar-a-Lago documents are bigger enchilada, and the wheels of justice are grinding ever so slowly. Hamlet long ago decried “the law’s delay.” Garland is a latter-day Hamlet, a man of action delayed by thought. He appears to be dithering over the irrelevant fact Trump did not steal the classified documents to sell them or, show them to others or even give them away. His motive, according to a leaked report, was innocent: ego or and to keep trophies and souvenirs of his time in office. Of course, if a thief steals a moose head mounted on the wall of your study, it obviously makes no difference whether the motive was to mount it on the thief’s own wall or to fence it uptown. A different standard should not apply to Trump.

Then, there is obstruction of justice over the failure to deliver the Mar-a-Lago documents called for by the grand jury subpoena. Of all the things Trump is being investigated for around the country, obstruction of justice is a slam dunk, and I think he is going to be indicted,” Frank Figliuzzi, the former FBI assistant director for counterintelligence, told Bloomberg. So where is our attorney general to bring home the bacon?

It’s been 100 days on the shot clock since the Mar-a-Lago search, and many months since the DOJ investigation began. Last month, Bloomberg reported that Justice Department prosecutors believed they had amassed sufficient evidence to charge the former president with obstruction of justice arising from the classified documents. However, from all that appears, they have yet to recommend as much to Garland.

The New York Times reported the damning evidence that a security camera caught a long-serving Trump staffer moving boxes after the subpoena demanding the return of all classified documents. The Washington Post piled on with the statement that a Trump employee told investigators that documents were moved at Trump’s explicit direction post-subpoena.

There is the unwritten Justice Department policy of not filing an indictment within 60 days of an election. and there is the consideration of the Dec. 6 runoff election in Georgia. But Tribe is correct: It is “wrong” to wait. You can’t be an effective prosecutor if you are afraid to lose.

The best bet for a speedy prosecution of Trump may be the Fulton County case, looking at Trump’s attempt to pressure officials to get him the votes necessary to win the state of Georgia. The prosecutor, Fani Willis, is not bound by Justice Department policies about not indicting before an election or reported public interest concerns about not indicting a candidate for president lest we appear to be a banana republic.

A Brookings report just released concluded that Trump is “at substantial risk of criminal prosecution in Fulton County” for attempting to overturn the 2020 election. If so, at least someone will hold the guy accountable.

Meanwhile, Trump plans to head off possible indictment when he is expected to announce a 2024 presidential tonight tonight at, where else, Mar a Lago.