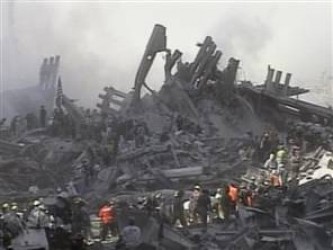 The federal government is backing out of a requirement to treat Downtown residents, office workers and students for 9/11-related illnesses, saying it needs more time to study the problem.

Before providing any funding to people other than first responders, the Department of Health and Human Services wants more data on those people’s exposure levels to World Trade Center toxins and their subsequent health problems.

Any money the department spends on residents, office workers and students this year will go toward gathering and analyzing data — and only after that will the agency decide how much money, if any, to allocate for screening and treating non-responders. This directly contradicts a law passed by Congress last year that was supposed to pay for treatment for non-responders for the first time.

“More than six years after 9/11, it’s time for the Bush Administration to stop dragging its feet [and] provide the help that Congress intended,” Rep. Jerrold Nadler said in a statement to Downtown Express.

Late last year, President George W. Bush signed a law that included a provision that for the first time would have used federal money to pay for health treatment for groups other than first responders. He agreed to Congress’s 2008 allocation of $108 million for both responders and non-responders. Health advocates hailed the law, saying it would provide much-needed funds to programs already treating thousands of people.

But in February, the Bush administration announced that it would only commit $25 million to 9/11 health in fiscal year 2009, which begins this October, and the feds also cut out language referring to residents, office workers and students. Congress demanded an explanation of the federal government’s future plans for 9/11 health, and the U.S. Department of Health and Human Services replied with a report that questions the need for non-responders to receive services.

“It’s a very complex issue,” said Holly Babin, a spokesperson for H.H.S. “We have to ensure the proper management of federal resources.”

Since this is the first time Health and Human Services has been asked to fund programs for non-responders, the department has to gather data on “exposure levels in relation to geographical scope and the resulting health effects,” according to the report. H.H.S. is meeting with the W.T.C. Environmental Health Center, which currently provides treatment to non-responders at Bellevue Hospital and other locations in New York City. H.H.S. will gather information from the Environmental Health Center and then decide how much funding to provide, if any. For the first year, though, the federal money will likely go toward determining the need, not treating patients.

“Congress was clear in its call for H.H.S. to develop a comprehensive, long-term plan to treat and monitor area residents, workers, students and others who were exposed to Ground Zero toxins,” Nadler said. “Clearly, H.H.S. has failed to deliver. The administration must end its delays and get this money — already appropriated — to help the living victims of 9/11.”

New York City is already funding three centers of excellence: the W.T.C. Environmental Health Center based at Bellevue, which provides screening and treatment to non-responders, and the Mount Sinai Consortium and F.D.N.Y. program, which serve volunteers and first responders. The city expected that the money Congress allocated for non-responders would either go to the Environmental Health Center or go toward creating a new program.

City health officials declined to comment on the impact of losing the federal funding for non-responders. In a tight budget year, many city programs and departments are facing cuts.

Nadler, Rep. Carolyn Maloney and nine other New York members of Congress, including Republican Vito Fossella, wrote a letter to Michael Leavitt, secretary of H.H.S., on May 9, saying the department’s report is a “stall tactic” that ignores Congress’s directives and also ignores the needs of those who are sick because of the W.T.C. attacks.

Prior to taking over H.H.S., Leavitt replaced Christie Whitman at the Environmental Protection Agency, whose response to 9/11 has been widely criticized by scientists as well as Downtown politicians and advocates.

“Studying the problem is the Bush administration’s cover for refusing to commit the resources that Downtown residents, students and office workers are entitled to,” Flynn said. “They’ve heard the evidence. They’ve heard the numbers. They know there’s a problem. They don’t want to take responsibility for the problem.”

Flynn cited testimony from Lorna Thorpe, deputy commissioner of the city Department of Health and Mental Hygiene, to describe the extent of the evidence that non-responders are getting sick. Parents of children enrolled in the W.T.C. Health Registry reported twice the levels of asthma among children under 5, compared to the average in the northeastern United States, Thorpe said at a Congressional hearing March 12.

“That’s a pretty sizable health impact and H.H.S. knows it,” Flynn said. “But the Bush administration sticks with its talking points: The air was safe, the long-delayed lousy cleanup was carried out just to allay the unwarranted anxieties of residents — all that exposure to all that dust and smoke had no impact.”

The federal government’s assertions were so upsetting to Celia Correa, an office worker who links her lung disease to post-9/11 exposure, that she said she did not even know where to begin.

“I can’t believe the federal government is still trying to avoid taking care of people that need medical attention because of being exposed to the 9/11 fallout,” Correa said. “They really don’t give a damn.”

Correa had to quit her job when her respiratory symptoms worsened, leaving her without health insurance. She now receives her healthcare through the Environmental Health Center, but she is concerned that funding for the center will dry up before the need for care ends.

“It’s been almost seven years,” she said. “How much more studying do they need to do?”

Hughes is worried that the government will spend all its time and money studying the problem — leaving few resources to actually solve it. Hughes also does not trust the federal government to be objective.

“They have a financial incentive not to find a correlation [between exposure to W.T.C. toxins and illness],” she said.

It is not clear from the H.H.S. report how much money the department will devote to non-responders this year. The federal government has $185 million in the bank for 9/11-related treatment from previous Congressional allocations, including the $108 million from last December. With the $25 million Bush added in this year, the government has $210 million to spend. That wil
l cover the costs of the first responder program through the end of the next fiscal year, and some of it will go gather data about non-responders, but Babin, the H.H.S. spokesperson, did not know how much.

As it stands now, the federal funding of 9/11 health is a yearly tug-of-war budget negotiation, with no guarantees for the future. To end this cycle, Nadler, Maloney and Fossella wrote the 9/11 Health and Compensation Act. The bill would guarantee care for all those sickened by exposure to 9/11 toxins, including non-responders, and would reopen the 9/11 Victim Compensation Fund.

The bill attracted its 100th sponsor last week, and New York’s delegation is working on getting more sponsors to move the bill forward. Maloney said in a statement that she hopes to pass the bill by the seventh anniversary of 9/11 this fall.

If the federal government is going to provide funding for non-responders within the next fiscal year, they have to get going, said James Melius, an administrator for the New York State Laborers’ Health and Safety Trust Fund who sits on advisory groups for several 9/11 treatment programs. Contracts for services need to go out three to six months before the services are required, he said.

“It seems late to be studying the problem and not providing the money designated for medical monitoring and treatment,” Melius said. “We surely are in need of it.”

The city’s programs for non-responders at Bellevue Hospital, Gouverneur Health Services and Elmhurst Hospital in Queens are seeing steady increases in patients, showing the increasing need for services, Melius said.

“The federal money is critical,” he added. “My concern is that the need and demand for treatment is going to quickly outstrip the capability of [the city] to provide the kind of quality care needed.”
Julie@DowntownExpress.com