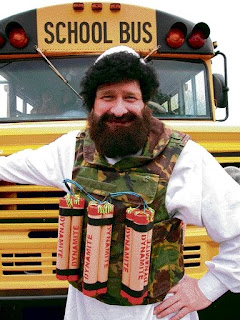 Progressive Review
Mirrored at www.scoop.co.nz
12 MAY 2008

NY TIMES A German graduate student in oceanography at M.I.T. applied to the Transportation Security Administration for a new ID card allowing him to work around ships and docks. What the student, Wilken-Jon von Appen, received in return was a letter that not only turned him down but added an ominous warning from John M. Busch, a security administration official: "I have determined that you pose a security threat."

Similar letters have gone to 5,000 applicants across the country who have at least initially been turned down for a Transportation Worker Identification Credential, an ID card meant to guard against acts of terrorism, agency officials said. The officials also said they were sorry about the language, which they may change in the future, but had no intention of withdrawing letters already sent. . . A British student at M.I.T. who was rejected, Sophie Clayton, 28, said that at first she was amused at what appeared to be a bureaucratic absurdity. But as she pondered the designation, Ms. Clayton said she grew worried. "The two words ‘security threat’ are now in the files next to my name, my photograph and my fingerprints," she said.