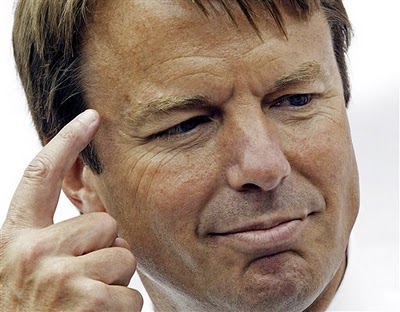 "... An examination of Edwards' campaign finance reports dating back to his first run for the Senate in 1998 also shows contributions from individuals in the insurance industry, tobacco company executives and other corporate interests. All were from individuals; none were from political action committees or other organizations. ... Edwards in 2003 collected $8,000 in contributions from employees of Arthur Andersen. ..."

(CNSNews.com) - John Edwards has tried to set his 2008 presidential candidacy apart from the pack by highlighting poverty and criticizing corporate power, but the North Carolina Democrat in recent years has accepted tens of thousands of dollars in donations from individuals working for the tobacco, pharmaceutical, oil and other sectors.

Last February, Edwards told a crowd of supporters gathered in Washington, D.C., "We have to stop letting the health insurance companies and the big pharmaceutical concerns decide our nation's health care policy."

But in his 2008 presidential campaign, Edwards so far has accepted about $24,000 from officials in the health care industry, including executives from the drug maker Pfizer and the insurance firm Blue Cross Blue Shield. And when he sought the Democratic presidential nomination in 2004, individuals employed by Novartis, Purdue Pharma and other health care and drug firms donated $25,700 to his campaign.

In that same February speech, Edwards went on to say, "It's time we stood up for an energy policy that's not dictated by the profit margins of big oil."

Thus far, oil company executives and employees have donated $8,600 to Edwards' 2008 campaign, according to his first quarterly (Jan.-Mar.) report to the Federal Elections Commission. Of that amount, $2,000 came from engineers, managers and lawyers employed by ExxonMobil.

An examination of Edwards' campaign finance reports dating back to his first run for the Senate in 1998 also shows contributions from individuals in the insurance industry, tobacco company executives and other corporate interests. All were from individuals; none were from political action committees or other organizations.

While rival 2008 contenders in both parties have taken money from various industries, Edwards presents himself as the most populist of the group, railing against corporate power and addressing concerns about poverty in the United States.

The fact that Edwards accepts donations from such sources could cloud his message, said Jon Orman, political science professor at Fairfield University in Fairfield, Conn.

"If he takes money from the same groups he criticizes ... does it disqualify his statements? No. But it does make them suspect," Orman told Cybercast News Service.

"Edwards has been sincere with his 'two-Americas' campaign in both the 2004 campaign and this campaign, talking about equal justice, equal jobs and equal education," he said. "At least he has had the courage to speak out against them [big corporations]."

After losing on a ticket with 2004 Democratic presidential nominee Sen. John Kerry, Edwards has used stump speeches and debate appearances over recent years to press home the "two Americas" theme while laying the groundwork for his latest presidential run.

[Democrats have been promising health care reform for 50 years now ... it never happens. Why? Political campaign contributions from Pharma are the overriding factor. The examples of two prominent Democratic candidates shed light on the cause of the Democratic Party's post-Kennedy era agonies - one threw an election, the other is selling out to corrupt business interests ... ]

"We live in a time where laws can be bought by the highest bidder," Edwards wrote in an op-ed piece posted on a liberal website in January 2006. "Big tobacco, big pharmaceutical companies, big insurance companies, big broadcasters and big oil companies are winning big with this administration and the Republican-controlled Congress.""

Even before running for president, the former North Carolina senator accepted $11,000 in contributions from individuals in the oil industry, including North Carolina-based companies Quality Oil, Lee-Moore Oil and Wicker Oil. And in the 2004 presidential campaign, individuals in the oil industry, including officials from ExxonMobil and Marathon Oil, donated a further total of $11,000 to Edwards.

North Carolina is one of the largest tobacco producing states in the country. In the year following his election to the Senate in 1998, Edwards accepted $10,250 from executives and employees of tobacco companies, including R.J. Reynolds, Phillip Morris and Standard Commercial Tobacco.

Broadcasting figures also are among his list of contributors. For the 2008 campaign, Edwards has accepted $2,300 from Mel Karmazin, the chief executive for Sirius Satellite Radio. In his earlier presidential campaign, he took a $1,000 donation from Norman Pattiz, owner of Westwood Radio, and $250 from Patrick Gibbons, an agent at Clear Channel Entertainment.

In two other noteworthy instances leading up to his first run for the Democratic presidential nomination, Edwards in 2003 collected $8,000 in contributions from employees of Arthur Andersen, accountants for the disgraced energy corporation, Enron; and $4,500 from individuals in the Carlyle Group, a venture capitalist group often scorned by the left.

The Edwards campaign press office did not respond to multiple requests for comment on Tuesday and Wednesday.

It would be difficult to argue that Edwards has been influenced by the donations: He was anything but a reliable pro-business vote in Senate.

Still, the money issue could follow Edwards throughout his latest campaign, said Tripp Baird, a partner with the Republican firm of Watts Consulting in Washington.

"There is certainly a clear and bright line contradicting his campaign rhetoric with his campaign collections," Baird told Cybercast News Service. "It would be like [GOP presidential candidate and Kansas Sen.] Sam Brownback saying 'I'm against abortion' then taking money from NARAL and Planned Parenthood."

That would be an exaggeration, argued Jim Dean, chairman of Democracy for America, a liberal group that supports grassroots participation. Dean, who is the brother of Democratic National Committee chairman Howard Dean, said he doesn't believe the contributions will hurt Edwards among the party base.

"Every candidate has got baggage," Dean told Cybercast News Service. "Edwards is playing by the same rules everybody else is at the end of the day. He is a candidate that has been extremely aggressive about the war and poverty. That doesn't put him in a different fundraising category than anybody else."

But for Common Cause, a liberal government watchdog group, the question of Edwards' donors does underline the need to get "big money" out of politics.

"We need public financing so when people get into office, they are not indebted to these big donors," Common Cause spokeswoman Mary Boyle told Cybercast News Service.

"I can't say that because John Edwards or anyone else takes money from pharmaceuticals that he is pro-pharma," she said. "But it's better if it's out of the process. When you look at the record, the question is always asked -- and rightfully so -- did he vote for this because of the donations?"