Jesse Helms and the FBI 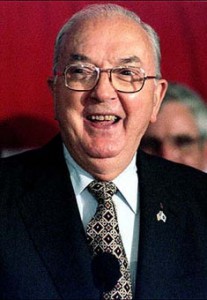 RALEIGH, N.C. — U.S. Senator Jesse Helms curried favor with the FBI and director J. Edgar Hoover before starting his 30-year political life as a conservative icon, then occasionally called on the bureau for information and investigations, newly released records showed.

The FBI file on Helms, a polarizing figure who actively fought against the civil rights movement, was comprised mostly of agents investigating death threats, according to more than 1,500 pages released to The Associated Press under a Freedom of Information Act request. Helms died July 4, 2008.

"All senators and congressmen get threats periodically. Most of it's not serious," said Jesse Helms Center director John Dodd, who began working as a political consultant for Helms in the early 1980s. "It certainly wasn't something he talked about much."

The threats came from gay rights activists, supporters of an indoor smoking ban, and many others who expressed no cause. One man carried a hit list and a .357 Magnum handgun into a 1991 Senate hearing, though documents indicated Helms wasn't the primary target of a man out to "penalize" lawmakers for the expulsion of State Department personnel from Moscow.

More than a year before Helms won his Senate seat in 1972, a memo to Hoover described how the Raleigh television executive staunchly backed Hoover. Helms and Hoover shared a fight against Communism in the U.S. and a hostility toward the Rev. Martin Luther King Jr., and Helms often conveyed his message in editorials on the television station.

Helms offered the station's resources to help the FBI any time. The files do not indicate whether the FBI took up Helms' offer.

Helms asked the FBI to investigate in 1974 to see if an aide broke any laws by selling a pair of mailing lists of political donors compiled while Helms was running for office. The FBI found the lists weren't government property and didn't investigate.

Helms also asked for a probe in 1986 of whether U.S. intelligence agents were spying on him during a trip to Chile, and asked that FBI agents find out who talked to the New York Times for a report that the bureau was investigating whether Helms or one of his aides passed sensitive information to the government of military dictator Augusto Pinochet.

Helms accused the State Department and the Central Intelligence Agency of working to discredit him.

Clifford Kiracofe, then a foreign policy aide who accompanied Helms on that 1986 trip to Chile, said he didn't know if Helms ever got a satisfactory answer from the FBI, and the documents don't mention it.

"The senator's and the office's reaction was that was a fallacious allegation and how did it get into the press?" said Kiracofe, who now teaches at Virginia Military Institute and Washington and Lee University. "We were always under attack in the press. Helms was an extremely controversial senator and there were a lot of allegations that were proved untrue."