This will surely have you falling down with surprise. According to documents released under the Freedom of Information Act and obtained by the (UK) Sunday Telegraph, the August 2009 release from Scotland’s Barlinnie jail of Libyan Abdelbaset al- Megrahi, accused of the bombing of  Pan Am flight 103 over Lockerbie, Scotland in December 1988, hinged on an oil and arms deal, allegedly brokered by roving war monger (sorry, roving “Peace Ambassador”) Tony Blair.

At this point it should be said that anyone who has read John Ashton and Ian Ferguson’s meticulous “Cover up of Convenience” (i) on the Lockerbie tragedy could only regard Mr al-Meghrahi’s conviction as between very unsafe and very questionable.

The British Labour Party, which Blair headed for ten years, until 27th June 2007, have always insisted that the release had no connection with commercial deals. After leaving Downing Street, Blair visited Libya some six times.

On 8th June 2008, the then British Ambassador to Libya, Sir Vincent Fean, sent Tony Blair’s private office a thirteen hundred word briefing on the UK’s eagerness to do business with Libya, according to the Telegraph. (ii) Blair flew to Tripoli to meet Colonel Quaddafi, just two days later, June 10th. Quaddafi paid: Blair, always lavish with other’s money had requested, and was granted, the Colonel’s private jet for the journey.

Sir Vincent’s “key objective” was for: “Libya to invest its £80 billion sovereign wealth through the City of London”, according to the Telegraph, which also cites the Ambassador writing of the UK being : “privately critical of then President George Bush for ‘shooting the US in the foot’ by continuing to put a block on Libyan assets in America, in the process scuppering business deals.” Britain however, was voraciously scrambling to fill the fiscal gap.

Unlike the US and UK who abandon or drone to death their own citizens who are in trouble, or even accused of it, Libya’s Administration had stood by their man and seemed to be prepared to do even unpalatable deals to free him and had long been pressuring the UK to release al-Megrahi.

In May 2007, a month before he left Downing Street, Blair had made his second visit to Libya, meeting Colonel Quaddafi and his Prime Minister Al Baghdadi Ali al-Mahmoudi in then beautiful and now near ruined city of Sirte.

Surely coincidentally, on this trip, a deal was seemingly thrashed out, including prisoner transfer, just before British Petrolium (BP) announced their approximate £454 million investment to prospect for £13billion worth of oil in Libya.

Also, states the Telegraph report: “At that meeting, according to Sir Vincent’s email, Mr Blair and Mr Al Baghdadi agreed that Libya would buy a missile defence system from MBDA – a weapons manufacturer part-owned by Britains’s  BAE Systems.” This seemed to (also) hinge on a Memorandum of Understanding for a Prisoner Transfer Agreement: “which the Libyans believed would pave the way for al-Megrahi’s release.” Various sources state that the arms deal was worth £400 million, and up to two thousand jobs in the UK. Sir Vincent referred to the arms deal as a “legacy issue.” Blair’s “legacy”, as ever, synonymous with destruction.

Ironically, it was Blair who credited himself with persuading Colonel Quaddafi to abandon and destroy his weapons programmes  after his visit to the country in March 2004 (placing that Judas kiss  the Colonel’s cheek) as a step to Libya returning to the fold of the duplicitous “international community.” With friends like Blair, enemies are a redundancy.

When Blair returned to Libya in June 2008, the Telegraph contends that the British Government, then under Gordon Brown, Blair’s former Chancellor of the Exchequer (who left the national coffers near empty) used the opportunity: ” to press the case for the arms deal to be sealed. At the time, Britain was on the brink of an economic and banking crisis – and Libya, though the Libyan Investment Authority – had billions of pounds in reserves.”

Saif al-Islam, Quaddafi’s son, expressed the concern over the arms deal being voiced from within the Libyan military, given their close ties to the “Russian defence equipment camp.”

An earlier discovery by the Sunday Telegraph shows, in letters and emails, that Blair held hitherto undisclosed talks with the Colonel in April 2009, four months before al-Megrahi’s release. (iii)

Again he was flown at the expense of the Colonel, in his private jet: “In both 2008 and 2009, documents show Mr Blair negotiated to fly to the Libyan capitol … in a jet provided by Quaddafi.” Blair’s Office denies the claims, saying they were transported in a Libyan government ‘plane.

By the time of the 2009 visit: “Libya was threatening to cut all business links if al-Megrahi stayed in a British jail.” Blair seemingly attempted to pour oil on troubled waters by bringing American billionaire, Tim Collins to that meeting to advise Quaddafi on building the beach resorts he was planning, on the Libyan coast.

Further adding to the murk, a spokesperson for Collins stated:”Tim was asked to go by Tony Blair in his position as a trustee of Mr Blair’s US faith foundation. Tim had no intention of doing any business with Quaddafi.”

However: “Sources in Libya said Quaddafi had discussed with Mr Collins opening beach resorts along the Libyan coast, but that Mr Collins had dismissed the idea because the Libyans would not sanction the sale of alcohol or gambling at the resorts.

Blair’s spokesperson said of the visit: ” … Tony Blair has never had any role, either formal or informal, paid or unpaid, with the Libyan Investment Authority or the Government of Libya and he has no commercial relationship with any Libyan company or entity.” A Blair first, seemingly, given the impression that he never touches down anywhere without emerging with a lucrative contract or a large cheque,

However, Oliver Miles, a former British ambassador to Libya, is quoted as saying : “Mr Blair is clearly using his Downing Street contacts to further his business interests.”

In a further coincidence, the Prisoner Transfer agreement for Mr al-Megrahi was signed the day before Blair’s 2009 visit.

When al-Megrahi, who had been diagnosed with terminal cancer, was released in August 2009, the British media and politicians were outraged. Scotland had done a deal and was benefiting financially from Libya. The latest revelations prove Scotland did no financial deals. When Mr al-Megrahi failed to die, politicians and media were even more outraged. They were a shaming spectacle.

Mental mind set can be a huge force in prolonging life in even the most serious cancer patients. No doubt in al-Megrahi’s case, being back in a home and with a family he loved contributed to his extra time. He survived long enough to see his country destroyed by the devious forces the West embodies – and at which Blair excels.  Megrahi died in September 2012.

Incidentally, Ambassador Fean reportedly “expressed relief” at al-Megrahi’s release: “He noted that a refusal of Megrahi’s request could have had disastrous implications for British interests in Libya. ‘They could have cut us off at the knees.”(iv)

Footnote: The 2004 visit by Blair was arranged by Saif al Islam, who Blair seemingly knew well and had allegedly even offered suggestions on his PhD thesis when Saif was studying at the London School of Oriental and.African Studies (SOAS.)

In September last year Saif al-Islam’s lady friend of six years, appealed, passionately, to Blair to intervene to save the life of his now captured, maimed and death penalty-facing friend: “The two are old friends – it is time that Mr Blair returned some loyalty. Mr Blair is a man of God – as a Christian he has a moral duty to help a friend in need”, she has commented. (v)

Seemingly there has been no response from Blair’s office. Further, an extensive search for a comment on the appalling death of  Colonel Quaddafi – his former host and private ‘plane provider – and the demise of much of his family from this “Peace Envoy” and “man of God”, has come up with absolutely nothing.

To mangle a quote: Beware of British offering deals. 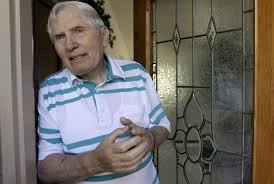