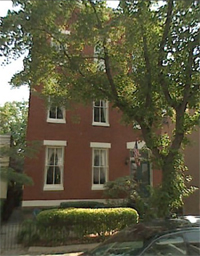 The latest bombshell about the congressional Christianists’ residence and meeting house on Washington’s C Street comes in the form of a lawsuit in which the soon-to-be ex-wife of former Rep. Chip Pickering (R-Miss.) is suing his alleged longtime mistress, Elizabeth Creekmore Byrd, for alienation of affection.

If you are keeping score, Pickering the third philandering Christian extremist politician connected with the C Street house to be outed as an adulterer in the last few weeks. The others are Sen. John Ensign (R-Nev.) and Gov. Mark Sanford (R-S.C.). Sen. Tom Coburn (R-Okla.), who is also a C Street resident, has also been mentioned in the scandals. It was allegedly he who counseled Ensign to arrange payments to the family of Ensign’s former mistress.

The house was profiled in the Washington Post on June 26:

On any given day, the rowhouse at 133 C St. SE — well appointed, with American flag flying, white-and-green-trimmed windows and a pleasant garden — fills with talk of power and the Lord. At least five congressmen live there, quietly renting upstairs rooms from an organization affiliated with “the Fellowship,” the obsessively secretive Arlington spiritual group that organizes the National Day of Prayer breakfast, an event routinely attended by legions of top government officials. Other politicians come to the house for group spirituality sessions, prayer meetings or to simply share their troubles…

Sanford was a frequent visitor but did not live in the house during his term in Congress — he saved money by living in his office.

Chip Pickering’s voting record hewed to the right-wing extreme of the “family values” line. He voted for constitutional amendments banning same-sex marriage in 2006 and 2004, and for a ban on gay adoptions in the District of Columbia in 1999. Other glaring hypocrisies in his record include:

- While engaged in the affair with Creekmore Byrd, Pickering said of President Bill Clinton: “I think for the good of the country and the good of his own family it would be better for him to resign. When someone puts himself forward for public office, then his personal conduct does become relevant.” [Washington Times, 8/20/98]

- Pickering explained his support of a constitutional gay marriage ban, stating: “Marriage as an institution between one man and one woman promotes the best interest of the husband and wife, and the best interests of children.” [Mississippi Link, 7/20/06]

If the name Pickering rings a bell, Chip’s father, Charles Pickering was the Mississippi judge whose nomination to the Fifth Circuit Court of Appeals by George W. Bush was quashed by Democrats on the Senate Judiciary Committee over allegations that Pickering had allowed racist views to affect his actions on the bench.

In 2007, Chip Pickering was on Mississippi Gov. Haley Barbour’s short list to replace Sen. Trent Lott when Lott announced he was leaving the Senate to work as a lobbyist. On August 16, Pickering announced that he was leaving Congress, in part, he said, to spend more time with his family. In her suit, Leisha Pickering alleges that Pickering turned down the Senate seat because of his affair:

[The] congressman turned it down after [Creekmore Byrd] “insisted” that their relationship could not continue if he accepted the seat, as he would have to stay married for public appearances. She allegedly gave him an ultimatum, and he chose her.

Pickering filed for divorce in June 2008. He now works for a telecom company owned by Creekmore Byrd’s family.