By Joseph CUMMINS  (Translated from Spanish) 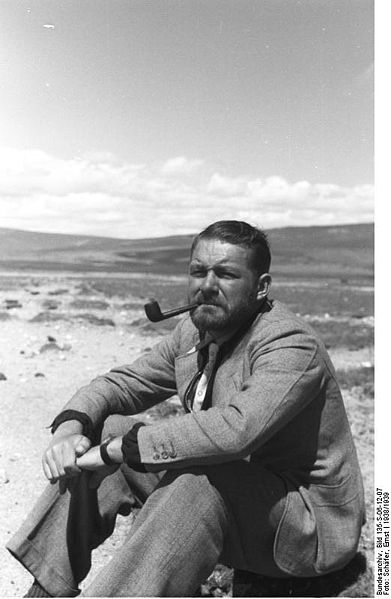 The racial theories of Hitler and Himmler took Ernst Schafer to the Himalayas in search of the origins of the Aryan race.

"Ethnic cleaning” has become a phrase widely used to describe the destruction of a populace  to “purify” racial lineage. But many people are unaware of the hidden origins of Nazi racial philosophy, the mystical theory of a race of soldiers of clear skin that existed once in the frozen immensity of the Himalayas. These “Aryans” (a word derived from the sanskrit term arya, or “nobleman”) were, following legend, survivors of a series of floods and ice ages, even superhuman soldiers; these would have spread across the earth and founded the great civilizations of the world, eg. Sumeria and Persia.

All of this is nonsense, but men like Adolf Hitler and the founder of the SS, Heinrich Himmler, took it very seriously. So much so that in 1938 Himmler, the instigator of the “Final Solution”, sent a scientific expedition to Tibet to find the tracks of the superior race.   Himmler and occultism   The occultic beliefs of the Nazis drew on a mix of sources. Many Nazis were members of the proto-fascist Thule Society, founded on 1910, named for the mythical northern territory of Hiperbórea-Thule, first mentioned by Heróditos, supposedly located in the far north. The Thule Society thought that Germans were descended from the inhabitants of Thule who had migrated towards the south, that they were destined to become the superior race and rule to the world (German philosopher Friedrich Nietzsche began its book of 1895, “the Antichrist”, with these words: “Mirémonos to the face. We are hiperbóreos”). (...)   These threads of occult history converged in 1935 when Himmler, with the approval of Adolf Hitler, founded the Ahnenerbe, the “Society of the Ancestral Inheritance”, dedicated to the study of the roots of the Aryan race. The majority of the world, even a great number of German and some Nazis, did not believe in the concept of an Aryan race.   But Himmler did, and he wanted to demonstrate the truth of his theories, elaborating a complete history of the Aryans, as well as a geography. And he wanted to do it in a scientific way so nobody could question the veracity of his historical claims. So he resorted to anthropologists like Hans Günther, who, after carrying out field work  involving thousands of anthropological measurements in towns of Europe and Asia (heads, noses, lips, ears … ) he believed that the pure race existed. (...) Himmler began to send  small groups of Nazi scientists to search for signs of Aryan origins. These expeditions were as much in the North Pole as in the South Pole, also Greece, cradle of  European civilization, where Himmler hoped to find indications of an Aryan past.   But the most ambitious expedition wa to Tibet in 1938, led by one of the more promising scientific young people of the Third Reich: Ernst Schafer.   Ernst Schafer, who died in 1992, is a mysterious and complex figure. He was an explorer who in 25 years had made two expeditions to Tibet during a period in which the country was decidedly a dangerous place to visit - with abundant banditry, feudal battles and skirmishes between the armies of Chiang Kai-shek and Mao Zedong. He was also a naturalist, a brilliant zoologist and ornithologist. Nevertheless, he liked to drink the fresh blood of the animal that he killed, and always took with him a weapon everywhere he went, a persistence that would lead to  tragedy.   And although later he affirmed that he did not share the Nazi belief in a superior race, that he was simply an enthusiastic German nationalist, he joined the SS of he own will. He assisted Himmler in promoting the ideology of the Third Reich.   Schafer was born in Colony to a wealthy family in 1910. He was a born hunter who took to killing rats in the cellar of his house. Many budding youn scientists have been known to display embalmbed lab animals in their rooms, but Schafer's faimly did not approve of his custom of cutting off the tails of mice. When he was 12, he was sent off to a boarding school.   The school's director took students  to the forest and dropped them off without food or water for twenty-four hours. Unlike many of the children, Schafer thrived in the wild. 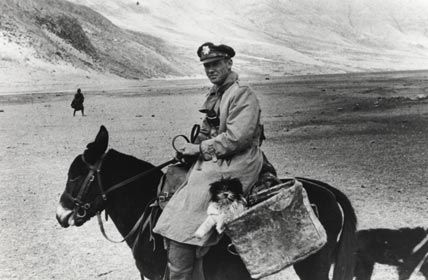 In 1930, he befriended a rich American and his life changed completely. Brooke Dolan was son of a wealthy family in Philadelphia. Dolan traveled to Germany to recruit hunters for an expedition to the wild border zone between China and the Tibet to search for evidence of the ancient mystical supermen. Along with other naturalists and hunters, Dolan and Schafer traveled to China in the autumn of 1931, initiated an incredible expedition on the Yangtzé river, and travelled on to the west, towards Tibet. (...)

Schafer saw the Buddhist flags of oration, omnipresent in Tibet, displaying the swastika. It was a traditional symbol of good fortune in old civilizations from India to the American southwest. In Germany, it was used for the first time as the emblem of a neopagan movement at the end of the 19th century. The Thule Society adopted it as its official symbol, and at the beginning of the 1920s the Nazis did, as well.   From Great Unknown Episodes of History Author: Joseph Cummins. He publishes: Planet. Date of publication: 4 of March of 2010.   http://www.larazon.es/noticia/2277-avance-editorial-nazis-en-el-tibet
Login
0 Comments

Hitler as Art Director: What the Nazis’ Style Guide Says About the “Power of Design”

Raelian Cult Wants to Rehab `Reputation’ of the Swastika

The Nazi Connection to Shambhala and Tibet