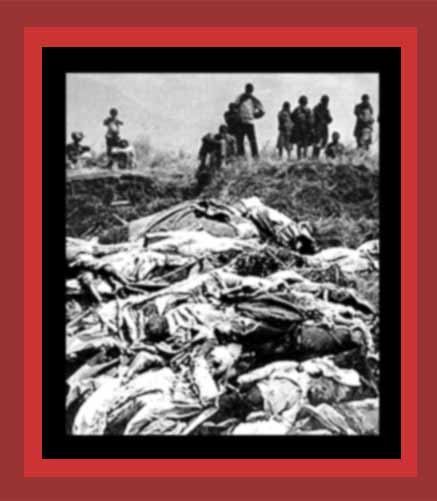 These days, a great many Americans know that Fox News heavyweight Glenn Beck's nightly rhetoric is silly, frequently factually incorrect, and, most of all, melodramatic. In fact, as of late, even other Fox staffers have started turning on the blubbering simp. Still, few people seem to be discussing how, given the right circumstances, a person like Beck can go from laughable clown to dangerous threat almost overnight.

I've often thought Beck's fearmongering was a bit troubling, but I didn't realize just how troubling until this weekend, when I compared it to some RTLM transcripts.

For those who don't know, RTLM, or Radio-Télévision Libre des Milles Collines, was the propaganda station used to broadcast vicious hate propaganda during the Rwandan genocide. Staffed exclusively by Hutus, the RTLM's "news" briefs were bad enough that foreign governments considered jamming the station's signal in order to mitigate the Tutsi massacre. Ultimately, they didn't, for fear of being branded as censors, leaving hundreds of thousands of Tutsis to be slaughtered.

Not shutting down the Hutu hate speech when the chance presented itself is regrettable. Today, seeing how strikingly similar Beck's nonsense is to some RTLM transcripts, I can't help but wonder if we'll eventually also regret giving him airtime.

RTLM: "It is not only today that the [Tutsis] want to take and monopolize power in order to oppress the Hutus and cast democracy out of the window; the Batutsis' superiority complex has been around for a very long time. ... It is this superiority complex which set the Tutsis apart because, even today, many of them are still convinced of their intellectual superiority to the rest of the Rwandans."

RTLM: "The [Tutsis] ... are wicked and a wicked person always finds a way of performing evil arts."

Glenn Beck: "I know who our czars are now. And this collection of these czars, these are evil people. These are wicked, crazy, frightening people."

RTLM: "When you look at them, you wonder what kind of people they are. In any case, let us simply stand firm and exterminate them..."

Glenn Beck: "There's a time for everything. To every purpose, there is a season. And let me tell you, today the season is clubbing people over the head with shovels.

Glenn Beck: "I think this is a sign that the government won't think twice before they jam their fangs into your neck. ... These bloodsucker vampires are not going to be satisfied with just sucking the blood out of GM's top guy, the AIG executives or any other business or businessperson. Their thirst for power and control is unquenchable. They will not stop. There's only two ways for this movie to end: Either the economy becomes like the walking dead, or you drive a stake through the heart of the bloodsuckers.

RTLM: "We then ask you seriously to help us and work with us on discovering and protesting against anyone who would still have evil plans of bringing us back to a worse situation. ... give information to the soldiers, and all those who are in charge of security...

RTLM: "This has been diffused by journalists of Radio France Internationale, who serve as [Tutsi] tools. The wish of these white men is that the preferred race, by God, must rule Rwanda.

RTLM: "[P]eople from Uganda, Burundi and elsewhere ... instead of coming in peace, they steal our country, they destroy it. Therefore, let us get up and fight for Rwanda.

Glenn Beck: "As for Fox, they only seem biased compared to the one-sided reporting of NBC, ABC, CBS and especially MSNBC. The fact is, I don't know of ANY lies Fox News has told. Fox gives both sides of the argument of virtually every issue."