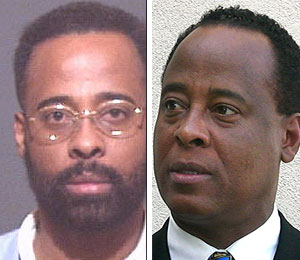 ... In the wake of the investigation, a slew of liens and lawsuits against Murray has emerged. In the last three years, Murray has faced lawsuits for unpaid business bills totaling over $700,000, including rent on his medical offices. He also owes more than $13,000 in child support, $70,000 to a business partner with whom he launched an energy drink called Pitbull, and he failed to pay more than $71,000 worth of student loans from medical school.

Murray was also charged with domestic violence in February 1994 while undergoing a cardiology fellowship at the University of Arizona at Tucson. He stood trial in July of that year and was ultimately acquitted. ...

Murray didn't set out to be a doctor to the stars. He was born on the Carribean island of Grenada in in 1953. He was raised by his mother in neighboring Trinidad. She never married his father, Dr. Rawle Andrews, a renowned physician in Houston, Texas.

But while he was revered by his patients, Andrews, now deceased, came under scrutiny late in his career, foreshadowing the problems currently plaguing his son. Andrews had his medical license restricted by the board in 1994 for prescribing "controlled substances and substances with addictive potential" to two patients for "extended periods of time without adequate indication," according to documents obtained by ABCNews.com.

Murray's attorney's spokeswoman, Miranda Sevcik, said that any wrongdoing of Murray's father has nothing to do with the son's predicament.

"This is not relevant to Dr. Murray or the investigation into Michael's death," Sevcik said.

She added that Murray, in 20 years of practicing medicine, has never had his license suspended or a malpractice claim filed against him. ...

Michael Jackson's doctor has had a previous run-in with the law. Dr. Conrad Murray, who could face manslaughter charges in Jackson's death, was arrested in 1994. Murray was arrested on domestic violence charges in Arizona. The police report alleges Murray threw his then-girlfriend to the ground as their baby sat on the floor crying. ...

Former prosecutor Marcia Clark revealed on Larry King Live last night that the report is finished, and is being held up by the LAPD. "It's actually done," Marcia said. "It's ready to go, but Chief Bratton is not in town. They're sitting on it 'til he gets back from his vacation next week."

The Jackson clan has reportedly seen the completed report. ...

... Radar has learned that Murray has been sentenced to jail on two different occasions. And one of them was just a couple months ago!

According to the report, Murray was sentenced to jail on April 29th, 2009 for failing to pay child support. He was also sentenced in 2007 for non-payment of child support in connection with a son he fathered in California with a woman named Nenita Malibiran. On both occasions, the doctor was able to get out of doing any time by paying up. ...

Sounds like Dr. Conrad Murray has some skeletons in his closet—not only having to do with the Michael Jackson investigation, but in his personal life as well!