41st and Central: The Untold Story of the L.A. Black Panthers - The Constantine Report
0 SHARES

Assassinations » 41st and Central: The Untold Story of the L.A. Black Panthers

Listen to this segment | the entire program 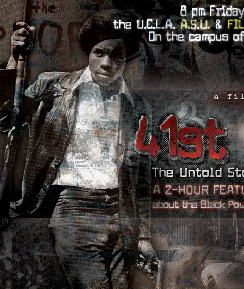 In the 1940s, the grandchildren of slaves began migrating from southern states to Los Angeles in search of a refuge from racism, only to be greeted by more racism. With crosses burning in Inglewood and Culver city as late as the 1960s, and a militant police force led by Chief William Parker that drew support from the FBI and recruited officers from the South, Los Angeles was not the bastion of freedom African Americans had hoped it would be.

Enter the Black Panthers. 41st and Central, a new documentary written, produced, and directed by Gregory “G. Bone” Everett, himself son of a black panther, traces the history of the Southern California chapter of the Black Panther party from its inception to its demise. The film explores the Party’s face-offs with the LAPD and the Us Organization, a rival group, as well as the UCLA killings of the charismatic Alprentice “Bunchy” Carter and John Huggins, and the 1969 shootout between the LAPD and the Black Panthers on 41st Street and Central.

A Limited One Week Engagements Beginning at March 26th