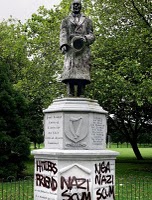 Sad to say, it’s a telling sign that when a statue to a Nazi collaborator goes up in Dublin, the least that happens is a splash of emulsion. Can you imagine if a statue to Marshal Pétain were erected in Paris? Or one to Quisling in Oslo? Or even of Mussolini in Italy?

SINN Féin have a way of testing everyone’s patience. If asked "do you condemn attacks on property?", I suspect 99% of us would say "yes". But when that attack amounts to spray-painting a monument to a Nazi collaborator? Now that’s a difficult one.

Would I succumb to the temptation to do it myself? Certainly not.

Would I encourage someone else to do it? Emphatically, no.

But, if I were a judge, would I fine or jail someone for doing it? Errr...

Yes, not for the first time, the Seán Russell statue in Dublin has been vandalised, just weeks after the latest version was unveiled with much pomp by the spuriously official-sounding National Graves Association (NGA).

Some very naughty person has painted "Hitler’s friend" on the statue. For some reason, republicans from the Provo tradition sound surprised. "There seems to be some group in the area who are hellbent on destroying it," Cllr Christy Burke was quoted as saying.

I wonder why that might be, Christy? He now wants CCTV cameras trained on the site in Fairview Park. I wondered why Burke resigned from Sinn Féin last month. Now we might have a clue: unlike Sinn Féin, he supports CCTV cameras to combat crime. Or maybe he just supports them when it’s the "desecration" of the republican holy of holies? Perhaps he’ll write in and let us know.

According to Burke, all these attacks are "costing the NGA a lot of money". If you do write in, Christy, maybe you could explain where all this money came from in the first place? Otherwise, we’ll be forced to draw our own conclusions.

And while you’re at it, could we have a clear condemnation of those who scrawl "IRA" on roads and walls, and splatter propagandist murals on the sides of people’s houses for them, without being asked?

I know, I know: I’m in danger of sounding facetious. But if Provo types, even recently resigned ones, don’t understand what all the fuss is about, they live in smaller bubbles than we thought.

To recap on the history for a moment... Seán Russell was the leader of the IRA who declared war on Britain in 1939 and launched a bombing campaign in British cities, complementing that of the Luftwaffe. The IRA campaign claimed seven dead and almost 200 wounded, the vast, vast majority of them civilians.

Using the novelist Francis Stuart as an emissary, the IRA had opened up contact with the Abwehr, the military-controlled German foreign intelligence service. Twelve Abwehr agents landed in the Free State between 1939 and 1943, aiming to make contact with the IRA and develop plans for joint action in the North.

Éamon de Valera responded swiftly to this direct threat to his pledge that Ireland would not be used as a base for attacks on Britain and introduced the Offences Against the State Act. Several imprisoned IRA men went on hunger strike in response and rather than see them die, de Valera released some.

Sensing weakness, the IRA launched a raid on the Irish army’s munitions store in Phoenix Park. Having learned his lesson, de Valera warned the IRA that Easter Rising veterans or not, such activities would not be tolerated. The IRA, in turn, started referring to him as "Judas".

That brief summary would probably not be contested, even by Christy Burke or Larry O’Toole, the leader of the Sinn Féin group on Dublin City Council, who laid a wreath at the recent unveiling, although Sinn Féin/NGA representatives sometimes overlook the dead and wounded, preferring to stress the attacks in Britain were aimed at telecommunications installations.

The real question is, though, was Russell justified? From a Provo point of view, there is no question: "England’s difficulty was Ireland’s opportunity", as Matt Doyle of the NGA puts it. Besides, Russell wasn’t involved in sending Jews to death camps or anything (although his convenient death from a burst stomach ulcer in 1940 on board a Nazi U-boat — followed by burial complete with swastika and German military honours — means we can only speculate how far he would have taken his alliance with the Führer).

If it was quite as simple as that, many nationally-minded people might be tempted to shrug. It does beg the question, though, why invest all those euro in a massive bronze statue to the man? (It’s "a significant work of art", you know, with a GPS tracking device in its head, apparently). The war on Britain was, after all, a pathetic failure.

As another NGA apologist puts it delicately, "the campaign ran itself into the ground long before any tangible republican objectives could be secured".

Whether or not Russell was actually doctrinally a Nazi is debatable. What is known from several accounts of people then in the IRA was that Nazi sympathies were strong in republican circles. When news of German victories came through on the radio in Crumlin Road jail in Belfast, the IRA prisoners cheered to the rafters.

But for most people, it was very possible to seek an end to partition, support Irish neutrality in the Second World War and still have been able to see that Irish issues paled beside those at stake when the free world was fighting for its very survival.

For the NGA to point out that Russell also sought aid from the Soviet Union a decade earlier and argue, on that basis, that he couldn’t have been a fascist only reveals another truth: that Seán Russell was a complete fanatic with a very strange set of priorities. Moreover, he was a fool if he thought Hitler would conquer Britain and turn it into a German colony but leave little Ireland blissfully alone to go its own sweet way.

NOW it is true that all sorts of people — not least those living under the yoke of the 20th century’s other monstrous ideology, Marxist-Leninism — formed tactical alliances with Nazi Germany. But when those people are honoured, it’s cause for most of Europe to demand their political descendents be banned.

Sad to say, it’s a telling sign that when a statue to a Nazi collaborator goes up in Dublin, the least that happens is a splash of emulsion. Can you imagine if a statue to Marshal Pétain were erected in Paris? Or one to Quisling in Oslo? Or even of Mussolini in Italy?

Couldn’t a superficially cogent argument be made that these men too were not Nazis in the strictest sense, but merely entered alliances with Hitler for the greater good of their homelands? But wouldn’t such arguments be met by riots in the streets?

Needless to say, I condemn rioting too, but why is it that Dublin’s dirty little secret — or should that be Dublin City Council’s little secret, for the park where the Russell statue stands belongs to them? — isn’tbeing raised in the Dáil, in Brussels and beyond? In a society that extols human equality, officially despises antisemitism, holds gay and straight people, black and white people to be fundamentally worthy of respect, why has the very existence of a monument to Nazi collaboration not been questioned by anyone higher up the political pecking order than local councillors from Fine Gael and Labour?

Seán Russell is a disgrace, but so is the omerta sometimes from people who, in their heart of hearts, know better.

This story appeared in the printed version of the Irish Examiner Wednesday, July 15, 2009