Daryl Davis A Black Man Amidst the Klan Daryl Davis, in person and on screen. Photo by Allison Cahoon

Although Daryl Davis has won a Grammy and played piano in Chuck Berry’s band, his most notable accomplishment has nothing to do with music (although he sometimes lights his keyboard on fire while playing it). His claim to fame is utterly improbable; he is a black man with friends in the Ku Klux Klan. On Wednesday, Davis shared his story with students in Blaustein Humanities Center.

Davis’ story began at a Boy Scout parade in 1968, when he was pelted with bottles and rocks while marching with his troop. He had never experienced racism before because most of his childhood was spent in Europe, where multiculturalism was “normalcy.”

“I did not realize I was the only one getting hit. When they told me why I was getting hit, I did not believe them. From then on, I wanted to know about anyone who felt their skin color gave them superiority,” Davis recalled. 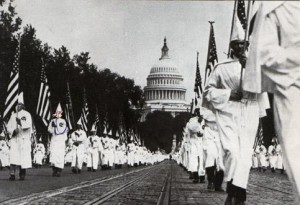 Another powerful incident occurred in a high school class on Twentieth Century Problems, when two guest speakers—members of the American Nazi Party—told Davis he should be shipped back to Africa.

As a result of these clashes, his interest in racism grew. At the same time, his musical career took off, and he played witha variety of artists, including Chuck Berry, Muddy Waters and a jam session with Bill Clinton. But his gigs brought him back to his fascination with race relations.

One night in 1983, while resting between sets at an all-white truck stop in Frederick, Maryland, a man struck up a conversation with Davis. The man turned out to be a Klan member, but the two men connected over music and kept in touch. Davis invited him to his gigs, and the Klansman attended.

“He wanted to show his buddies the black guy that could play like Jerry Lee Lewis.”

Around this time, Davis began to write a book about racism and hate groups, titled Klandestine Relations: A Black Man’s Odyssey in the Ku Klux Klan. He used his inroad with the Klansman to interview the state leader of the Klan, Roger Kelly—the Grand Dragon of Maryland.

The Klansman warned Davis that Kelly might kill him, but aside from a few tense moments during the three-hour interview, Kelly and Davis developed a mutual respect. Eventually they became friends. Kelly brought Davis to Klan rallies, providing him more material for his book. Davis helped Kelly quit the Klan.

Davis’ story made headlines in the late 1990s, and he has been on a fixture on the college lecture circuit ever since. His message to students is simple.

Although some detractors have cast him as an “Uncle Tom,” Davis stands by his methods.

“I have Klan robes and hoods hanging in my closet, given to me voluntarily by members who have quit the Klan since coming to know me. That’s what I’ve done to improve race relations. How many robes and hoods have you received as a result of your methods?” •