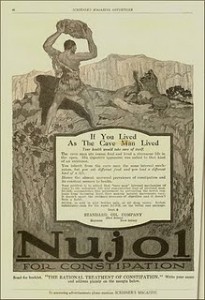 by Morris A. Bealle

Thirty years ago the Standard Oil Company became impressed with the methods of the big packing houses which used, processed and sold every part of the hog but the squeal.

Their sales research department went ‘way back to the 1860’s when “Old Bill” Rockefeller, the itinerant pappy of John D. (the first) and a patent medicine showman, used to palm off bottled raw petroleum on the yokels as a cure for cancer.

“Old Bill” was an upstate New York farmer, until 1850. He moved to Cleveland then, entered the patent medicine racket and had himself listed as a “physician” in the city directory. In selling raw petroleum in a pretty bottle “Old Bill” did nothing new.

He merely took a page out of the book of other patent medicine fakers who were then hawking their wares from the backs of wagons – covered and uncovered. When oil was discovered in northwest Pennsylvania (1850) the jackals of the oil trade found there was more gold in the jeans of the gullible yokels than there was in working for it in the oil fields.

They began to bottle the raw petroleum and palm it off under various names as a cure for everything under the sun. The popular maladies of the day were liver complaint, cholera morbus, consumption and bronchitis. Among the names given this raw petroleum were “Seneca Oil", “Rock Oil” and “American Medicinal Oil”.

“Old Bill” opened up a new field for himself. He called his bottled petroleum “Nujol” (meaning new oil) and sold it to those who had cancer and those whom he could make fear they would have it.

This sounded good to Standard’s researchists. It sounded even better when they found it cost but $2.00 a barrel to concoct Nujol from crude petroleum. And that from one barrel of the raw stuff they could make 1,000 six-ounce bottles of finished Nujol. Instead of calling it a cure for cancer they called it a cure for constipation.

The latest trade catalog lists Nujol as going to the druggist at 28-2/3 cents a half pint (8 fluid ounces). The druggist thus pays about 21 cents for a 6-ounce bottle of Nujol which costs Standard Oil 1/5 of a cent.

These breath-taking profits from Nujol make it inevitable that America’s largest and most ruthless industrial combine (the Rockefeller Empire) should soon add the drug traffic to its already vast production and sales domain. It wasn’t until 1939, however, that the Drug Trust was formed and the upward curve in their drug profits began to assume the present gigantic proportions which today make it a macabre $10,000,000,000 a year business. How the American Drug Trust was formed by an alliance with its opposite number in Germany is almost a story in itself.

Soon after the present-day Nujol was put on the market it was discovered by physicians to be harmful. It robbed the body of fat soluble vitamins and caused serious deficiency diseases. Standard Oil checked the loss in sales by adding carotene (one of the fat soluble vitamins) to Nujol and claiming this overcame these injuries. Physicians disagree with the sales department of Standard Oil on this point.

And what of Nujol, now being sold to the public as a laxative. For some uyears before his death Senator Royal S. Copeland of New York used to set up a radio microphone every morning in his Senate Office Building quarters in Washington, furnished by the American taxpayers, and plug this greasy concoction – at $75,000 a year.

The New York Senator was a doctor of sorts. Although he possessed a medical degree he was never able to make a living as a bedside practitioner. He went into politics and made medicine pay in a big way. First he became a health commissioner of New York City, then a Senator from the Empire State where he used the prominence thus gained to ballyhoo Nujol to unsuspecting radio listeners.

Today Nujol is made by Stanco, Incorporated, 216 West 14th Street in New York, listed in Moody’s Manual as one of the many subsidiaries of the Standard Oil Company. Stanco’s only other product is Flit, well known fly killer and insecticide, made from the same raw materials and by pretty much the same process. 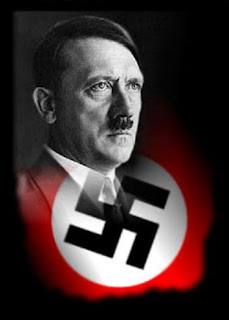 When a German beer hall bum named Hitler began to plan his 1,000-year Reich, the powers-that-were in Germany didn’t actually know that American politicians were going to solve their acute employment crisis by forcing us into the Second World War to again save England’s hide and Rockefeller’s oil. But they weren’t taking any chances.

Germany’s huge dye trust (or chemical cartel) known as the I.G. Farbenindustrie Aktiengesellschaft, enjoyed a monopoly on all chemical products manufactured in Germany. German IG made an alliance with American Standard Oil in order to control important patents. The general idea was that the two were to pool their processes. This was done—in a one-sided way.

With the help of Standard Oil the German behemoth prevented American chemists from learning how to make synthetic rubber until after the Japs took the Malayan Peninsula and its vast rubber plantations. This almost lost the war for the United States.

So, in 1939, when it became apparent that Germany would soon be unpopular in the United States, Standard Oil helped Hitler’s Reich cover its American holdings in the drug and chemical field. The American IG was formed, by taking over the Sterling Products Company, the Grasseli Chemical Works (alias the General Aniline Works), the Agfa-Film Company, the Winthrop Chemical and the Magnesium Development companies.

Standard Oil took 15% of the stock in the new German-American chemical trust. Efforts to hook the DuPont company into this situation partially failed. Among the directors of the “cover up” company were Walter Teagle (President of the Standard Oil Company), Paul Warburg (a Roosevelt-Rockefeller stooge), and Edsel Ford.

Five hundred thousand shares of stock were issued to Walter Teagle. At a later Securities & Exchange Commission investigation Mr. Teagle denied his parentage of this stock, claiming he was holding it as a dummy for someone else.

When asked by the examiner who this “someone else” was he blandly replied he did not know, although he was under oath. Everyone else knew it was either one of the Rockefeller clan in person, or the Standard Oil Company.

The war was getting pretty close to this country. President Roosevelt was setting up the Pearl Harbor disaster, and had ordered our radar defenses let down at 7 o’clock every morning. History records that the Japs accepted this “opportunity” to destroy most of the American Navy, made defenseless on orders from Washington.

When the American doughboys sloughed into Germany, and reached the industrial city of Frankfort, they were amazed to find intact all of the buildings and the huge plant of the German IG Farben Chemical Trust. American aviators, pinpointing their targets, had demolished every other structure in town.

What the doughboys didn’t know was that the Secretary of War, one Robert P. Patterson, was a Rockefeller lawyer, appointed by President Roosevelt upon Rockefeller orders, fresh out of Dillon, Read and Company. The Dillon-Read concern not only is a Rockefeller subsidiary, but was the banking house that financed German IG Farben and attended to the financial details of forming the American “cover up” firm for the German chemical cartel.

Amerian aviators, who gnashed their teeth at their orders to miss the biggest target in Frankfort, have never accepted the weak alibi given them from headquarters. Which was that this juicy and IMPORTANT target shoud be saved because the American Expeditionary Forces would “need an office building” when they got into Germany proper.

With these Rockefeller concerns having all of these things to sell, plus thousands of the 12,000 drug items described and advocated in medical text-books, it was the most natural thing in the world—human nature and human greed being what it is—for the Rockefeller Foundation to be changed into an instrument for “educating” medical students into the excessive use of drugs.