Colombia Politicians with Death Squad Ties may have to Compensate Victims

Parapoliticians may have to compensate victims 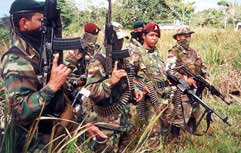 A Colombian Congressional committee on victim reparation is considering making politicians with proven ties to paramilitary death squads partly responsible for the compensations of victims of these groups, the committee chairman told Caracol Radio Tuesday..

According to Senator Juan Fernando Cristo, a member of the Victims Law committee, the proposal was submitted by the Chamber of Representatives. Under the proposal, former politicians with ties to paramilitary groups would be required to assist the state in repaying victims of the conflict.

"We want to make the law extend also to political officials who at a local and regional level contributed to the promotion and strengthening of those [paramilitary] groups and also generated victims," said Cristo.

The Victims Law, initially passed in 2009, regulates compensation for victims of Colombia's armed conflict and is projected to cost about $23.5 million over the next 10 years.

Alterations and additions to the law are being deliberated in the Senate.