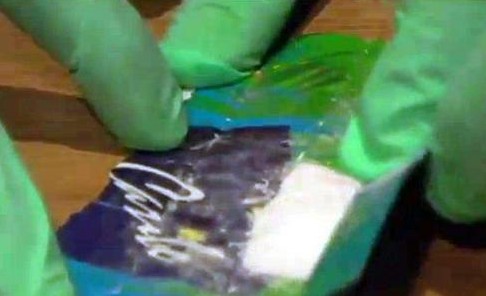 “… Nazi ‘angel of death’ Josef Mengele used scopolamine in interrogations as a kind of truth serum. The CIA administered doses of the drug during its controversial behavioral-engineering experiments in the 1960s, according to John D. Marks’ book, ‘The Search for the Manchurian Candidate.’ Since the 1970s, Colombian criminals have used scopolamine in order to rape women, empty out houses and apartments, and even abduct children. …”

BOGOTA, Colombia — The drug scopolamine is also known as “the devil’s breath” or “burundanga.” The late salsa diva Celia Cruz sang about it. In a recent documentary, Vice called it “the world’s scariest drug.”

That’s because scopolamine provides a potent weapon to Colombian criminals. The drug puts people into a zombie-like state in which they lose both their memory and free will and can be convinced to empty their bank accounts or hand over the keys to their apartments and cars.

“They go out to party and then wake up two or three days later on a park bench,” said Maria Fernanda Villota, a nurse at San Jose University Hospital in Bogota, which receives several scopolamine victims every week. “They arrive here without their belongings or their money.”

Tasteless and odorless, the drug is often slipped into the alcoholic drinks of unsuspecting bar patrons. Last year, Colombian police reported nearly 1,200 cases of people victimized by criminals using scopolamine and other so-called zombie drugs. The victims range from high-profile politicians to US Embassy employees to average Colombians.

Scopolamine comes from the seeds of a family of plants that includes angel’s trumpets and corkwood. They grow in many areas and can be found in the Botanical Garden in Bogota.

The drug has a few legitimate medical uses, such as treatment for motion sickness and for the tremors of Parkinson’s disease. But it’s best known for its darker properties.

Scopolamine blocks neurotransmitters that carry information to the part of the brain that stores short-term memory, said Dr. Camilo Uribe, who heads the toxicology unit at San Jose University Hospital and is a leading expert on the drug. In other words, what happens to people under the effect of scopolamine is simply not recorded by the brain. At the same time, the drug makes people more open to suggestions.

Nazi “angel of death” Josef Mengele used scopolamine in interrogations as a kind of truth serum. The CIA administered doses of the drug during its controversial behavioral-engineering experiments in the 1960s, according to John D. Marks’ book, “The Search for the ‘Manchurian Candidate.'”

Since the 1970s, Colombian criminals have used scopolamine in order to rape women, empty out houses and apartments, and even abduct children.

Last year, kidnappers used the drug on the parents of a 7-year-old girl in northern Antioquia department then took the child. She was rescued two months later. But because victims remember almost nothing about these encounters it’s often impossible for them to provide police with descriptions of the perpetrators.

It’s widely believed that many of these crimes go unreported because they involve married men frequenting bars and bordellos who are too embarrassed to own up to what happened.

“Women are often the culprits,” said Augusto Perez of Nuevos Rumbos, a Bogota organization that focuses on drug abuse.

One infamous case involved three young Bogota women who preyed on men by smearing the drug on their breasts and luring their victims to take a lick. “Losing all willpower, the men readily gave up their bank access codes. The breast-temptress thieves then held them hostage for days while draining their accounts,” Reuters reported.

But men also wield the drug. Bogota music teacher Mario Romero recalled going to his regular bar for a drink and inviting some friends back to his apartment, a group that included a friendly but unknown man. After his other friends departed, the newcomer apparently put some scopolamine in Romero’s whisky.

He woke up the next day to find that the man had taken his wallet and camera and had somehow figured out where he had stashed his jewelry plus a stack of Colombian pesos worth about $600. Romero figures that he must have led the criminal to the hiding places.

“Everything I had was very well hidden,” Romero said. “But you totally lose your will.”

Victims have even been convinced to carry out crimes while under the effects of the drug.

“I can give you a gun and tell you to go kill someone and you will do it,” Uribe said.

Uribe recounted a case in the early 1980s when a Colombian diplomat was arrested in Chile for trafficking cocaine. It turned out he had been dosed with scopolamine then, while under its effects, agreed to carry a stash of cocaine in his diplomatic pouch. The charges were eventually dropped on the grounds that he had been doped.

These days, however, scopolamine is just one of the drugs in the criminal toolkit, Perez said. So-called date-rape drugs, like Rohypnol and Ativan, are often easier to obtain and administer and put victims to sleep for a few hours, long enough to steal their valuables or carry out sexual assaults.

The other downside to scopolamine, from the point of view of the bad guys, is that victims can sometimes become agitated and aggressive and turn on their perpetrators.

“We’ve had cases in the emergency room in which we would have to treat both the victim who was intoxicated with the drug and the criminal whom he had beaten up,” Uribe said.