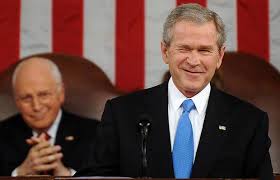 Venezuela says it has imposed travel bans on a list of known U.S. terrorists and human rights abusers.

Former U.S. President George W. Bush and former Vice President Dick Cheney are just two of the names included on a list of U.S. citizens now ineligible for Venezuelan visas. The measures were first announced over the weekend.

The U.S. imposed a series of sanctions on top Venezuelan government officials late last year, claiming they were in response to the violence in the country between February and June 2014. The Venezuelan government however said the sanctions were political. The violence was led by Venezuela’s right-wing opposition, with most deaths caused to government supporters or passersby. Security forces were arrested for the few cases where they were responsible for deaths.

“We will prohibit visas for individuals who want to come to Venezuela who have violated human rights and have bombed Iraq, Syria and Vietnam,” Venezuelan President Nicolas Maduro has stated.

“They cannot come to Venezuela because they are terrorists,” Maduro stated.

In an exclusive interview with teleSUR Saturday, Venezuela’s Foreign Minister Delcy Rodriguez explained that the U.S. Embassy in Caracas will also be ordered to reduce its diplomatic staff. The Venezuelan government says the embassy has over 100 workers.

Rodriguez added that current United States diplomats in Venezuela will have to re-apply for their visas.

She also pointed out that the history of U.S interventionism in the country goes back many years, since Hugo Chavez came to power in 1999. In recent months the United States had increased not only verbal attacks, but attempts to intervene in the Venezuelan political process.

The foreign minister added that the measures were imposed after Venezuelan authorities said they discovered U.S. agents trying to infiltrate coastal communities.

Maduro has argued that the measures are needed due to concerns U.S. officials were involved in a coup plot foiled by Venezuelan authorities in February.

According to authorities, Venezuela’s right-wing opposition plotted to topple the Maduro administration with a campaign of violence, including aerial bombing raids on key public sites around Caracas.

Some of those involved were also in contact with U.S. officials and were offered visas to both the U.S. and U.K., according to investigators.