The Bin Laden Raid – Anatomy of a Sloppy Spin Job

The Bin Laden operation was a success. But the spin control has been a total muddle.

After intoning that the terrorist leader died in a “firefight” late Sunday, the White House has been forced to backtrack with an amended storyline that is less the stuff of myth and more the ugly truth.

"I don't see any evidence of a deliberate plan to mislead, but they should have maintained tighter controls of the message," Bill Schneider, CNN Senior Political Analyst, told TheWrap. "In this poisonous political atmosphere, both sides are always bound to see plots and conspiracies."

Some pundits and journalists are amazed that the administration even took the trouble to correct the record surrounding Osama Bin Laden's killing.

"I'm not giving them a pass, but from a coldly calculated political view I'm surprised they were willing to revise anything because I don't think the costs were that great either way," Marc Cooper, professor at USC Annenberg School for Communication and Journalism, told TheWrap. "It was a small field team and there wasn't any great risk of being discredited."

TheWrap chronicled the changing story, day by day, as facts have emerged to strip the Hollywood sheen off a story that's become -- like Bin Laden -- a moving target.

The president kept his account of the terrorist leader's death in Abbottabad, relatively short and to the point.

However, his account of the circumstances that ultimately led to Bin Laden's death would later draw scrutiny -- particularly his use of the phrase firefight.

"No Americans were harmed," Obama said in his address. "They took care to avoid civilian casualties. After a firefight, they killed Osama Bin Laden and took custody of his body."

Addressing the press the day after the news broke, it is Brennan who introduces the idea that Bin Laden had used a woman living in the compound as a "human shield" -- an account that has been subsequently been disproved.

"Thinking about that from a visual perspective, here is Bin Laden, who has been calling for these attacks, living in this million dollar-plus compound, living in an area that is far removed from the front, hiding behind women who were put in front of him as a shield," Brennan said.

The top aide goes on to insist that the Navy SEALs conducting the operation were not tasked with killing Bin Laden and would have captured him if possible. But Brennan maintains the president's line that Bin Laden's death happened as the result of a firefight.

"The concern was that Bin Laden would oppose any type of capture operation," Brennan said. "Indeed, he did. It was a firefight."

It is Carney who first acknowledges some holes in the administration's initial accounts of Bin Laden's killing.  Though the press secretary maintains that the Al Qaeda head resisted capture, he acknowledges that he was unarmed at the time he was shot.

On the first floor of Bin Laden’s building, two Al Qaeda couriers were killed, along with a woman who was killed in crossfire. 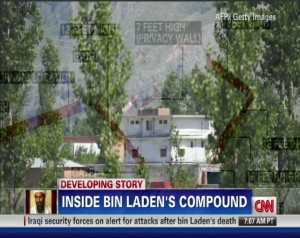 As a guest on Jim Lehrer's PBS show, Panetta also acknowledges Bin Laden was unarmed, but implies he was hostile with the SEALs storming the compound.

"...when they got up there, there were some threatening moves that were made that clearly represented a clear threat to our guys. And that's the reason they fired," Panetta told PBS' Lehrer.

Tuesday, May 3, 8:27 p.m (ET) | Unnamed Senior Congressional Aide, Says Bin Laden Surrender Would Have Had to Take Place in the Nude:

"He would have had to have been naked for them to allow him to surrender," the aide explained to the Los Angeles Times.

Wednesday, May 4 | U.S. Attorney General Eric Holder, to the Senate Judiciary Committee, Says All It Takes for Self-Defense Is No Surrender:

In more shifting logic, Holder drops Panetta's claims that Bin Laden was acting in a hostile manner and instead argues that the terrorist's killing was justified simply because he did not surrender.

"It was justified as an act of national self-defense. If he had surrendered, attempted to surrender, I think we should obviously have accepted that, but there was no indication that he wanted to do that and therefore his killing was appropriate," Holder said.

Noticeably absent in this latest moment of story juggling are any descriptions of "threatening" or "hostile" moves or attitudes on the part of the dialytic Al Qaeda head.

Wednesday, May 4 | The New York Times, Reports There Wasn't A Whole Lotta Shooting Going On in Abbottabad:

The Times quotes administration officials who acknowledge that Navy SEALs encountered minimal resistance in their raid of the Bin Laden compound. In a further wrinkle, it turns out the only shots came at the beginning of the raid after Bin Laden’s  courier fired from behind the door of a guesthouse.